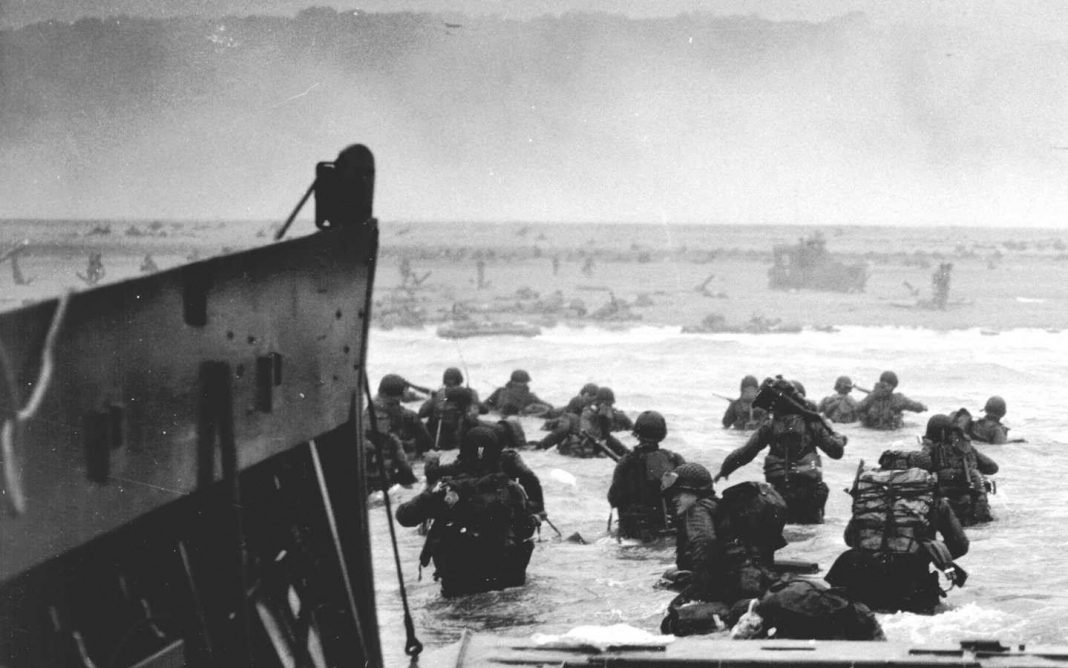 Operation Panzerfaust was a military operation undertaken by German Wehrmacht in order to ensure that the Kingdom of Hungary remains its ally. Hitler had received word that Hungary’s regent was planning to surrender to the Red Army. Hitler did not like this one bit as he feared Hungary’s surrender would expose his Southern Flank. Hungary’s regent Miklós Horthy was going to send his son to negotiate with the Red Army. Hitler then sent his Waffen-SS commando Otto Skorzeny on a military operation to kidnap him. Skorzeny successfully kidnapped Horthy’s son Miklós Horthy Jr.

Meanwhile, Horthy announced on national radio that he had signed an armistice agreement with the Soviets. But the Germans were already aware of this and hence they had already made plans to replace Horthy with someone who was more loyal to them. At the time Horthy was ruling from Castle Hill in Budapest. Skorzeny then moved into the Vienna gates of Castle hill. He was accompanied by a group of German soldiers and tanks. Seeing this Horthy realised that he could not fight back and declared no resistance.

Horthy was arrested and kept overnight in the Waffen-SS offices. He was then allowed to go to the palace and collect his belongings. Once there he was given a typewritten statement to sign. This statement proclaimed that Horthy was revoking the armistice with the Soviets and renouncing his throne in the favour of Ferenc Szálasi, the leader of the arrow cross-party. Horthy was surprised at this. Horthy’s prime minister Lakatos then told him he must sign it as his son’s life is at stake. Horthy realised that this was in fact a coup d’état and signed the statement. Operation Panzerfaust was the military operation preceding Operation Margrethe, which was the German occupation of Hungary.

Operation Greif was a special military operation undertaken by the commando of the military branch Waffen-SS. This famous World War II military operation took place during the Battle of the Bulge. Operation Greif was created by Adolf Hitler. The goal of this operation was to capture the bridges over the Meuse river before their destruction. The head of this operation was commando Otto Skorzeny. Skorzeny formed a special group for this operation, called Panzer Brigade 150. Hitler then instructed the brigade to don the uniforms of the U.S. Army. Doing so would result in a few losses. Additionally, they could cause confusion and chaos within the Allied forces.  Skorzeny then gathered the best English speaking men and established the brigade.

The operation was quite successful.

In one instance, they managed to send an American regiment in the wrong direction, while in another, they persuaded the U.S. Army to withdraw from Poteau. Additionally, they destroyed telephone lines and switched road signs.

Once the U.S. Army started realising that there are some sham soldiers amongst them, they started panicking. The panic caused by Operation Greif was so widespread that the army started seeing saboteurs and spies everywhere. To flush out the enemies they started asking troops questions they thought only Americans could know the answer to. As a result of the panic, many American soldiers were detained as well.

After World War II Skorzeny and his brigade were tried and found guilty of violating the rules of the war. Additionally, they were charged with the improper use of U.S. Army uniforms.

Operation Eiche or the Gran Sasso Raid was an operation personally ordered by Adolf Hiter. It was the infamous rescue of the Italian dictator, Benito Mussolini. This operation took place shortly after the arrest of the dictator. After Italy’s invasion by the Allies, Benito Mussolini was expelled and arrested by the King of Italy. Hitler handed Mussolini’s liberation over to Otto Skorzeny of Waffen-SS. Skorzeny then tracked Mussolini to a hotel at the peak of Gran Sasso. There was no easy way to reach the hotel so he planned a risky and daring aerial raid. Along with his SS-troopers and paratroopers, he raided the hotel and successfully liberated Mussolini. Skorzeny flew him to Austria. Mussolini spent the next several months as a puppet leader in Northern Italy. But not before long Partisan forces killed him in April 1945.

Operation Mincemeat is a famous deception military operation. It was a British operation to hide the 1943 Allied invasion of Sicily. The British made use of a dead body of a tramp for this operation. They dressed the tramp as an officer and put a fake id on him. The tramp was given a fake identity as Captain William Martin.  They even planted a fake correspondence on him suggesting that the Allies planned to invade Greece and Sardina, and Sicily was merely a cover for them. The Royal Navy then secretly deposited his body near the coastline of Sothern Spain. The Germans intercepted the message and fell for the ruse. They shifted their forces to Greece and Sardina. On the other hand, Sicily received none of the reinforcements. It is an understatement that the Germans were caught off guard when the Allies invaded Sicily in 1943.

Operation Gunnerside was a famous military operation which took place at the hydroelectric power plant in Nazi Germany-Occupied Norway. At the time, this plant at Vemork was the only one in the world which produced heavy water. Heavy water was a crucial element for the creation of the Atomic bomb. The Allies feared that the German would make use of this. Hence they came up with different operations to sabotage the plant. One of the operations was Operation Gunnerside.

On the chilly night of February 27, 1942, 9 Norweigian commandos skied and climbed to the plant. The SOE-trained men skied through harsh conditions. Once at the outskirts of the plant, the men had to dodge the German patrol and minefields. They entered the plant through a cable duct and planted bombs on the electrolysis chambers of the plant. As the men made their getaway, the bombs detonated inside and essentially destroyed the facility. They even left behind a Thompson submachine gun, to signify that this was the work of the British forces.

Operation Gunnerside was accompanied by the Allied bombings which essentially shut down the plant. The Germans then attempted to take the remaining heavy water back to Germany, but they were unsuccessful. The Norwegian resistance agents found the ferry carrying the heavy water and sank it.

Operation Bodyguard is another famous military operation. By 1943, the German forces had captured much of Europe, the Allies then planned to make the beaches of Normandy as the centre of an invasion which would change the outcome of the war. The motive of the operation was to mislead Hitler about the time and place of the invasion. The Operation Bodyguard consisted of many sub-operations which culminated into the tactical invasion of Normandy. An event called the Normandy Landings or the D-Day. The Allies went on to administer a series of deceptions and by 1943, Hitler had no clear idea as to where the invasion would take place. This led him to defend the entire Western coast of Europe.

The main motive of Operation Bodyguard was to make Pas De Calais appear as the main place of the invasion. At the same time, they wanted to hide the actual time and date of the attack. Through this deception, they wanted to keep the German Forces in Pas De Calais and other parts of Europe, at least for 14 days after landing at Normandy. The deceivers under Operation Bodyguard were meant to deliver a deceptive scenario to the German forces. They did this through various sub-operations. The operations involved visual deceptions, double agents and misleading radio traffic.

The operation was ultimately successful. It was instrumental in delaying the 15th Army in Pas De Calais for 7 weeks. Hence allowing the Allies to establish a beachhead at Normandy, which subsequently helped them win the Battle of Normandy.

The main objective of the operation was to deceive the Germans into thinking Pas De Calais was the place the Allies would be making landfall at. A number of deceptions were employed. A most notable one is the creation of a fake force called the First U.S. Army Group (FUSAG). The Germans were deceived into thinking that the FUSAG would charge an invasion in Pas De Calais. Additionally, they spread false information that the famous U.S. General George Patton would be leading the army. Other means employed by the operatives were the use of double agents who gave the Germans misleading information. Moreover, they used dummy tanks and inflatable aeroplanes to create a visual deception.

The main objective of Operation Fortitude North was to deceive the Germans into expecting an attack on Norway. The deception relied entirely on special means. It included fake radio traffic to mislead the Germans. Operation Fortitude North also employed fake troops. Additionally, the British media also played a key role in the operation. They provided fake football scores and wedding announcements to the phantom troops. The operation was so successful that Hitler had posted 13 army divisions in Norway by the spring of 1944.

Want to know some interesting WW1 Facts? Click here  Pigeons, dogs and Kings. These 12 World War I Facts will blow your mind

Previous articleCIA planned a false flag attack called Operation Northwood to justify war with Cuba. They called it “Justification for U.S. Military Intervention in Cuba” John F.Kennedy rejected the proposal.
Next articleWhen Yuri Gagarin visited Manchester in 1961, it was pouring down. But he insisted on keeping the roof of the convertible open. He said “ If all these people have turned out to welcome me and can stand in the rain, so can I”