13 Facts About The Mystical, Whirling Dervish 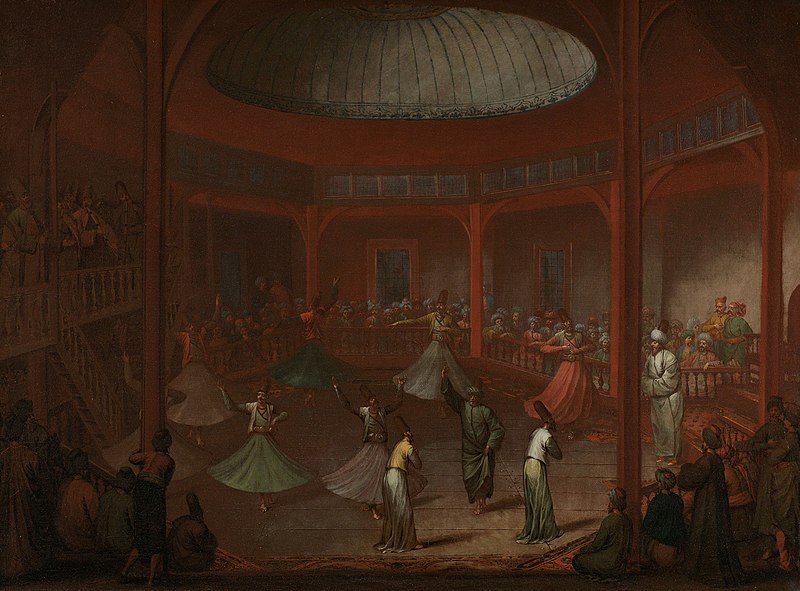 The image of the mesmerising Whirling Dervish performed by dancers in white robes, spinning in a trance, seems dreamy. Over 800 years old, this dance is a form of physically active meditation. Take a look at some of its history, beliefs, and, most importantly, the swirls’ significance in the Whirling Dervish.

1. Mystical poet Rumi founded the Whirling Dervish while walking towards a Goldsmith

The renowned Sufi Muslim mystic and poet, Jalaluddin Rumi of Turkey, started the Whirling Dervish in the 13th century. Rumi was walking towards a goldsmith, but he danced to the melodic sound of the hammer. Since it was a whirling dance, Rumi grew dizzy; through which, he entered a beautiful trance. He became ecstatic and claimed that although the sound of gold left, Rumi felt God.

2. He chose dance and music to feel the essence of the Divine

He preached to his followers that there might be several roads that lead to God. However, he chose the one made of dance and music. Rumi would meditate, fast and dance that took him to a state of enlightenment.

3. The Whirling Dervish comes under the Mevlevi order

Inspired by Rumi, several other sects took to his dance, known as the Sema and spread it throughout the Ottoman Empire. The most famous sect called the Mevlevi order had dance participants known as Semazen. By the 15 century, the Mevlevi order introduced rules to be followed while undertaking the ritual to maintain the various traditions.

4. The dancers wear hats that symbolise the tombs of their egos

Whirling Dervish dancers don white long robes with full skirts. This is a symbol of the covers of their ego. On their heads, the dancers wear a Sikke, a tall, conical hat. These are usually brown, gray, or black, depending on their sect. The Sikke is a representation of their ego’s tombs. Over this, the dancers don dark, long cloaks that signify detachment from worldly pleasures while immersing themselves in the ritual. The cloak is later removed during the ceremony and when the dancer is found dancing in just the white robe, he is said to be without fault and ready to do intricate whirls that define the Sema.

5. The Dervishes fast for several hours before they begin the ritual

The dancers fast for many hours before they begin the Whirling Dervish. While twirling, they propel the left foot around the right, with their eyes open but not focused. The complex twirls are accompanied by great music made of a singer, flutist, a cymbal player and a kettle drummer. The music of the Whirling Dervish is repetitive. It is usually built around the Zekr (or Zikr), which is about memory and memory kindled by practice. The powerful rhythm sounds like a heartbeat, which gives both the dancers and the viewers a mystical intoxication of the Sema.

6. According to research, the skirts accelerations are about “four times Earth gravity”

As the dancers swirl, their skirts lift and look like circular cones. Research states that the edges of these skirts experience accelerations “of about four times Earth gravity” and that the skirts “carry cusped wave patterns which seem to defy gravity and common sense.” The Whirling Dervish creates an invisible, translucent and powerful energy just like how light is reflected from a mirror. The swirling skirt moves in the form of waves and an aura develops around the dancer’s body.

Turkey’s very first president, Mustafa Kemal Ataturk, closed all hermitages and orders in 1925. He did so as part of his secularisation system. For several decades, the Whirling Dervish was nowhere to be seen. However, in 1956, the government revived it, calling it a cultural asset.

8. The Whirling Dervish celebrates a nine-day festival in honour of their master, Rumi

Dancers began to perform on the death anniversary of their master, Rumi. The tradition in Konya lasts nine days in December. During this festival, the dervishes attempt to spread their cultural asset outside of their country to preserve their Sema traditions. They wish to preserve the dance in its original form and not as a tourist attraction only.

9. Every movement of the dance symbolises a connect with the universe

While whirling, the dancers open their arms out with their right hand directed towards the sky. This is done as a representation to receive God’s blessings. The dervish’s left-hand faces down towards the earth and symbolises a willingness to display God’s spiritual gift to those viewing the Sema. The Whirling Dervish believes that twirling from right to left around on’s heart embraces humanity with love. This goes with the fact that Sufis preach that humans were created with love to love.

10. Age does not matter in this dance form!

Enlightenment does not come with an age barrier. Although the Whirling Dervish is instructive, dancers spin spontaneously because of the enjoyment. This is seen most of the time in young dervishes. As we grow, we lose the spontaneity in us and dance forms like Whirling Dervish take one back to childhood and relive several sensations.

11. Anybody can master Whirling Dervish and attain the “mystical intoxication”

You dont need to be from the community to learn the Whirling Dervish. Anybody can master the whirling and spinning techniques if you believe in yourself. Although you are aware of your limitations, one must love oneself and others to master this art form. With time and extensive practice, anybody can gain the power to embark on a journey of mystical intoxication and liberation of the soul.

12. How do Dervishes not get dizzy?

After all this information, you must be dizzy already and wonder how these dancers don’t feel so? Well, they do and it is quite normal to feel disoriented. Moreover, it is an essential part of the dance as it allows the dervishes to enter a state of mystical intoxication or ecstasy. However, the intensity of this varies from person to person.

13. Can women do the Whirling Dervish too?

As per the tradition, only men can dance the Whirling Dervish. However, things are beginning to change now. For example, in Istanbul, both men and women can take part in the ritual together.

Inspired by the article? You may like this article on 19th Century Fashion.

Here is a fun facts about the Cossacks reply to the Turkish Ottomans surrender order.