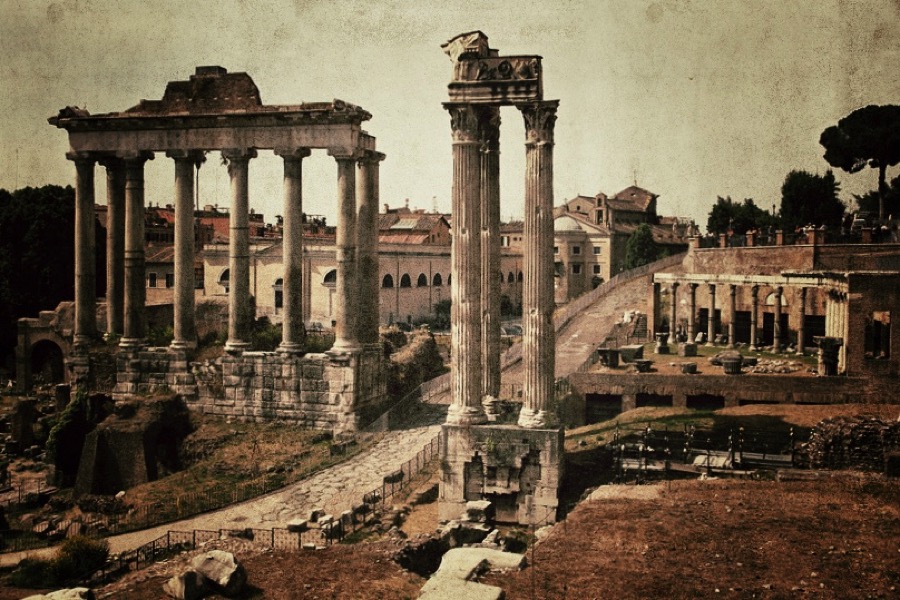 The Roman Empire was an important part of the Ancient World. It produced some of the greatest rulers, thinkers and engineers in history. Some of the Roman architectural wonders such as the Colosseum still stand today. Romans are in fact significantly responsible for shaping today’s modern world. Hence we have compiled a list of some Roman innovations that we still use today.

Jem Duducu is @JemDuducu on Twitter and Facebook and the Author of the Romans in 100 Facts published by Amberley Publishing.

Read about the top 7 Roman innovations we still use today

1) All roads lead to Rome

The oldest paved road in history is in a quarry in Egypt and is about 4,600 years old. In the 5th Century BC, King Darius of Persia ordered the construction of the ‘Royal Road’, which stretches over 1,600 miles, but not all of it was paved nor was all of it straight.

The Romans could see potential; they borrowed the idea and enhanced it. Straight, paved roads improved communication, trade and the movement of armies. At the peak of the Roman Empire, there were 29 military highways radiating from the capital, with 113 provinces interconnected by 372 roads, nearly a quarter of a million miles of roads in total. At the time (and for years to come), this was the most connected empire the world had ever seen.

But roads are expensive to build and maintain, and only 20% of Roman roads were paved in stone. This means that 80% were either dirt tracks or had only a gravel covering, which degraded over the winter months. And the stone roads weren’t always all that great either. The Vindolanda Tablets are a series of postcards discarded at a fort on Hadrian’s Wall. It is interesting to read some of the complaints about the state of the roads that the soldiers travelled, showing that maintenance wasn’t always a priority. However, we can surely credit the Romans for this innovation that we still use today.

2) The Romans copied the Greeks…a lot

The Roman civilisation only got into its stride in the 3rd century BC; however, by then the Greeks had been cultivating their civilisation for centuries.

Roman architecture is an interesting example of influence. The very first structures in Rome were circular, implying a Celtic influence, but over time, that all changed. The Romans could have taken their ancestral influences and fossilised them into stone structures; instead, we begin to see the columns and triangular pediments that had been all the rage in Greece for centuries.

Another example of the Greek influence on Rome is the pantheon of gods, renamed by the Romans, but in terms of myths and imagery, completely interchangeable with the gods of the Greeks: Zeus was Jupiter and Aries was Mars. Additionally, Vestal virgins, soothsayers and oracles are all in Greek culture.

The Roman republican system was based on Athenian democracy and lasted far longer. The Olympic Games flourished under Roman rule, and even chariot racing seems to have originated from Greece.

3) The Romans sort of invented concrete

There is a form of concrete that is naturally occurring, so, technically, it predates humans. However, around 1,200 BC, the Mycenaeans made floors in concrete, and even the Bedouins in North Africa had, independently, created their own concrete before the Roman era. But it was the Romans who used it extensively and consistently from around 300 BC, right up to the fall of Rome in the 5th century AD. Indeed our word ‘concrete’ comes from the Latin concretus, meaning ‘compact’.

Ironically, the Romans didn’t use the Latin word concretus; they called it ‘opus caementicium’. It was a mixture of water, quicklime, sand and volcanic ash. They recognised that the use of a quick-drying, liquid material made the building of arches and domes far easier than trying to build the same feature in brick or stone. It was also far cheaper and quicker than building a large structure from solid marble. It was the Romans who developed the idea of making the framework in concrete, then cladding it with stone. The Coliseum is an example of a large, mainly concrete, Roman structure.

Augustus famously said, “I found Rome a city of bricks and left it a city of marble”. It’s a great line that underscores his achievements as emperor, but he missed out the most important Roman building material – concrete.

The Julian Calendar was not the first calendar, but it has been the most influential in European history. It has a regular year of 365 days, divided into twelve months. A leap day is added to February every four years. However, that isn’t quite as long as a year really is, and while the discrepancy is tiny, the calendar year gained about three days every four centuries. So over long periods of time, it needed adjustments, and changes were brought into effect in 46 BC.

Julius Caesar didn’t put his name to the month; this was done later in his honour when the old Quintilis was changed to Iulius (July), and the old name for the eighth month, Sextilis, became Augustus (August).

The Julian Calendar worked well for over a millennium, but the year isn’t exactly 365 ¼ days long, so over the centuries, the discrepancy began to cause problems. Once again what had been in use was refined and recalibrated in 1582 to become our modern-day Gregorian Calendar.

5) The Romans were Masters of Siege Warfare

The Romans didn’t invent siege warfare, but they certainly mastered it. The Siege of Alesia was won when the Romans built a wall to envelop the Gauls. This was by no means the only time this was done. For example, at the Siege of Aracillum, a generation or so later in 25 BC Spain, the Romans tried the same tactic, and it worked again as the defenders either starved or committed suicide.

When such a tactic was not possible, the Romans had a number of weapons to bring a siege to a successful conclusion by using siege weapons.

Some popular Roman siege weapons were:

The ballista- what the modern world would call a catapult; it hurled stones (and sometimes pots of Greek fire, the ancient equivalent of napalm). Depending on circumstances, they also could be mounted on warships. The Romans were exceptional engineers who could usually determine the weak spots in defenders’ walls and would keep pounding them until they came down. A later version of the ballista was called an onager, which did pretty much the same job but was cheaper and easier to build.

The Scorpio– a large version of the crossbow. It could fire bolts over long distances (well out of the range of enemy archers) and killed careless defenders on the city walls.

The siege tower– a complex and fearsome weapon. It was a moveable wooden tower, designed to be rolled up to enemy walls, allowing the troops inside to descend onto the enemy defenders. They took time to build and needed ramps, which allowed the defenders to see what was coming and gave them time to prepare a counter-attack. But when siege towers were deployed, more often than not, they got the Romans over the walls. If all of these failed, a battering ram could be used against the defenders’ gates. The rams were protected by a wooden gallery covered in wet cowhides to stop them being burnt by the defenders.

Once the enemy walls were breached the Roman soldiers would advance in a testudo (tortoise) formation. This involved covering their heads with their rectangular shields, with other shields protecting their front and sides. Such a formation absorbed arrows and small rocks, giving the men valuable time to get to the breach relatively unharmed. It is fair to say that if the Roman legions made it as far as an enemy city or fort, the defenders were at a disadvantage, no matter how high or how thick their walls. 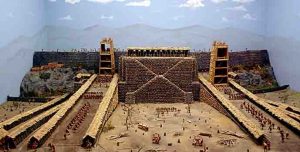 Not all Roman innovations were successful. In 283 AD, the Emperor Numerian (who hadn’t been emperor for long) was killed by the Praetorian Guard. He was replaced by Diocletian, a man of low birth, who had risen through the ranks in the army. He solidified the idea of the ‘tetrarchy’, a system of sub-emperors, each one ruling over a number of provinces, all reporting to him. This meant that local issues could be dealt with locally and that power was shared (to a certain extent). Obviously, a sub-emperor could go rogue, but after decades of war and strife, the tetrarchy was a welcome idea that brought peace.

By 300 AD, however, the empire was facing economic problems: free trade had broken down in some areas and prices were rising. Diocletian didn’t help the situation when he embarked on a public building programme on a scale not seen for generations.  All of this cost money.

First, he overhauled the tax system, which eliminated ingrained inefficiencies.  He also recognised that the coinage had been debased to an extent that confidence in the Roman currency had diminished, so he reminted and revalued all of the coins. This sounds like a good idea, but rising costs continued to rise even faster, creating a huge spike in prices. Diocletian responded by setting price caps on most resources. The penalty for disobeying the new government set price? Death.

The system of fixed prices was widely despised, and almost as soon as it was introduced, it was generally ignored.  The law of supply and demand dictates that if someone needs something badly enough, they will pay over the odds. Under the circumstances, the black market boomed. Fortunately, the situation in 301 AD didn’t last long as, once the new coinage had a chance to embed itself in the Roman economy, prices began to normalise.

Diocletian was also highly unusual in the history of Roman Emperors in that, in 305 AD, he voluntarily abdicated in favour of the two-emperor system. He then retired to the area of his birth on the Dalmatian Coast (modern-day Croatia), where he lived out his days in splendour and spent his time cultivating cabbages.

7) A famous and important Roman innovation- The Book

The book was an original Roman innovation. The first recognisable alphabet, and therefore writing, developed in ancient Babylon around 3,100 BC. This writing was done on clay tablets, not the most portable of formats for written literature. The Egyptians made a leap forwards with papyrus, thin sheets made from the pith of the papyrus plant. Now knowledge could be preserved on scrolls, which were easier to transport, but still bulky. Paper itself was invented around the end of the 1st century AD in China but didn’t reach Europe until after the fall of the Western Roman Empire.

It was, however, around the same time that paper was being invented in China, that the Romans invented the codex.  For the first time, sheets of uniform size were bound together along one edge, in between two larger, stronger protective covers.  And again for the first time, large amounts of written information could be concentrated in one highly transportable volume.

This would become the standard way to write and store information until the rise of the e-book 1,900 years later.  Across the empire (both during and after the Roman era), the book became the standard format for writing. Most famously, the word ‘bible’ is a variation of the Greek word for ‘the books’ (ta biblia). The invention of the book enabled the much easier sharing of complex ideas, everything from Christianity to annals about emperors.