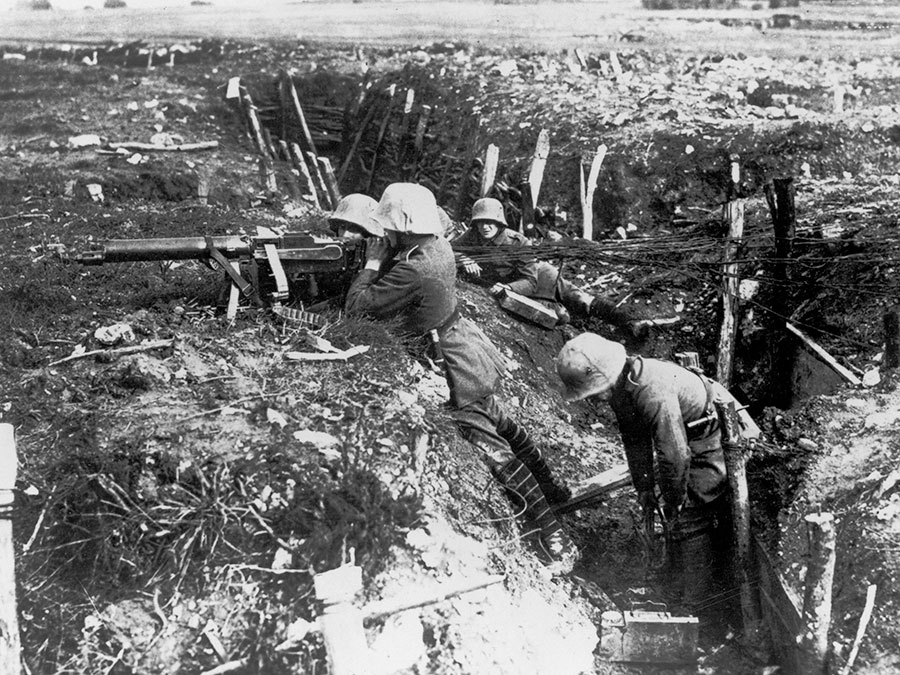 Humans always proved themselves as adaptable and capable when it came to ways to kill and survive. The same goes for the technological advancements of weapons used in the WW1 or World War 1. Popularly known as the Great War, it was fought between July 28, 1914, and November 11, 1918. Although the war caused almost 20 million people’s unfortunate deaths, we cannot neglect the various weapons and artillery explored and founded.

Here are 8 facts about some of the most brilliant weapons used during WW1.

1. Germany made over 650 flamethrower attacks in WW1

It is rumoured that infantry in ancient China used a kind of flame-throwing device. Another claim made by some Southern newspapers was that Abraham Lincoln observed such a weapon’s test during the American Civil War. But only on February 26, 1915, was the use of hand help flamethrowers recorded for the first time. The Germans brought the weapon into action at Malancourt, near Verdun. Men carried tanks and sprayed fuel oil with the help of the nitrogen pressure. As the oil left the muzzle of a hand directed pipe that was small in size, it ignites. Throughout the war, Germany made over 650 flamethrower attacks. Although the British and French developed flame-throwing weapons, they did not use them as much as the Germans did.

2. Many thought machine guns could replace the rifle, but they were wrong

Most World War 1 machine guns drew inspiration from Hiran Maxim’s 1884 design. The weapon used in WW1 sustained fire of 450-600 rounds per minute. This allowed defenders to cut down any attacks from enemies effectively. At one point, there existed speculation that machine guns would completely replace the rifle. However, unlike most people’s notion, machine guns weren’t World War 1’s most lethal weapon. That tag undoubtedly went to the artillery.

3. Artillery was the most lethal weapon used in WW1

World War I marked the leap from traditional weapons to increased lethality amongst artillery. This included improvements in gun design, ammunition and range. The fact that artillery was World War I’s most lethal weapon was no surprise as it killed more people than any other weapon did. Some gigantic guns could send projectiles so far that the engineers sometimes had to consider the earth’s rotation when plotting a fire. Although a smaller field gun, the French 75 mm cannon gained a reputation as the “Devil Gun” among the German opponents. The “Devil Gun” was so famous that it made a cut into the Second World War. It was modified into anti-tank guns by some Germans; however, it did not gain much success.

4. Mortar weapons used in WW1 could fire up to 22 shells per minute!

These existed before, but the mortar weapons used in WW1 proved to be much better than their predecessors. In 1915, the British came up with the Stokes mortar design, which had no moving parts. Yet, it could fire up to 22 shells of three inches per minute. It possessed a range of 1200 yards too. The Germans created the minenwerfer, or “mine thrower.” It was a mortar with a barrel of 10 inches and fired shells loaded with metal balls.

5. The American Springfield weapon used in WW1 was identical to Mauser’s M1989

Almost all nations during the First World War used more than one kind of firearm. The most popular ones used among the Allies of the major combatants were Lebel and Berthier 8mm (France), Mosin–Nagant M1891 7.62 (Russia), Lee-Enfield .303 (Britain and Commonwealth), Mannlicher–Carcano M1891, 6.5mm (Italy) and Springfield 1903 .30–06 (USA). Most of the Central powers used Mauser M98G 7.92mm (Germany), Steyr–Mannlicher M95 (Austria-Hungary and Bulgaria) and Mauser M1877 7.65mm (Turkey). The American Springfield made use of a bolt design that was very similar to Mauser’s M1989. It was almost a carbon copy of it due to which the American government had to pay Mauser a licensing fee. This practice continued till America was part of the war.

6. Aircraft used in WW1 went from detecting enemy locations to shooting them

World War I’s air war proved several political and military leaders wrong as even today; it continues to fascinate. Initially, the new technology was used only to observe enemy locations. However, in no time, engineers launched long planes with machine guns. Pioneer aircraft manufacturer Anthony Fokker came up with a method to synchronise a machine gun fire with a propeller’s rotation. From then on, the aircraft became one of the most potent weapons used in WW1.

Early aircraft showed kite-like designs and were flimsy, made of lightweight wood, wires and fabric. 1914’s 80-120 horsepower engines produced tremendous speeds of 100mph, which doubled four years later. Although pilot safety was questionable, most pilots disdained the use of parachutes.

In a few years, Germany developed the most massive multi-engine bomber, the Zeppelin-Staaken R.VI. It had four engines and a wingspan of 138 feet, with a range of about 500 miles and a bomb load capacity of 4,400 lbs.

7. Submarines would shoot and disappear underwater in seconds

Germany began the development of submarines or Unterzeeboats reasonably late in 1906. Countries like Britain, France, Russia and the United States of America started its production much earlier. Despite this, World War I’s submarines are mostly associated with the Imperial German Navy, which suffered a more significant loss in naval strength than Britain’s Royal Navy.
Torpedo quality of the submarines improved and they developed longer-range U boats. Submarines could strike beneath the waves unseen with torpedoes. They could also come to the surface to use their deck gun. Low riding subs would attack a convoy of ships and dive in a swift. However, submarine warfare was banned due to an unsuccessful post-war effort.

8. Although poison gas was not as lethal, it could incapacitate

German artillery fired chlorine gas from cylinders on April 22, 1915, in the Ypres area. This marked the beginning of gas attacks in World War I. Chlorine gas took a toll on the respiratory system and eyes. On the other hand, mustard gas caused blisters on exposed skin. When compared to other weapons used in WW1, fewer people died from gas poisoning. Many returned to service after treatment. However, the weapon spread terror as it incapacitated several. Following the war, the use of poison gas was banned by international law; however, it was used in the Iran-Iraq War.

Now that you know of the greatest World War 1 weapons, why do you think the U.S entered the Great War? Check out the answers here!