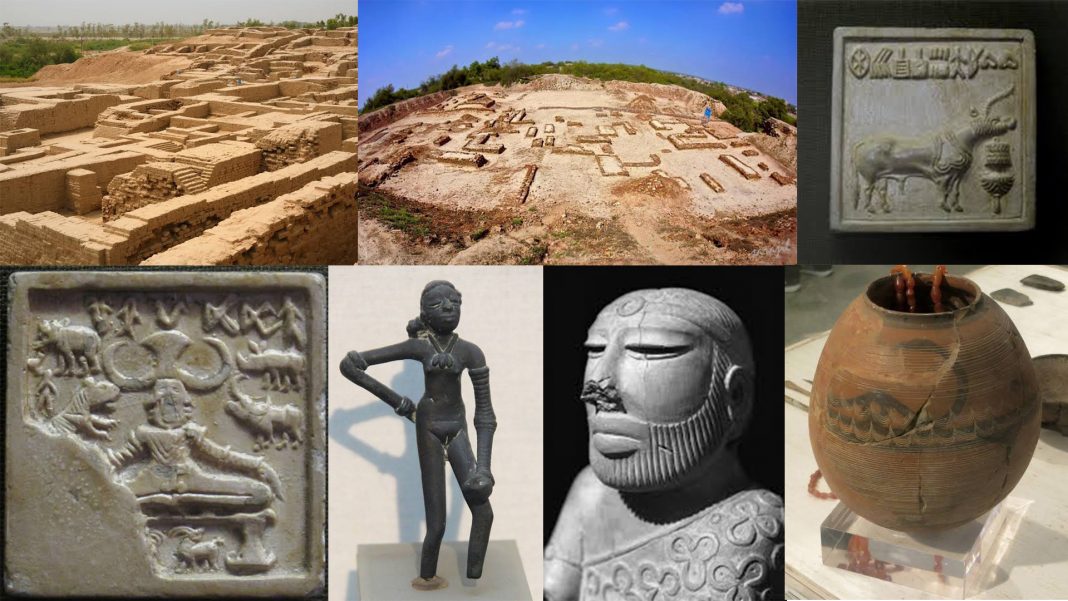 1. Discovery of the Indus Valley civilisation

The earliest example of urban culture, the Indus Valley civilisation or the Harappan civilisation belongs to the Indian subcontinent. Records state that they date back to 2500 to 1700 BCE, while the southern states may have lasted till 2nd millennium BCE.

The existence of the community was identified at Harappa in Punjab in 1921. Mohenjodaro, near the river Indus in the Sindh region, was also regarded as the civilisation’s spot in 1922. Both sites are part of present-day Pakistan and Sindh. The ruins present at Mohenjodaro was made a designated UNESCO world heritage site. Several traces of the civilisation have been found in very far apart, from Balochistan province’s Sutkagen Dor in southwestern Pakistan to Delhi’s Yamuna river basin in India.

The civilisation consisted of two large towns, Mohenjo-Daro Harappa. It had several hundred other cities and towns as well, but they were smaller in size. From records, we know that both cities would have been around 1 mile square in dimension. Their great magnitude suggests great political hold. This might have existed in both the states or in a massive empire with other capitals. The Indian subcontinent once followed ruling that way.

Some records state that Harappa might have succeeded Mohenjo-Daro, which suffered several floods and was destroyed. The Indus Valley civilisation was very literate with a script of 200 to 500 characters. The text was tentatively and partly decoded, which says that it followed the Dravidian language.

Apparently, the civilisation took inspiration from the model that the Mesopotamians followed. They took advantage of the fertile Indus river that both fertilised and destroyed when it flooded annually. Hence, one of their most significant causes for success was their irrigated agriculture. After deducing a secure hold on the plain, the citizens fought several problems. Due to this, the Indus Valley civilisation flourished and had a high population.

Along with the earliest traces of cotton, the people of this civilisation grew wheat, barley, peas, mustard, dates and sesame. They domesticated animals such as dogs, cats, cattle, fowl, pigs, buffalo and camels. The localites might have domesticated Asian elephants as well and used its ivory tusks. They brought minerals from far away if the alluvial plain did not provide them. Southern India and Afghanistan imported gold, northwestern India and Afghanistan imported silver and copper to the cities. Iran gave turquois and southern India sold a jadelike fuchsite to them.

The small seals are some of the best-known artifacts of the Indus Valley civilisation. This was usually made of steatite, which is unique in quality and kind. On these seals, many animals, including elephants and other composite creatures, were displayed. Sometimes, humans were seen as well. Sculptures of gods and goddesses made of Indus stone were found. There are several terra cotta figures as well.

4. Decine of the Indus Valley Civilisation

We don’t exactly know how the civilisation came to an end. But what most historians agree is that the end of Mohenjo Daro was instantaneous. Raiders attacked it in the mid 2nd millennium BCE and they left many to die. However, who these raiders were is a matter of discussion. According to the Rigveda, an old book, one of their earlier invaders were the Aryans from the north.

However, every historian agrees that the city was in an evident economic and social decline before its decline. Severe floods were beginning to destroy it. Homes looked shoddy, which was a sign of overpopulation. Although the final blow was sudden, the city was on the verge of death. Evidence suggests that poverty-stricken cultures succeeded in the Indus Valley civilisation. They drew little inspiration from the sub-Indus heritage and the rule in Caucasus and Iran. For many centuries after, urban culture was dead in the Indian subcontinent’s northwest region.

However, towards the south, in Kathiawar and beyond, things were different. Evidence suggests that there was cultural continuity. They formed a bridge between the decline of the Indus civilisation and India’s Iron Age civilisation at around 1000 BCE.

5. Proof that the Indus Valley civilisation was way ahead of their times

The civilisation was technically advanced and sophisticated and Harappa and Mohenjo Daro are proof of that.

They used baked bricks to build homes. Some customised their homes to get more wind and natural air conditioning. The people had their version of flushing toilets! Perhaps they built the world’s first sanitation system and even the 18th century Europe took inspiration from their drainage system. Their drains beat the ones in South Asia.

B. The public bath

“The Great Bath” was Mohenjo Daro’s public bath. We don’t exactly know what its use was, maybe rituals. But two monumental staircases led to the pool and it had a hole that sucked out the water at the end of the day.

The civilisation was the first to use buttons and step walls. Although this may not hold much relevance now, at that time, with no technology, it must have been a task to innovate. They made buttons out of seashells and Mohenjo Daro had the oldest one, which is about 5000 years old.

Several historians compare the Indus Valley civilisation to heaven. It is incredible to know that with a population of almost 5 million people, there was peace. Archeologists never found traces of warfare or murder in the 1050 sites that they dug on, a contrast to the Egyptian civilisation.

For some interesting, never before heard facts about India, click here.

Previous article9 Bizarre Facts about Nikola Tesla that you won’t believe are true!
Next article12 facts about ice cream that you will enjoy reading