The Tudors belonged to the Welsh-English royal house ‘House of Tudors’. Their house ruled over England and Wales for almost 118 years. The royal house was responsible for giving England two of its most well-known rulers Henry VIII and Elizabeth I. For the Tudors, fashion was vital. Tudor King Henry VIII even passed sumptuary laws to govern fashion. Clothes became a symbol of wealth, power and status.

Let us look at 22 Interesting Facts about Tudor Fashion

1) What fashion meant for the Tudors

Fashion was highly regarded by the Tudors. Additionally, there were specific rules as to what one could wear and not wear. Our knowledge of how they dressed and presented themselves comes from the numerous portraits of Tudor nobility.

The high society men wore white silk shirts which were frilled at the neck and wrist, over this they wore a tight-fitting shirt called a double. Along with this, they wore woollen socks or stockings.

During the eras of Mary I and Elizabeth I, the necklines started creeping higher and carefully pleated ruffs were worn. These were considered fashionable throughout their eras. These ruffs were wide and flat and had an underpropper usually made of wire. Additionally, a special laundress was employed to clean them every day.

4) The knights and heirs wore rich material such as silk, velvet and satin. They wore girdles, pantofles, cloaks, coats, jerkins, and coifs.

The upper-class Tudor women would showcase their status through their detailed silhouette, highly ornate outer layers, and elaborate headdresses. Their skirts were padded and had many pleats. Over this, they wore a bodice and embroidered gowns along with silk stockings.

6) Rich women usually wore gloves to show that they took care of their hands. Moreover wearing gloves showed that they did not do any manual work and hence showcased their social hierarchy. 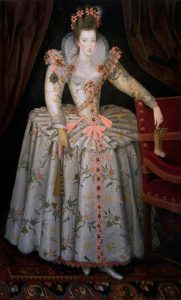 8) The influence of French fashion in Tudor courts

French fashion was very popular in Tudor courts and especially among women. The French gowns had an open square neckline which was considered appropriate if a woman wanted to show some skin.

9) Another aspect of Tudor fashion was that men and women both wore knee-high stockings which were held by garters. Additionally, the sleeves of the attire were removable for both.

10) Catherine of Aragon was quite a trendsetter, she started the fashion trend of wearing revealing blackwork embroidery, which was subsequently followed by the female Tudor nobles.

11) Catherine of Aragon also introduced the Spanish Farthingale, an undergarment that added a skirt volume.

12) A linen shift was worn by Tudor women of all classes as they could be washed and changed easily.

13) The duchesses and countesses wore elaborate gowns, kirtles, partlets (sleeveless garments) and ornate sleeves. Moreover, their clothes were usually made of sable fur.

14) During the sixteenth century, women started wearing linen caps under their headdresses which became a style over time.

15) The Tudor queens and their fashionable hoods

Catherine of Aragon wore the English hood which had a distinct triangular frame while the second wife of Henry VIII, Anne Boleyn popularised wearing a hood that had a softer shape. This hood was called the French hood. Henry VIII’s third wife, Jane Seymour reverted to wearing the English hood to disassociate from the political image of Anne Boleyn.

16) Tudor Monarchy wore clothes made of expensive material such as silk, satin and velvet. Additionally, they were the only ones allowed to wear the colours crimson, purple and gold.

17) The monarch Henry VIII was once titled as the ‘the best-dressed sovereign in the world’. He always dressed to the nines and showcased his wealth and status through his clothes.

18) The Queen, her mother and sisters were allowed to wear gowns, kirtles and partlets. The colour usually worn by them was purple, and the material of the clothing was silk.

19) Elizabeth I usually wore black or white clothing which represented her chastity and virginity.

20) The Tudor King, his mother and brethren usually wore silk as well. Moreover, they were allowed to wear any type of clothing.

21) The order of the clothing for women

The order in which the women wore the clothes was that the stockings and the shoes were worn first. After that, they wore the main item of underwear called a chemise. Following which they wore a petticoat and the farthingale. Then they wore the corset which flattened all lumps. After which, they put on the bum roll which gave the hips the extra flair. The partlet was worn over the corset and the kirtle was the main underskirt. Lastly, the gown was worn which split at the front to reveal the kirtle. The sleeves were either attached or sewed in.

Henry VIII saw sumptuary laws as an essential way to maintain the social hierarchy among the classes. He passed four ‘Acts of Apparel’ to ensure that the lower classes do not emulate the fashion of the Tudor court. Only the nobility and the upper class were allowed to dress in a certain way.

Previous articleR. Budd Dwyer- the man who killed himself on television
Next articleVasco Da Gama is the first European explorer to reach India. On his way, he came across a ship full of pilgrims on their way to Mecca. He looted them & locked in everyone in the ship & burned them alive. De Gama did this despite women holding up their babies & pleading for mercy.