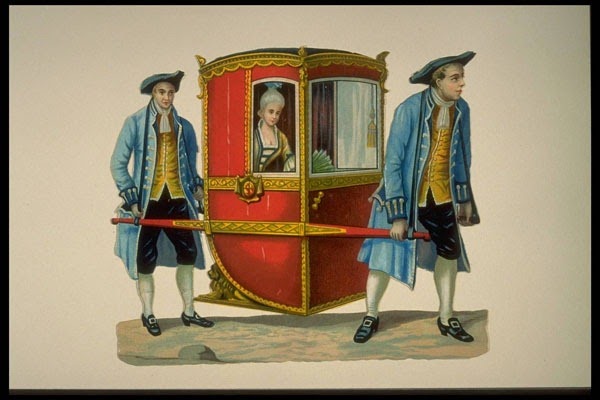 A Sedan chair is essentially a covered cabin that is carried on poles by two people. It was used in the past for transporting a passenger through the streets of the city. It was especially popular in England during the 17-18th century.

1) It is named after Sedan, a town in France where the chair was first used. The men who carried the chair were called ‘chairmen’ and the passengers would get in and out via a hinged door at the front of the chair. 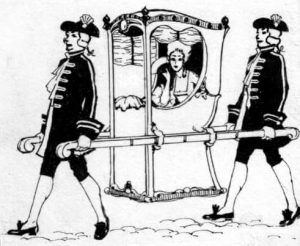 Additionally, when the Duke of Buckingham began to use one, he received great criticism from the people for making humans do the work of animals. However, as time passed the opinions changed and, in 1643 when Sir Saunders Duncombe introduced the chair in London it was an instant success. At the time the streets were clogged with carriages so the chair was a welcome change. Duncombe consequently acquired a 14-year licence to rent out his own hackney sedans or ‘hackney chairs’. 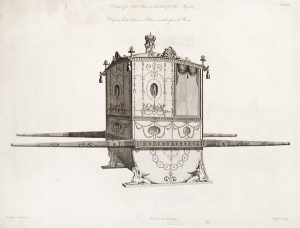 3) The attributes of the hackney chair

Each hackney chair had to be 5′ 3″ tall and 2′ 2″ wide. They were painted black, with the chair number in white; similar to modern-day taxis, the Sedan chairs had an identifying number plate which was painted on the front, back and top of the chair. The inside of the chair had a padded seating. Additionally, the chair had windows around three sides which enabled the traveller to see outside. These windows also had curtains which allowed privacy and anonymity if required. 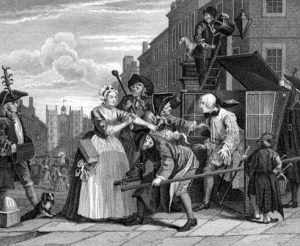 4) The transport was especially popular among the gentry. During the 17-18th century, the streets of London were filthy, so the Sedan chair was instrumental in keeping the people’s expensive clothes and shoes clean. Additionally, the chair had a detachable roof so it was also convenient for women wearing elaborate hats. 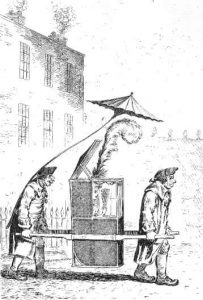 5) Sedan chairs were soon allowed to travel on the pavements which were previously reserved for the pedestrians. The pedestrians were expected to give a vocal warning to the approaching chairmen saying ‘Have a care!’ or ‘By your leave, sir!’. However, this wasn’t always the case and hence there were frequent accidents of the chair tipping over. 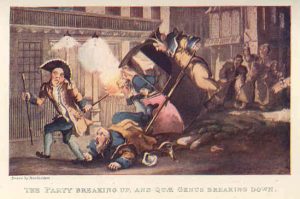 6) Subsequently, a law was put into place, like modern taxi stations, the Sedan chairs were supposed to have a separate station from where passengers could hire a chair. Additionally, the chairmen were expected to be licensed; a chairmen’s license cost 3 shillings per chair and the fine for running an unlicensed chair was 13s. Moreover, the chair and the name of the carriers(the ‘pair’) were recorded annually at the corporation.

7) The wealthy, however, did not use these stations. Instead, they sent their footmen out in the street to call for the chair by shouting ‘chair, chair!’. Moreover, some even kept their own chairs which were elaborately decorated with family crests or paintings. 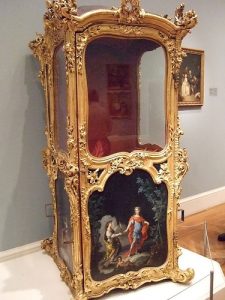 8) Additionally, the fares varied as well. According to a 1768 list of fares in Edinburgh, the fare for travelling within the city was 6d(2.5 pence), for a journey half a mile outside the city it was 1 shilling and 6d(7.5p), and it was 4 shillings(20p) for a whole day’s hire.

9) Sedan chairs were for hire around the clock, however, after midnight the fares doubled. In the dark, the chair was accompanied by ‘link boys’ or torchbearers who would lead the way. 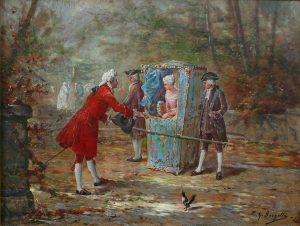 10) Sedan chairs in the city of Bath

During the 18th century, Bath had a serious traffic problem with pedestrians, horses and carriages competing for space in the narrow and congested streets. Hence the Sedan chair was the optimum mode of transportation. The Sedan chairs in Bath were slightly different from the regular ones, they were lighter and their poles were shorter as well. However, this was beneficial for the sick and invalid. In fact, Mineral Water Hospital even had their personalised chairs. Additionally, people were picked from their beds and conveyed to take in the waters of Bath. Once they were done they were brought back by the same chairmen. These chairs even had a curtain which prevented any draft of air from seeping in. Furthermore, the doors of the bathhouses were designed in such a way that they could easily fit in the Sedan chair, so the passenger wouldn’t have to step outside.

11) There were no fixed requirements for being a chairman. The men simply had to be fit, strong and healthy. Additionally, most of the chairmen were from the Highlands of Scotland. 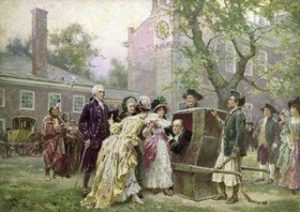 12) The chairmen had a distinctive uniform which varied during the winters and the summers. The uniform consisted of a blue tunic or coat, black knee-breeches, white stockings and buckled shoes which were paired with a large cocked hat. 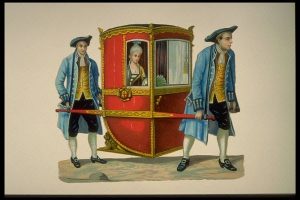 13) The chairmen of the Georgian era were prone to profanities and as a result, swearing was a common misdemeanour. This offence incurred fines ranging from one to ten-shilling. However, serious offences such as assaults brought suspension or discharge.

14) Additionally, the chairmen often amused themselves while waiting for a fare. Many kept dogs for company and many indulged in drinking and gambling.

15) Despite the Sedan chair’s popularity, it gradually fell into disuse towards the 19th century. Mainly because the streets became better paved and due to the more comfortable upcoming modes of transportation.

Enjoyed the above article? You may also enjoy 15 Interesting Facts About Saddle Shoes

Previous article11 Famous scary paintings that will give you nightmares!
Next article10 most famous portrait paintings in art history