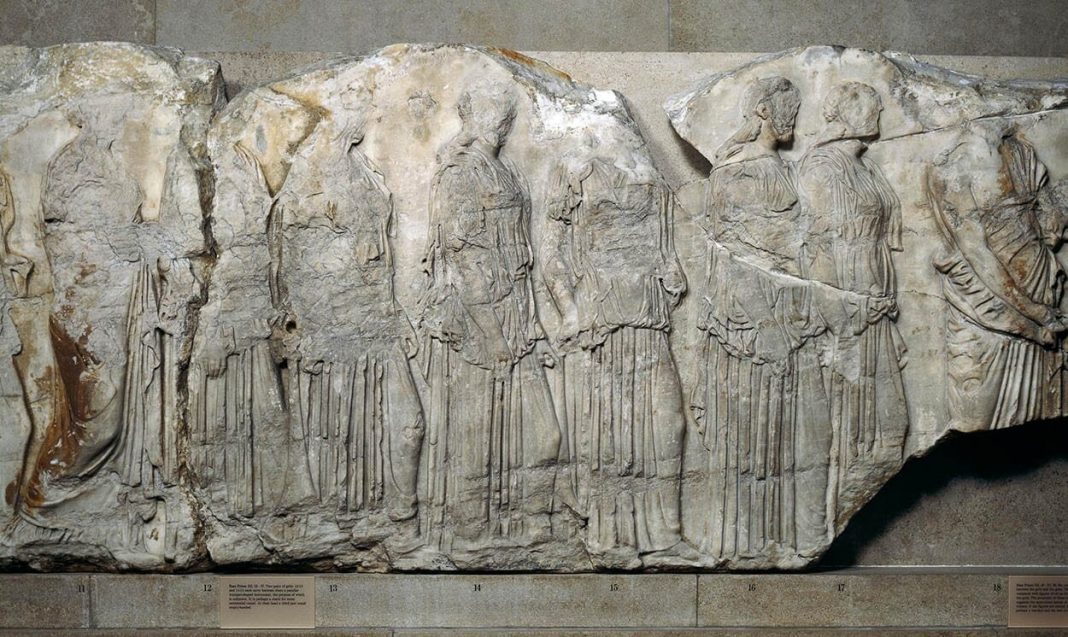 The Parthenon frieze is a marble sculpture that adorned the upper part of the Parthenon temple. It was constructed between c. 443 and 437 BC, most likely under the supervision of the Greek sculptor, Pheidias. The original frieze measures 160 meters in length but only about 80% of it survives today. The rest 20% was destroyed during the Venetian bombardments. Today, a majority of the sculpture is displayed at the British Museum and another major part is displayed at the Acropolis Museum. While other parts of the frieze are displayed at various other museums. In the below text we have compiled the history, interpretations and facts about the Parthenon frieze.

1) The frieze was sculpted in the Parthenon which was a former temple on Greece’s Athenian Acropolis. It is made up of Pentelic marble which was quarried from Mount Pentelicus.

The Parthenon frieze essentially depicts a Panathenaic procession. Many Greek historians and scholars believe that this procession was a part of the national festival called the Panathenaic, which commemorated the birth of the Greek goddess Athena. However, many experts hold the belief that the procession is part of the Panathenaic Games, which preceded the Battle of Marathon.

3) The frieze depicts Athenian citizens forming a long procession made up of more than 300 human and animal figures. All are walking towards the pantheon of seated Greek gods. Additionally, the frieze was once painted with vibrant colours contrasting to their now monochrome.

4) The procession begins at the southwest end of the building because that would have been the first thing an individual approached once he walked up to the acropolis. It is then divided into two files.

5) The north, west and south side of the Parthenon frieze

The north, west and south of the Parthenon frieze encompass marshalls, horsemen, musicians and sacrificial animals. In fact, almost 46% of the whole frieze consists of equestrians. The beginning depicts a mix of equestrians, horses and marshalls; however, the riders on the south and north sides are divided into ranks. On the south, there are 10 such groups while the north side has a greater number, presumably 12. These riders are then led by groups of chariots again 10 on the south and presumably 12 on the north. Many are seen taking part in a apobates’ race.

Groups of men carrying objects lead the charioteers; the north side depicts men carrying musical instruments, trays and water jars, and this group is led by attendants and sacrificial animals. The south side represents the same but the men vary in numbers and are carrying slightly different objects; tablets(or lyres) instead of musical instruments.

6) The east side of the Parthenon frieze

The east side of the frieze depicts both a continuation of the procession and its culmination. It consists of groups of women, 16 from the south side and 13 from the north. They are accompanied by several men. These women are often interpreted as the priestesses for the sacrifice and sometimes as the Ergastinai(weavers) who wove the peplos. The next group consists of 10 men(6 on the south and 4 on the north) who are often interpreted as the eponymous heroes of the 10 Attic tribes. But a new interpretation suggests they are the athlothetai.

Next are a group of 12 seated figures, represented as Greek deities. They are seated on stools except for Zeus who is enthroned. Their backs are somewhat turned towards the culminating ritual. Finally, the main focus of the frieze is at the centre of the front porch of the cellar where a small ritual is taking place. There are 5 figures present (2 adults and 3 children). The older man, said to be the archon basileus is assisted by a child in folding a piece of cloth; while 2 girls presumably the Arrhephoroi are standing to the left. Hence the ritual is said to represent the ritual exchange of Athena’s peplos.

7) The Parthenon frieze thus envisages a parade that has been divided and moves around both sides of the building, intersecting towards the east end where it will meet for the culminating ritual. 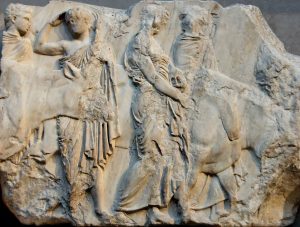 8) The interpretation of the Parthenon frieze

It is often under debate whether the frieze is a historic, mythical or symbolic event. According to John Boardman, the author of the “Parthenon frieze”, 1984, there are many inconsistencies to say it’s a historic event, but he agrees that the basic premise of the frieze is a Panathenaic procession. He further stated that

“The festival was that which just preceded Marathon, and that the procession was dominated by those who were to fight and fall at Marathon, their heroic status indicated by their activity, with horses and chariots, and by their reception by the Eponymous Heroes and Twelve Gods, given the close associations demonstrable between Marathon, the Panathenaea, and the building of the Parthenon.”

This is a widely accepted view. However, in contrast, Tom Stevenson argues in his article “The Parthenon Frieze in Recent Scholarship: Problems and Interpretations” that the frieze represents the festival of the Great Panathenaia as a whole. Another interpreter, Joan Connelly says it is a mythological event; the sacrifice of the Erechtheids. And similarly, J.J. Pollitt says the frieze represents a mythologised history. Thus there have been many such different interpretations surrounding the frieze. 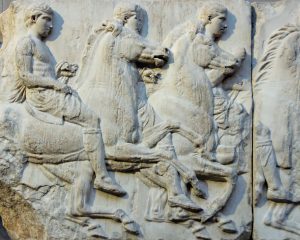 10) One of its many inconsistencies is that it doesn’t show the hoplite soldiers, the citizen army of Athens, as they were the ones most killed during the Battle of Marathon. But then as argued by Boardman it may have been because the artist might have wanted to represent the higher military i.e the equestrians and the charioteers.

11)  In conclusion, unless there is written documentation, the exact interpretation of the Parthenon frieze is difficult. For now, we just have the various theories and interpretations of scholars and historians to help us understand the marble sculpture better.

Enjoyed the above article? You may also enjoy 10 things dubbed as ‘The Eighth Wonder of the World’