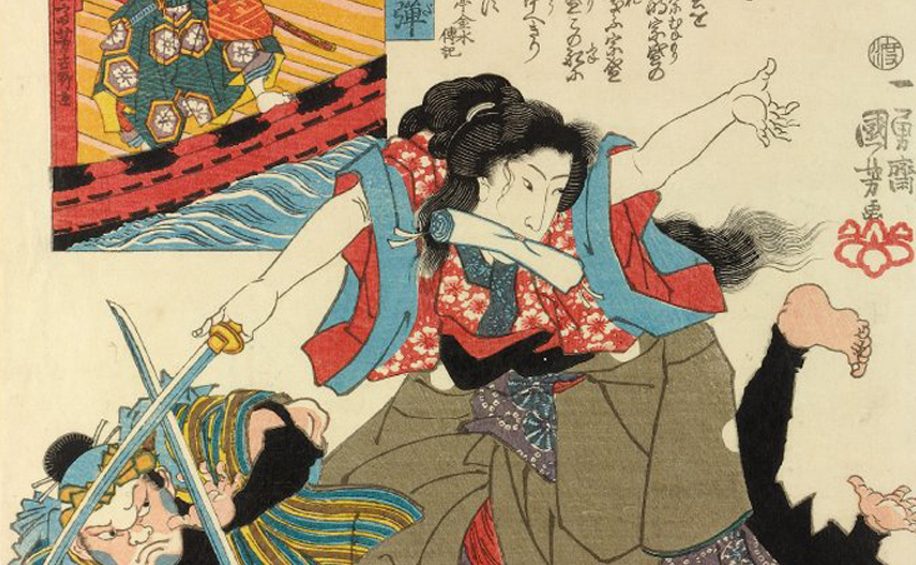 Most of us think of samurai at the mention of Japan. However, we’re going to be talking about their female counterpart who proved just as powerful and sometimes even more. “Onna-bugeisha” is the Japanese word for “female martial artist.” However, unlike regular martial artists, they didn’t limit themselves to just hand fighting. These women trained and practised both martial arts and fighting with weapons. Primarily using bows and arrows, an Onna-bugeisha would strive to protect her home, clan, or honour during times of trouble. For several years of Japanese history, the onna-bugeisha fought alongside male samurai when the situation demanded so.

The onna-bugeisha were jills of all trades. Apart from warfare, they were trained in science, literature and mathematics too.

Here are 8 facts about the inspirational Onna-bugeisha, Japan’s female warriors.

1. The Onna-bugeisha came into existence way before the Samurai

The samurai rose only in the 12th century; however, the Onna-bugeisha trained themselves several centuries before. It was so that they could fight those who attempted to raid their villages, even if the men were absent.

2. Empress Jingū, one of the first Onna-bugeisha, is said to have fought when she was pregnant

According to ancient Japanese texts, Empress Jingū was one of the first Onna-bugeisha. Although she took over the throne after the death of her husband, Empress Jingū proved to be an efficient ruler. She is famous for the successful conquest of the Korean peninsula. According to a legend, Empress Jingū led the expedition without losing a drop of blood, after which she continued to rule Japan for the next 70 years till she turned 100.

However, her achievement leans towards a controversial side, as many historians argue that she may have never even existed as Korean history doesn’t mention the conquest. They claim that Empress Jingū may be more of a legend than a real historical figure. She is nevertheless said to have been pregnant when she fought, donning men’s clothes. In 1881, Empress Jingū was the first woman to appear on a Japanese banknote.

Along with archery and other techniques, the onna-bugeisha used a weapon made specifically for women, called the naginata. It was a conventional yet versatile polearm with a curved blade at its tip. Given the women’s smaller size, the naginata’s length gave them a better balance. This cross between a spear and sword worked well and not just helped while fighting on horseback but also kept enemies at bay.

During the Edo period, the naginata depicted a higher status and was often part of the dowry given along with the nobility’s bride. During the Meiji era, however, women used it as a martial art weapon. Soon, many schools began implementing it in their curriculum as well.

4. Tomoe Gozen was one of the most successful onna-bugeisha and kept her enemy’s decapitated head as a trophy

Tomoe Gozen gained popularity during the Genpei War between the Minamoto and Taira dynasties. Her expertise included horseback riding, archery and katana, a weapon used by the samurai. Gozen was one of those few female warriors to engage in onna-musha or offensive battles. ‘The Tale of Heike,’ of the 14th century, described Gozen as

“a remarkably strong archer, and as a swordswoman, she was a warrior worth a thousand, ready to confront a demon or a god, mounted or on foot.”

She was among the five warriors who survived out of 3200 in a battle held in 1184. She defeated the Musashi clan leader during the Battle of Awazu, decapitated his head and kept it as a trophy. Her troops trusted her deeply and Gorzen’s leader, Lord Kiso no Yoshinaka, considered her as Japan’s first real general. Her enemies both feared and adored her at the same time. They deeply admired her for her war prowess and bravery. It is said that even when she was imprisoned, several of the men she had fought against, wished to marry her!

Like Empress Jingū, several historians doubt the existence of Tomoe Gozen. However, there is no doubt that she had a lasting impact on subsequent Japanese history. Very often, art portrays her as an inspiration for young women. In fact, according to a historical book, Gozen founded a school to teach women fighting skills.

After her husband, the first shōgun of the Kamakura period’s death, Hōjō Masako, led a Buddhist nun’s life as per the social norm. However, she continued to be involved in politics. Her sons, Minamoto no Yoriie and Minamoto no Sanetomo, became the second and third shōgun. Masoka played a critical role in shaping their careers. Under her influence, women gained a higher power in society and rights like the equal inheritance of fraternal kin and control over finances.

Apart from naginata, the onna-bugeisha trained in the art of Tantojutsu as well. It involved fighting with a dagger known as tanto and later referred to as kaiken. Although it was mainly learnt for self-defence, the onna-bugeisha incorporated it into battles too. In fact, several people in Japan and worldwide still practise Tantojutsu.

Nakano Takeko was an onna-bugeisha who fought and died during the Boshin war. Legend has it that she killed 172 samurai at the time of her death. She fought with the iconic naginata and led a corps of female combats who fought the war independently.

However, her demise marked the end of onna-bugeisha in Japanese society. Society changed irrevocably and their numbers fell.

Now that you’ve read about Japan’s female warriors, check out some badass women pirates who broke all stereotypes and took to the high seas!