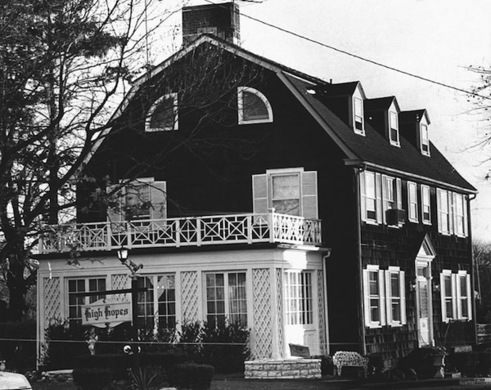 The very mention of 112 Ocean Avenue in Amityville, Long Island, would give anybody chills. You may be familiar with the demonic pig and swarming flies; keep scrolling for weirder facts about the “Amityville House” that Hollywood didn’t tell you.

The story goes that on November 13, 1974, Ronald DeFeo Jr., using a Marlin rifle, methodically walked into each bedroom in his house, killing everyone as he went. His parents, two brothers, and two sisters were all found in the exact same position: laying on their stomachs in their beds. DeFeo claimed that voices told him to kill his family, though he changed his story many times over. He is currently serving six consecutive life sentences.

1. The DeFoes were all found dead in the same position

Television actress Christine Belford stayed in the Amityville Horror house for five years. After this, her parents sold it to the DeFoes. The couple at the Amityville house, Ronald DeFeo, Sr. and Louise DeFeo were shot twice with a Marlin 336C rifle of .35 caliber. But the four kids – Allison, Dawn, John and Marc Matthew were shot once. It is estimated the entire massacre finished in fifteen minutes. The cops found all six of them lying on beds with their stomachs down. What is creepier is that the neighbors didn’t hear gunshots and it didn’t look like he family members heard them either.

The fact that all the victims’ bodies looked identically positioned suggests that the killer might have deliberately aligned that way.

2. The DeFoes’ furniture was present at the home when the Lutzes moved in

According to the first chapter in a book written by Anson, the furniture came with the home when the Lutzes bought it. Apart from the 80,000 dollars offer, they paid a price of 400 dollars. As per some reports, the furniture exists precisely where they were on the night of the murders.

At first, Ronald DeFeo, Jr, reported the mass murder to the cops himself. He said that after arriving home from work on November 13th, he discovered that someone murdered his parents and two brothers and sisters. He even claimed that Louis Falini, a mafia, may have carried out the killing.

However, after investigations revealed that the murder happened in the morning, DeFeo said that Falini held him at gunpoint and forced him to watch his family’s killing. Soon, after a lot of scrutinies, Defeo confessed, saying, “Once I started, I just couldn’t stop. It went so fast.”

During his 1975 trial, DeFeo said the “voices” made him commit the murders. Moreover, a psychiatrist in his defence diagnosed DeFeo with dissociative disorder. In which case, he must have seen the murder happen “outside of his body” and not as he was committing them himself. However, the prosecution psychiatrist claimed that he had an anti-social personality disorder. This means he must know perfectly what he did but showed no regard for right and wrong. DeFeo was charged guilty for the murders at the Amityville house and got sentenced to six life sentences.

Once again, in 1986, the story changed. In an interview, DeFeo claimed that his sister Dawn shot their father. Their mother then murdered Dawn and the rest of the children. She then shot herself. However, in 1990 when DeFeo filed a 440 motion, he said that he shot Dawn after she murdered most of his family.

4. The Lutzes lasted at the Amityville house for less than a month

They stayed there for only 28 days. George, Kathleen, the three children and their dog left home on January 14th, 1976. After one night that scared the kids, the Lutzes’ priest advised them to stay elsewhere the next night. Initially, they went to Kathleen’s mother’s home but never came back.

In 1977, the Lutzes published a book named “The Amityville Horror” talking about their terrors during their stay. They sold 10 million copies till today. In 1979, a movie was made inspired by the book. It starred James Brolin and Margot Kidder. Filmmakers made several other movies based on Amityville.

However, many experts did not buy the Lutzes story. In fact, their lawyer said that same – “We created this horror story over many bottles of wine… It is a hoax.” Daniel and Lutz, two of the children, claimed that he experienced a supernatural phenomenon. However, they said that most of the book’s events are fictional and that their stepfather George was to blame. The owners after Lutzes bought the house for $55,000 and did not experience any strange happenings.

If you google “demonic boy,” a popular image shows up. It was taken by paranormal investigators Ed and Lorraine Warren(the one’s from Conjuring) after the Lutzes left Amityville. In the photo, a boy with glowing eyes is seen peeping into the frame. Some believe that it was the spirit of John Matthew DeFeo, who was just nine when murdered.

6. There could have been a second murderer the Amityville House who never was caught

We don’t know this for sure, but according to the police at the time, there may be a second killer. It was the only way one could explain some of the mind-boggling aspects of the crime scene. Although it isn’t proved that a second murderer exists, in 2012, a documentary filmmaker claimed that he had the evidence to prove the same.

7. What the crew of The Amityville Horror remake said

The DeFeo family killings took place at 3:15 am. Weirdly, several crew members of The Amityville Horror remake began waking up at the same time, as well, including Melissa George and Ryan Reynolds.

The house is no longer called 112 Ocean Avenue and is 108 now. Even though the exterior of the house has been refurbished, several tourists still visit it. No one really knows for sure as to what happened that ill-fated day. Whether haunting or not, it certainly was one of the most gruesome murders.

If this article wasn’t weird enough for you, check out some bizarre deaths from the past!