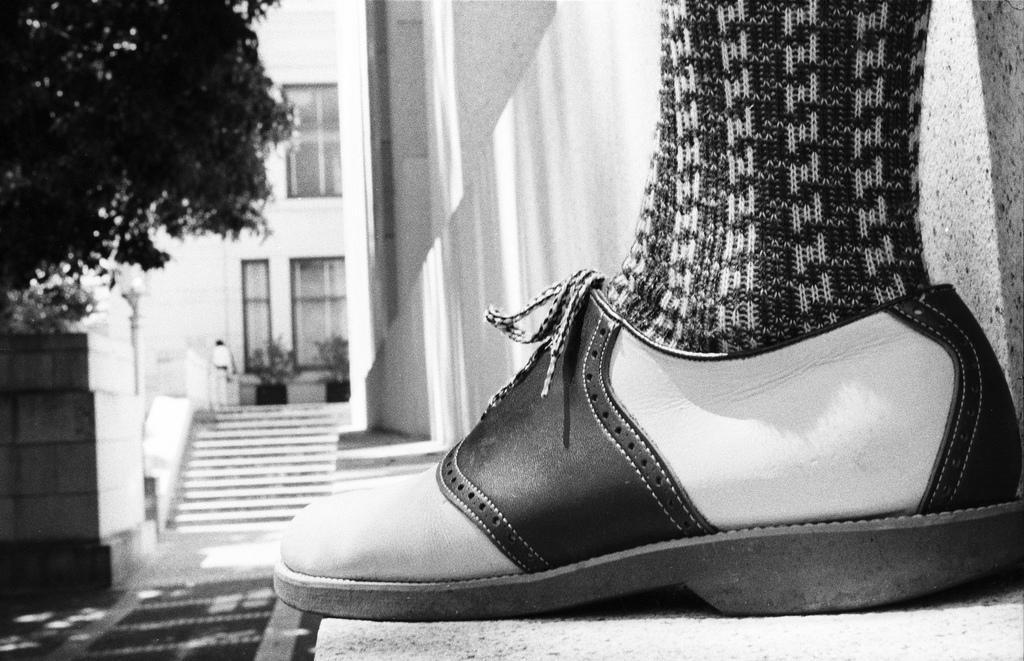 Even if you don’t know what saddle shoes are, you are sure to recognise them if you look below. These shoes can pretty much be placed under a list of some of the most fashionable pieces ever created. Keep reading to know some interesting facts about saddle shoes and how they were a staple part of every family member’s closet.

1) The fact that saddle shoes were born in the 1800s is proof that man always had a great sense of fashion!

For the last 150 years, saddle shoes have been trendy among men’s footwear. They are famous for their classic style that goes well with both formal and casual looks. Although they were born back in the late 1800s, they are just as famous today.

2) You wouldn’t be able to overlook them

Saddle shoes catch the eye quickly because of their bold pattern and colour. The traditional saddle has a low oxford heel made of white leather. The style is defined by a leather piece of contrast colour and stitched across the shoe’s instep, usually black.

3) Did you know that saddle shoes were initially made for indoor sports?

The first recorded saddle shoes were worn around 1906. They were initially meant for indoor sports as the shoes gave support for strenuous activity. So, the style was trendy among golfers. Even today several golfers swear by them because they offer great support on a field of 18 holes. As they work great without sacrificing on style, they are known to be the perfect aesthetic pick for golf courses.

4) Only men wore bucks, but these shoes looked great on both girls and boys

Although only men wore bucks, saddle shoes were used by both genders, especially during the 20s and 50s.

5) Back in the day, the “cool” kids wore saddle shoes

6) They made quite a progress from indoor sports to hip hop. Essentially they were also used by several hip hop styles like Jitterbug and Lindy Hop.

7) What if you could have saddle shoes of your favourite colour?

Initially, the saddle shoes were known for its classic black and white combination. Later on, brands began playing with other colourful additions like blue, pink and yellow saddles. Hence, thanks to the endless design possibilities, they survived the test of time. Today, regardless of aesthetic or budget, anyone could find themselves a pair of these shoes.

8) Depression off, saddles shoes on!

As the 1930s came to an end, so did the depression period. Earlier, manufacturers had stopped the production of saddle shoes, but now they began once again. Once again, customers could afford them and more and more designs started showing up. Until then, most of the men’s wear showed women’s colour combinations. However, as time passed, they turned up in darker tones like dark brown, black on grey, blue on black and black on black. In fact, these were just a few of the options; there were several more.

9) Pop culture is incomplete without these shoes

During the 1940s, pop culture equalled saddle shoes. Men paired two-toned shoes with business attire. Women, too, paired them with suits and dresses. What started as just indoor sportswear had become one of the most fashionable items.

However, it was the female teenagers who made saddle shoes exclusive. Although they wore them when they were younger, teen girls still used them later. They found them to be much more youthful than its counterparts like wedges and peep toes.

An interesting fact about saddle shoes is that the teenagers of the 1940s began the trend of wearing saddle shoes and bobby socks together. They almost always wore black and white shoes with black or natural rubber soles. Soon, the dirty shoes’ trend declines, and the new craze was for rubber soles that were red and spotless. They sparkled their shoes so much and almost looked new. Did you know that girls would clean and polish their shoes every hour, so they looked perfect?

You could see most girls and boys in Junior High wearing saddle shoes. Girls looked stunning when they paired the shoes with poodle skirts. They would even wear them with blue denim jeans during summers and weekends. The teens who wore these were called “Booby – soxers.” They paired these shoes and white socks. Bobbysocks was a great way to masculine footwear like saddle shoes and brogues. These socks usually came till the ankle and were white with a lace on top that folded over. Sometimes they also came up with a cute ribbon bow and other elements that decorated the plain shoe. However, these socks had to be folded precisely on both sides to ensure symmetry.

Not just young girls and boys, homemakers also loved saddle shoes. They were extremely comfortable to wear around the house. However, they were a little too informal to be “proper.” So, wives would quickly change into their fancy heels just before their husbands got home. It is funny how women performed this ritual secretly for years. However, their beloved husbands didn’t have one clue about it.

Another interesting fact about the saddle shoes is that they evolved more and more as the 1950s moved on. As you read before, the 20s and 30s saw saddle straps on Oxfords—however, the 50s witness saddle straps on loafers, flats and even pumps. Saddle straps could be found in every nook and corner and they existed in almost every material and colour. From suede to patent leather to green, red and pink- saddle shoes checked them all. They soon became the staple style icon of the 1950s. We aren’t surprised, how could saddle shoes not be on top when almost every child, woman and man wore it?

All things good come to an end, rather a decline. The 1960s saw the fall of saddle shoes among adults when compared to the previous decades. Why did this happen? The credit goes to the rebellion against old school styles and values. Weirdly, they loved the tone colour blocking on clothes but not on shoes. Hence, the trend began to die as it was considered too old and childlike for grown adults.

However, today, these shoes are considered one of the most fashionable pieces ever created and they bring a smile to the face whenever one comes across them.