Reinhard Heydrich was the co-orchestrator of the holocaust. An event that killed around 6 million Jews and other victims. His brutal enforcement of laws and ruthless nature earned him the nickname ‘the butcher of Prague’.

Here are 27 facts about Reinhard Heydrich- The notorious butcher of Prague.

1) Rumours about his Jewish ancestry.

Reinhard was suspected of Jewish ancestry. This earned him the nickname ‘Moses Handel’.

2) His father was an opera singer and his mother played the piano, hence music ran in his blood. Growing up in a musical environment, he developed an interest in the violin, a passion which he continued throughout his adulthood.

3) He joined a Paramilitary troop at the age of 15 which was his political awakening.

After the end of World War I there was a lot of civil unrest at Heydrich’s hometown Halle. The defence minister then formed the  Maercker’s Volunteer Rifles, a paramilitary troop. Heydrich joined this group at the age of 15, awakening him politically. Subsequently, he joined the antisemitic organisation German Nationalist Protection and Defiance Federation.

4) He was notorious for having many affairs. One even got him fired!

During his naval career, Reinhard had numerous affairs. One of his affairs got him in deep trouble. He had an affair with the shipyard director’s daughter but refused to marry her. Subsequently, he got charged with unbecoming conduct of an officer and breach of promise, he was then dismissed from the navy. It was then that he met his wife Lina.

5) He joined the Nazi party after leaving the Navy.

6) In 1931, Heydrich became the chief of the intelligence service. During this time he established an office at the brown house. He had an extensive network of spies. Additionally, he stored information on thousands of people at the house.

7) In 1932, Heinrich Himmler appointed him as the chief of the intelligence agency of the SS called Sicherheitsdienst (SD). He was infamous for using terror and intimidation tactics.

8) In 1934, Heydrich became the chief of the Gestapo, the secret police of Nazi Germany.

9) Reinhard Heydrich was a perpetrator of the ‘Night of the Long Knives’, a purge against the Sturmabteilung (SA). A purge that killed around 200 people.

10) The Gestapo becomes a feared organisation.

With the SA out of the way, Heydrich made the Gestapo an instrument of fear. He began to incarcerate people if they were suspected of crimes. The Gestapo law of 1936 was in his favour as it gave the police the right to act lawlessly. The courts had no say in the imprisonment of people. As a result, people were arrested randomly and were sent to concentration camps or killed.

11) After the unification of the police forces in 1936, Himmler and Heydrich became the two most powerful men in Germany.

12) Heydrich subsequently organised the 1936 Berlin Olympics, as a part of Nazi propaganda.

According to this order, people suspected of endangering Germany’s security were to be arrested with maximum discretion. The SD had to fill out a form stating the prisoner’s name, country of origin and their crimes against the Reich. In this way, people would vanish without a trace.

14) Creation of the Zentralstelle IIP Polen- A Polish cleansing unit.

Heydrich created a Polish cleaning unit in the Gestapohe, the Zentralstelle IIP Polen. A unit for the extermination of Polish people during the German invasion of Poland.

15) In 1941, Heydrich became the Deputy Reich Protector of Bohemia and Moravia (annexed territory of Nazi Germany). Once in charge, he announced that he will Germanize the Czechs.

As Deputy Reich, he terrorised the population of Prague, he imposed martial law. After its implementation 142 people were executed within the first five days. By 1942 at least 5000 people were arrested and 500 were executed. Unarrested people were sent to the Mauthausen nazi concentration camp. These ruthless acts of his earned him the nickname ‘the butcher of Prague‘. 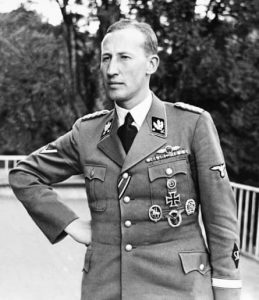 17) Reinhard Heydrich was essentially the military dictator of Bohemia and Moravia. He was so confident and unafraid of the people that he often drove around with an open roof car.

As one of the most feared members of the Nazi Party, Hitler gave Heydrich the apt nickname ‘the man with the iron heart’.

19) He organised the horrific ‘Kristallnacht’.

Kristallnacht is also called ‘Night of the Broken Glass’. It was a pogrom against the Jews.  The name comes from the shards of glass found outside the broken windows of Jewish buildings. On this night over 30,000 Jewish men were arrested and thrown into concentration camps. Additionally, paramilitary forces ransacked and destroyed Jewish homes, hospitals, schools and buildings with sledgehammers. This event has said to be the introduction to the holocaust.

20) Heydrich was the mastermind behind the invasion of Poland.

Hitler wanted a reason to invade Poland. Heydrich, Himmler and Heinrich Müller came up with a solution called the Operation Himmler. The plan was to show Polish hostility against Germany. It involved a fake attack on a German radio station. According to the plan, several Germans disguised as Polish troops attacked the station and sent out an anti-German message in Polish. This gave Hitler a motive to invade Poland.

22) Heydrich is responsible for the forced movement of 60,000 Jews in Germany and Czechoslovakia to the Nazi ghettos in Poland.

24) The assassination of Reinhard Heydrich- The butcher of Prague.

The Czechoslovak-government-in-exile made plans to assassinate Heydrich. They set a plan in motion for 27 May 1942. Heydrich was on his way to meet Hitler. To do so he was supposed to pass through the Dresden-Prague road; a road which merges to the Troja bridge.

On this road, drivers had to slow down on the bend. A suitable place for an assassination. Two Czechoslovak SOE agents then attempted to kill Heydrich, however, their plan failed and he managed to survive.

However, Heydrich sustained major injuries due to the attack and passed away in the following weeks.

Hitler privately called Heydrich stupid for his carelessness. He condemned him for his careless behaviour of driving down the streets in open cars and unarmored vehicles. Hitler stated that in the end, Heydrich was responsible for his own death.

26) The brutal aftermath of his death.

Hitler was furious at the Czech people. After an investigation, intelligence agencies erroneously linked the assailants to the towns of Lidice and Ležáky. Hitler subsequently ordered radical reprisals by killing all the males over the age of 16 in the villages and sending the women to concentration camps.

Moreover, both the towns were burned down and Lidice was completely levelled. During these brutal reprisals, 1,300 Czechs were murdered.