Let us take a look at the Peloponnesian War- A Conflict That Reshaped Ancient Greece.

1) The cause of the Peloponnesian War

The Peloponnesian War essentially started after the end of the Persian Wars in 449 B.C. In order to defeat the Persians, the Greeks had utilised the combined leadership of Athens and Sparta. However, after Greece’s victory, the two sides were unable to maintain their unity and ultimately the differences between the two drove Ancient Greece apart. The Greeks had divided loyalties. Hence as soon as the Persians left, the Greeks started having internal conflicts.

The Athenians subsequently formed the Delian League. The League was essentially an alliance of city-states and islands that vowed to continue the war against the Persians until they no longer posed a threat to their alliance. Eventually, the Athenians gained dominance of the Delian League. And this constituted the Golden Age of Athens. 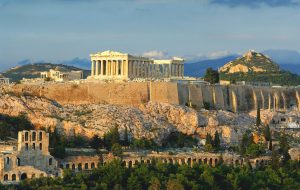 The Great Peloponnesian War was the first major conflict between Athens and Sparta and their allies. The scuffle lasted for 15 years and subsequently, the signing of the Thirty Years’ Peace Treaty in 445 B.C. ended the war. 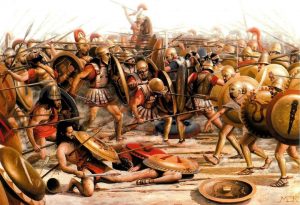 3) However, due to various conflicts, the Thirty Years’ Peace Treaty became strained

In 440 B.C., one of Sparta’s allies Corinth urged the Spartans to declare war on Athens simultaneously as Corinth was suppressing a revolt on the island of Samos. However, at the time Sparta refused to engage in battle. But ultimately battle between the two was inevitable.

4) The ancient city Epidamnus was facing domestic issues which led to Corinth’s involvement. However, Corinth’s enemy Corcyra targeted Epidamnus and seized it in a naval battle. Although Corinth retreated, it began rebuilding its fleet and planning its revenge. 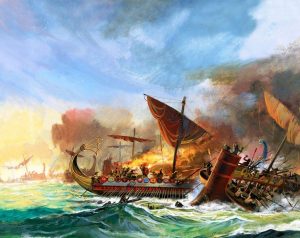 5) Renewed hostilities began in 433 B.C. when Athens allied itself with Corcyra

As tensions began to build, Corcyra officially sought help from Athens. Although Athens initially debated the idea, their most influential leader Pericles suggested a defensive alliance with Corcyra. Subsequently, fighting ensued, and the Athenians then proceeded to violate the Thirty Years’ Peace Treaty.

6) The Battle of Sybota was a naval battle between Greek city-states Corcyra and Corinth and it became an immediate catalyst for the Peloponnesian War.

7) Eventually, Sparta was drawn into the conflict. They were hesitant to enter war directly but were convinced by Corinth to do so. However, before they took action, they sent three delegations to Athens to avoid war, however, they all failed. Ultimately, in 431 B.C., a Spartan ally, Thebes attacked an Athenian ally Plataea and open war ensued. 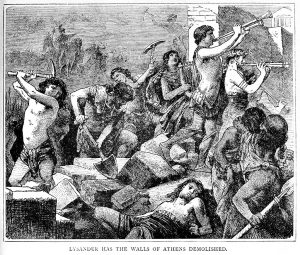 The subsequent years of fighting are divided into two periods; the first 10 years being the “Archidamian War”. During that time, the Spartan King Archidamus II led an army into Attica, the region around Athens. The Spartans aimed to liberate the states under Athenian rule by decimating their defences and tearing down their structure.

As the Spartans surrounded Athens in a siege, Pericles declined to fight them near the city’s walls and instead urged the Athenians to make full use of their naval superiority. When Pericles returned from his naval campaigns in 430 B.C., a plague had ravaged the city, killing nearly two-thirds of the population. Ultimately he himself fell victim to the plague and succumbed. This was a huge set back for the Athenians. Simultaneously, the Spartans also suffered some major losses at sea.

After many years of open warfare, Sparta extended an olive branch which Athens accepted. In 423 B.C., both sides signed an agreement of peace stating that Athens and Sparta would defend each other for the next 50 years. However, the treaty barely lasted 8 years.

The second phase of the Peloponnesian War began when the Athenians decided to help their allies in Sicily against Syracuse invaders. They launched a huge attack on Syracuse, resulting in retaliation from the Spartans. Thus the hostilities renewed between the two.

11) Who won the Peloponnesian War?

Learning from its past conflict, the Spartans established a fleet of warships to beat the Athenian navy. However, it would be another decade of fighting before the Spartan general Lysander defeated the Athenian armada at Aegospotami. This devastating defeat led to the Athenian surrender and consequently ended the Peloponnesian War.

12) Consequences of the Peloponnesian War

The main consequence of the Peloponnesian War was the fall of Athens. With that, it signalled the end of the Golden Age of Ancient Greece. Sparta eventually took over the Athenian empire. Additionally, for some time Athens was ruled by tyrants until it became a democracy again. Although Athens was considerably weakened, it played an active role in Greek politics. The rivalry between the two finally concluded when both were conquered less than a century later and made part of the kingdom of Macedon.

Enjoyed the above article? You may also enjoy 20 Interesting Facts About Ancient Greece.