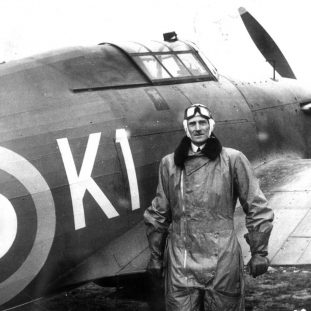 Many clothes considered trendy today like the trench coats, bomber jackets, chino pants, and aviator glasses all originate from WWII military clothing. Of course, back then, these weren’t a fashion statement and were introduced because it was a necessity. The soldiers and military officers needed battle efficient clothes. Hence military fashion during World War II saw a lot of comfortable yet stylish fashion trends comings in.

1) Below pictured is 19-year-old Soviet sniper Roza Shanina. In the below picture, she dons the camouflage smock.

2) Trench coats were in vogue. Moreover, they were an integral part of military fashion during World War II. Below pictured is King Leopold III of Belgium donning the trench coat.

3) A girl pictured wearing the Schutzstaffel(SS) uniform. The SS were a paramilitary group which was responsible for many atrocities during Hitler‘s rule.

5) Bomber jackets or flight jackets were an integral part of military fashion during World War II. Richard Byrd is wearing the sheepskin flight jacket, which kept the pilots warm in the aircraft.

6) Below is the Eisenhower jacket, which was developed by the U.S. Army towards the end of the war. The British Battledress inspired the design for this jacket.

7) Military personnel often got creative with their clothes. Below pictured is a creative design on a bomber jacket.

8) The below picture depicts the Women’s Army Corps(WAC) wearing the female service dress. The women are wearing the Olive Drab 33 shade. The women’s military fashion during World War II went through many changes.

9) Who isn’t familiar with the famed combat boots? Modern combat boots were introduced by the U.S. Army during World War II and were a part of the M-1943 Uniform Ensemble. They were officially called ‘Boots, Combat Service’.

10) Summer uniforms for the male officers were made out of cotton khaki and were similar to those of enlisted men. The only difference being that the shirt had shoulder straps added in. Pictured is Audie Murphy, an American soldier, wearing the U.S. Army summer service khaki uniform.

12) The Type A-2 leather flight jacket or the ‘jacket, pilots'(summer)’ is an American military flight jacket that was a popular military fashion piece during World War II.

14) Air Chief Marshal Keith Park helped secure victory in the Battle of Britain and the Battle of Malta. Here he is wearing a flight suit.

15) A woman pictured wearing a floater coat. These coats could provide floatation for up to 3 days.

19) Below pictured is the Military Fashion during World War II for the U.S. Navy Nurse Corps.

20) Below pictured are military personnel wearing the British Battledress a.k.a the No.5 Uniform. The British Commonwealth and Imperial forces and many Free European Forces wore it during the Second World War.

Enjoyed the above article? You may also enjoy 15 Iconic pictures from the 1939 New York World’s Fair