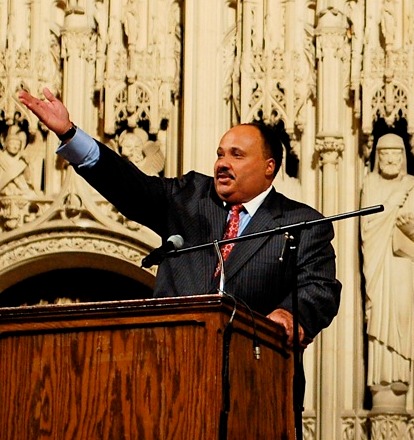 1) He was born on 23 October 1957. His mother did not want to name him after his well-known father. However, Martin Luther King Jr. always wanted to give his son the name Martin Luther III.

2) His birth took place when his father was delivering a speech to the Southern Christian Leadership Conference. Once informed of the birth, Martin Kuther King Jr. announced the baby’s name to the conference.

4) He faced racism at a young age.

King was only 8 years old when he was racially discriminated against by his classmate, a caucasian boy who would repeatedly harass him. King then got to know that the boy liked drawing. He then subsequently approached the boy and complimented him on his drawings. The harassment then ceased.

5) Martin Luther King III was only 10 years old when his father was assassinated.

6) He was arrested for ‘disorderly conduct’.

On 26 June 1985, he, his mother and his sister were apprehended for participating in an anti-apartheid protest, subsequently, they were charged with ‘disorderly conduct’.

6) He was in opposition to the death penalty. He stated that if we believed in the motion of an eye for an eye and a tooth for a tooth, then most people would be left without eyes or teeth.

7) From 1987 to 1993, he served as a county commission member in Fulton County, Georgia. Making him the first from his father’s immediate side of the family to be involved in politics. 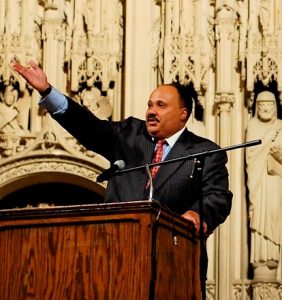 8) The Southern Christian Leadership Conference (SCLC) elected King as the President in 1997. An organisation that his father founded for African-American civil rights.

9) As president of the SCLC, King advocated issues related to police brutality, racial profiling and prisoner’s rights. Additionally, he wanted to remove the gap between blacks and whites.

In spite of having great ideas, King was often criticised for not holding demonstrations against national issues previously taken up by the organization. He was further criticised for not dealing with the issue of AIDS because King was allegedly uncomfortable talking about condoms.

11) He was suspended from the presidency of the SCLC in 2001, although it was only for a week. Once reinstated as president, he promised to take active leadership of the organisation

12) In 2006, King founded the organisation called ‘Realising the Dream’. Later renamed as the ‘The King Centre’, an NGO to carry out the legacy of his parents.

13) King’s march in Tennessee at the 40th anniversary of his father death.

14) Legal troubles within the family.

In July 2008, Martin Luther King III and his sister Bernice King filed a lawsuit against their brother, Dexter King. Accusing him of transferring money from their mother’s estate to Martin Luther King Jr. Inc. An organisation presided over by their brother. The suit accused Dexter King of not informing his siblings about the company’s financial affairs. Dexter King then retaliated by filing a countersuit, which accused Martin and Bernice of misusing the assets of The King Centre. In October 2009, the King siblings settled the lawsuit in court and subsequently settled their differences.

15) In 2009, King and his wife travelled to India and participated in a delegation in New Delhi. While in India, King visited museums that depicted the life of Mahatma Gandhi. He additionally delivered a lecture at the Indian Council for Cultural Relations where he condemned the Mumbai attacks.

Martin Luther King III spoke at the 2008 Democratic National Convention. An event that commemorated the 45th anniversary of Martin Luther King Jr’s ‘I Have a Dream’ speech along with the first time an African American was going to be elected as president.

Martin Luther King III stated at the Convention that his father would be proud of Barack Obama, of the party that elected him and the Americans who elected him. He added however that there is still a lot to achieve and his father’s dream was yet to be fulfilled. This was because the country was still suffering from poor health care, inadequate education system, housing system and justice system. Further adding that the American public has to roll on their sleeves and work to ensure that his father’s dream is fulfilled.

17) In 2009, on the occasion of a nationwide day of community service, Martin Luther King III joined Obama in the painting of a homeless shelter for teens in Northeast Washington.

18) He also paid homage to Michael Jackson at his funeral.

19) In 2011, on the 43rd anniversary of his father death, King helped to lead nationwide marches and demonstrations. It was against initiatives to remove the collective bargaining rights of public workers in Wisconsin and other states.

20) King’s shocking statement “African Americans should engage with the Republicans”.

In a talk show interview called ‘The Cycle’, he was asked by the host Touré, if he believed that the democratic party has done enough to have the support of the African American people. To which King replied that they haven’t. He further stated that one has to find ways to make the party accountable and that African Americans should engage with the republicans. They should be independent and should be engaged with the tea party. This statement visibly shocked Touré.

Touré then went on to question why should the African-Americans do such a thing to which King responded that the only way one changes is to be least communicating. If there is no communication you cannot let someone have an agenda. He further explained his statement saying that his father often met with white men who opposed civil rights, just to have an exchange of dialogue.

During the impeachment trial of Donald Trump, a member of Trump’s legal counsel quoted Martin Luther King Jr. in defence of the president. Following this Martin Luther King III gave a statement saying that the Trump administration is a hypocrite. Further stating that they invoked his father’s words but failed to address the issues most important to his father and his civil rights advocacy.

Enjoyed the above article? You may also enjoy Seven Black Heroes In History that you will love reading