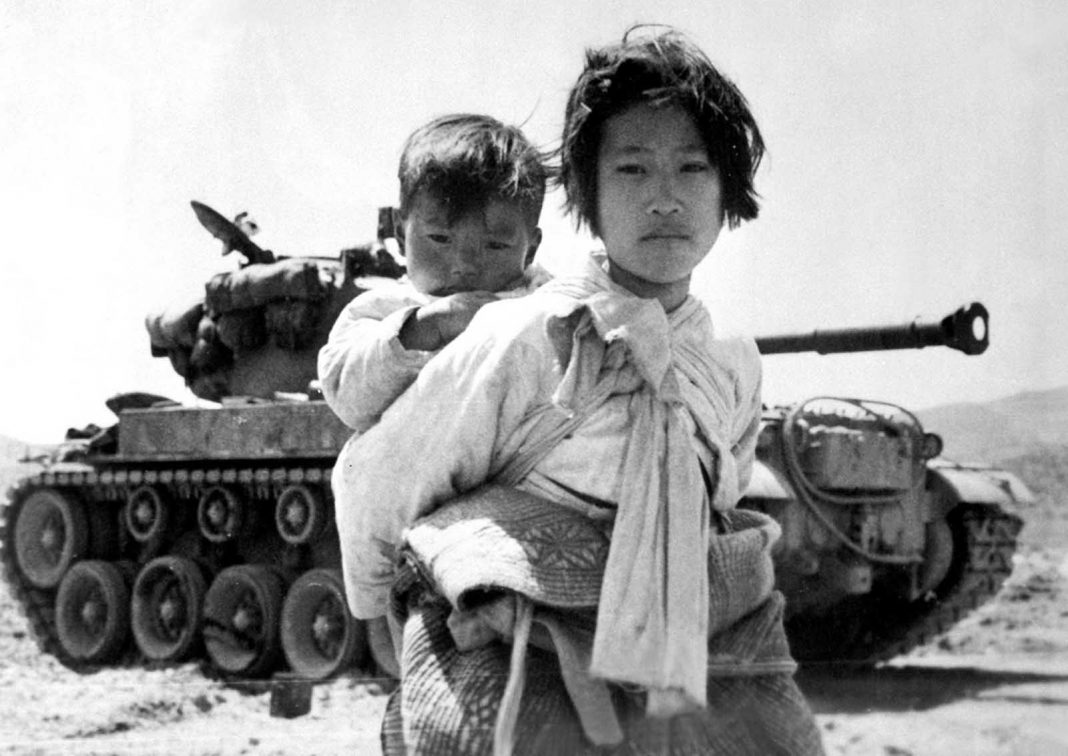 After World War II, Korea split into North Korea and South Korea respectively. The Korean War was a military conflict fought between the two. Additionally, the Soviet Union, the United Nations with the United States and China also got involved in the war. Subsequently, the Korean War ended with Korea divided into two hostile territories. We have compiled a list of pictures that depict the Korean War.

Let us take a look at The Korean War- in pictures. 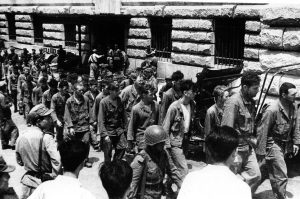 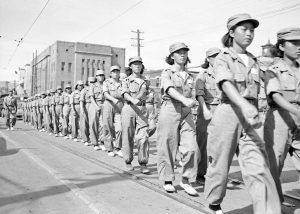 3) A picture depicting troops digging into bunkers atop Old Baldy in Korea in 1952. 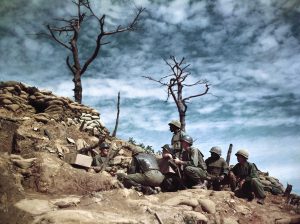 4) American soldiers in South Korea camouflage their weapons carrier while keeping an eye out for the enemy. July 12, 1950. 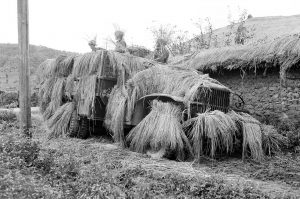 5) A picture depicting three communists captured by the United States Navy off the coast of Korea. May 10, 1951. 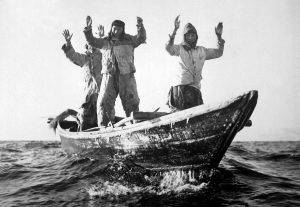 6) A picture depicting captured North Korean girls marched to a train that will take them to a prisoner of war camp at Pusan. Taegu, South Korea, October 8, 1950. 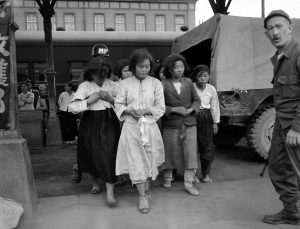 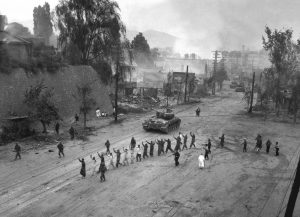 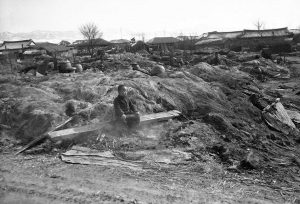 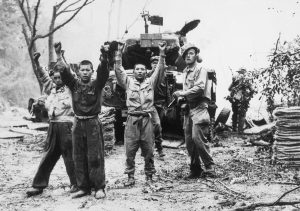 10) A picture depicting North Korean soldiers and their tanks in Seoul during the Korean War. 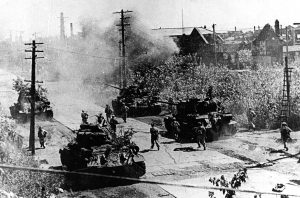 11) American forces and their tank landing ships unload at Inchon on September 15, 1950. 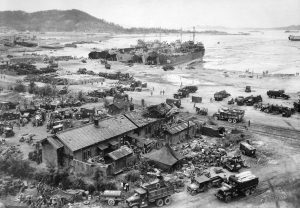 12) U.S. troops position a howitzer near the Kum River during the Korean War. 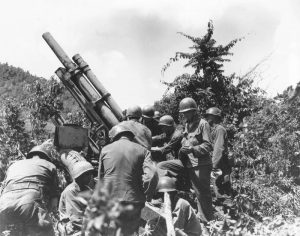 13) A picture depicting combat in the streets of Seoul during the Korean War. 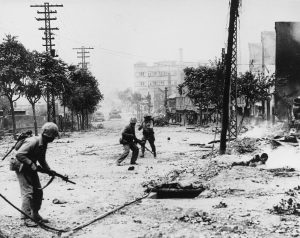 14) A picture of Chinese troops crossing the frozen Yalu River during the Korean War. 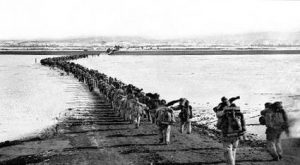 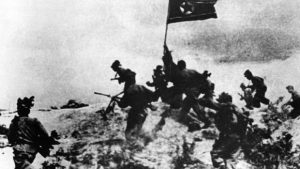 16) Korean refugees wait in line to board a vessel in Hungnam harbour, North Korea on December 21, 1950, as they flee the advancing Chinese and North Koreans. 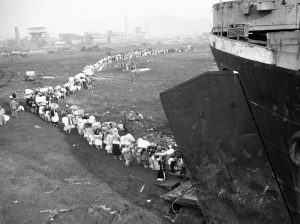 17) Another picture depicting refugees waiting to evacuate at Hungnam. 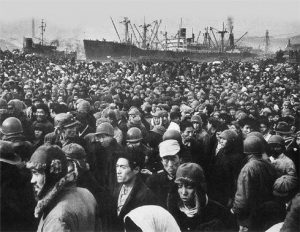 18) A picture depicting smoke rising from the ruins of the village of Agok in the northern region of South Korea, August 1950. 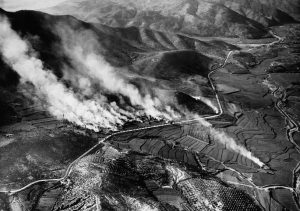 19) Paratroopers from the 187th RCT jump from aircraft near the North Korean towns of Sukchon and Sunchon. October 20, 1950. 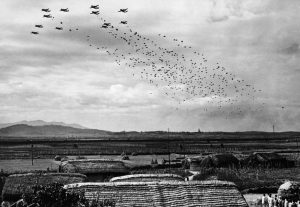 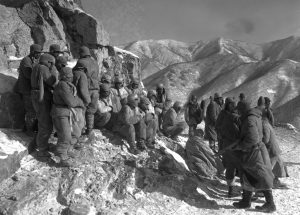 21) American GIs and Korean troops stack up a large pile of empty artillery and mortar shell casings at a collecting point near the front on June 18, 1953. 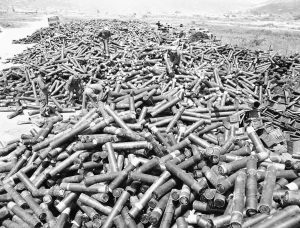 22) A young Korean girl carries her brother on her back as she passes by a stalled tank. Haengju, Korea, June 9, 1951. 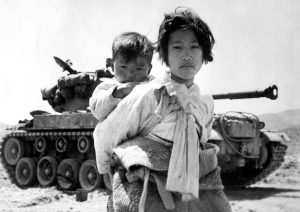 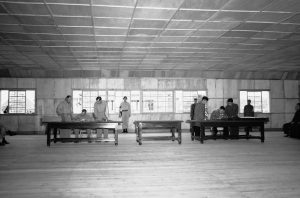 24) Four U.S. Marines just off the fighting line on the Western Korean front read the good news in an official handout that armistice to end the war was going to be signed soon. Panmunjom, July 26, 1953.

25) A picture depicting PFC Donald Jones of Topeka, Kansas reading a sign put up on the south limit of the demilitarized zone in Korea on July 30, 1953. 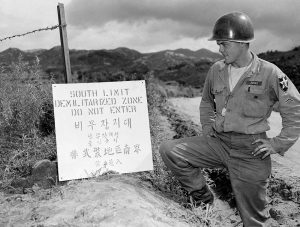 Enjoyed the above article? You may also enjoy The Battle of Somme- in pictures