10 Interesting Facts About Dr. Seuss That You Must Know!

Theodor Seuss Geisel a.k.a Dr. Seuss is a well-known children’s book author. He has written 60 books throughout his career which have spawned numerous adaptation in media. Apart from being a writer, he was also a political cartoonist, poet, animator and filmmaker. We have compiled a list of interesting facts about Dr. Seuss that you must know!

Let us take a look at 10 Interesting Facts About Dr. Seuss That You Must Know!

1) You can thank Prohibition for his pseudonym

When Geisel was a student at Dartmouth College, he was once caught drinking gin with a group of friends. During that time, consuming alcohol was illegal under Prohibition. As a result, he was asked to step down as the editor for the school’s humour magazine The Jack-O-Lantern. However, he continued to work for the magazine under the pen names Seuss and T. Seuss. He took up the pen name Dr. Seuss a few years later.

A fun fact is that the correct pronunciation of Seuss rhymes with ‘voice’ rather than ‘goose’, but Seuss eventually accepted the more popular pronunciation.

2) An interesting fact about Dr. Seuss is that his first book was rejected 27 times!

You read that right! Although he is one of the most celebrated authors today, his first children’s book ‘And to Think That I Saw it on Mulberry Street’ was rejected 27 times. In fact, for him, his 27th rejection signified the end of his writing career and he planned to burn the book once he got home. However, as he was walking dejectedly on Madison Avenue, he came across his Dartmouth friend Mike McClintock. By pure chance, McClintock had that very morning started a job as an editor in the Vanguard Press children’s section. This was the silver lining Geisel was looking for and within hours the two signed a contract. Subsequently, in 1971, Vanguard Press published Geisel’s first book, thus launching the author’s remarkable literary career.

“If I had been going down the other side of Madison Avenue, I’d be in the dry-cleaning business today”.- Dr. Seuss 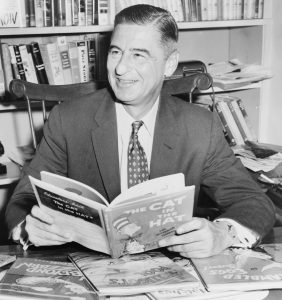 In 1943, Theodor Geisel enlisted himself in the U.S. army. Here he was put in command of the animation department of the 1st Motion Picture Unit.  It was during this time that he contributed to the creation of the famous Private Snafu cartoon series. Throughout the series, Geisel started using limited vocabulary and rhymes— something also seen in his later works like ‘The Cat in the Hat’, which only used 236 words. Geisel subsequently left the army in January 1946 having achieved the rank of lieutenant colonel. 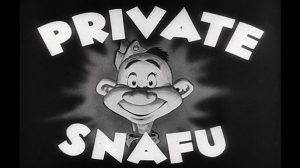 4) An interesting fact about Dr. Seuss is that he was a chain smoker

Geisel was essentially a chain smoker and spent many years trying to quit. To deal with his addiction he sucked on an unlit corn cob pipe that was filled with either radish or strawberry seeds. Whenever he was compelled to smoke he would water the seeds using an eyedropper. After about 3 days when a crop of radish greens or strawberry plants sprouted, he would return to cigarettes. He did this for many years however he could never break his addiction.

5) Dr. Seuss cheated on his wife, which probably drove her to suicide

During her later years, Seuss’ first wife Helen Palmer was suffering from a series of illnesses. Ultimately she was fighting a losing battle. Depressed by her condition and possibly by suspicions of her husband’s affair with a close friend, Helen took her own life in October 1967.

Eight months later, Seuss married Audrey Dimond, the woman he had been having an affair with.

It’s a popular myth that Seuss disliked children. However, little do people know that he and his first wife wanted children of their own—unfortunately, Helen could not have any. So what did Seuss do? Invent a child of course! When Seuss’ contemporaries bragged about their children, he would bring up the exploits of his own invented daughter Chrysanthemum Pearl. In one instance he boasted about her superhuman sewing skills and how she could make a mean oyster stew with chocolate frosting and flaming Roman candles. Additionally, he even gave a dedication to her in his book ‘The 500 Hats of Bartholomew Cubbins’, writing, “To Chrysanthemum Pearl, age 89 months, going on 90”.

Another interesting fact about Dr. Seuss is that he sold U.S. war bonds as a Boy Scout. In fact, he was one of the 10 best bond sellers in his group. As a result, he and his entire family were invited to attend a special ceremony that was held on May 2, 1918. Seuss was going to receive a special medal from former president Theodore Roosevelt. Unfortunately, the event organisers gave Roosevelt nine medals instead of 10, so when Seuss walked onto the stage, Roosevelt’s was out of medals. Not realising the error, Roosevelt remarked “What is this little boy doing here?”. Rather than explaining the situation, the Boy Scoutmaster whisked an embarrassed Seuss off the stage. Seuss later said that this incident caused his lifelong fear of public speaking.

Yes, you read that right! Seuss has won many accolades during his lifetime including two Academy Awards. The first was in 1947 for best documentary feature for ‘Design for Death’. And subsequently for the best animated short film with Gerald McBoing-Boing(1950). 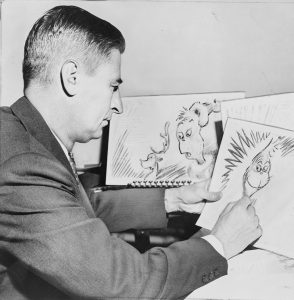 9) Dr. Seuss once wanted to test if his publisher was reading his works

Once Seuss believed his publisher would publish anything he had written. To test his theory, Seuss slipped in a contraceptive reference in the manuscript draft of Hop On Pop, which went like this:

As it turned out, his publisher was indeed reading his work and the line was cut from the final draft.

In March 2021, Dr. Seuss Enterprises announced that they would cease the publishing of six of his books due to the racist imagery that appears in them. The six books include ‘And to Think That I Saw It on Mulberry Street’, ‘If I Ran the Zoo’ and ‘McElligot’s Pool’. The company stated that “these books portray people in ways that are hurtful and wrong”. Further stating “Ceasing sales of these books is only part of our commitment and our broader plan to ensure Dr. Seuss Enterprises’ catalogue represents and supports all communities and families”.

Enjoyed the above article? You may also enjoy 15 interesting facts about the Sedan chair