Horatio Gates was born and brought up in the English county of Kent. In 1745, he decided to seek a career in the military. With the help of his parents and political aid, he served in the 20th foot Regiment in Germany during the Austrian Succession Wars.

After the end of the Austrian Succession Wars, Gates travelled to Halifax, Nova Scotia and became an aide to Edward Cornwallis. Due to his capabilities, he was made captain of the 45th Foot Regiment. As captain, he engaged in several campaigns against the Mi’kmaq and Acadians. 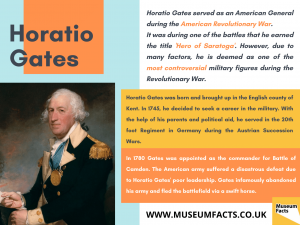 3) Horatio Gates learned of a position of open captaincy in Maryland. With the help of Cornwallis, he was able to obtain the post on credit. Subsequently, in 1755 he joined his new regiment under General Edward Braddock.

4) The French and Indian Wars

Horatio Gates was one of the officers who accompanied Braddock during his failed expedition. This expedition was an attempt to capture the French Fort Duquesne. However, Gates did not see much action in battle as he had suffered a major injury early in the battle. In 1759, he became Brigade Major to Brigadier Major John Stanwix. He held the same position when General Robert Monckton took over Stanwix’s command in 1760.

Following the success of the British expedition against Martinique, General Monckton gave Gates the honour of delivering news of victory to England. Subsequently, Gates was promoted to major. Following this advancement Gates’ military career stalled for quite a while. He then sold his major’s commission and decided to leave the army.

6) In 1772, Horatio Gates arrived in North America, following which he purchased a modest plantation in Berkeley County, Virginia.

The Revolutionary War broke out in 1775. After hearing about the war, Gates immediately went to George Washington and offered his services. Washington vouched for Gates’ appointment as adjutant to the American army. Gates was then appointed as Brigadier General and Adjutant General of the Patriots.

8) Due to his wartime experiences, Gates was of great help to the fledgeling army, he helped standardise records and organise the regiments of the army.

9) In May 1776, Horatio Gates was promoted to the position of Brigadier Major and was given command of the Canadian Department. However, this unit was in disarray. Many soldiers were lacking in morale and dissatisfied with the pay.

Horatio Gates then fell into conflict with Major General Philip Schuyler, the commander of the Northern Department over jurisdiction issues. After working out their issue, Gates got the command of Ticonderoga and the defence of Lake Champlain.

Once it was clear that the British were not going to attack anytime soon, Gates and some of his troops marched south to join Washington‘s army in Pennsylvania, where it had retreated after its disastrous defeat in the campaign of New York. Here Gates advised Washington to go on the defensive and retreat from the British forces in New Jersey. However, Washington dismissed Gates’ advice and advanced. Gates then feigned illness and did not join his troops at the battles of Trenton and Princeton and subsequently missed out on the victories.

After Gates was given command of the Northern Department, he led it to victory twice against the British troops who were under the command of Major General John Burgoyne. On October 17, 1777 Gates and his troops forced Burgoyne to surrender near Saratoga. This success was a major turning point during the American Revolution. Additionally, in 1778, it convinced France to form an alliance with the Americans against the British. The success of this battle gave Gates the title of ‘Hero of Saratoga’. However many argue that this victory is credited to his competent subordinate officers.

Horatio Gates infamously informed Congress of his victory directly instead of first reporting to his commanding officer Washington. Subsequently, Congress appointed Gates as the President of the Board of War. A post that made Gates superior to Washington, which conflicted with Gates’ lower military rank. He briefly held the position, but the infamous Conway Cabal marred his term. Subsequently, Gates apologised to Washington and resigned from the Board. He then became the commander of the Eastern Department in November 1778.

14) The disastrous Battle of Camden

In 1780, Gates was appointed as commander of the Continental forces in Deep River, North Carolina. As commander, he led an army that was a mix of Continentals and militia against the British forces under Lord Cornwallis. In the Battle of Camden, the American army suffered a disastrous defeat due to Horatio Gates’ poor leadership. Gates also infamously abandoned his army and fled the battlefield via a swift horse. Following the army’s defeat, Major General Nathanael Greene replaced Gates as commander of the Continental Army.

15) Aftermath of the battle

After the debacle of the battle, Congress called for a board of inquiry to look into Gates’ conduct. Gates was obviously against this and his supporters in Congress helped remove this threat. Gates then joined Washington’s staff at Newburgh.

After the war ended, Gates retired to his Virginia Plantation. In 1790, he sold his farm, freed his slaves and moved to ‘Rose Hill Farm’ an estate he bought in New York. His career ended after he served one term in the New York State Legislature. Horatio Gates died on April 10, 1806.