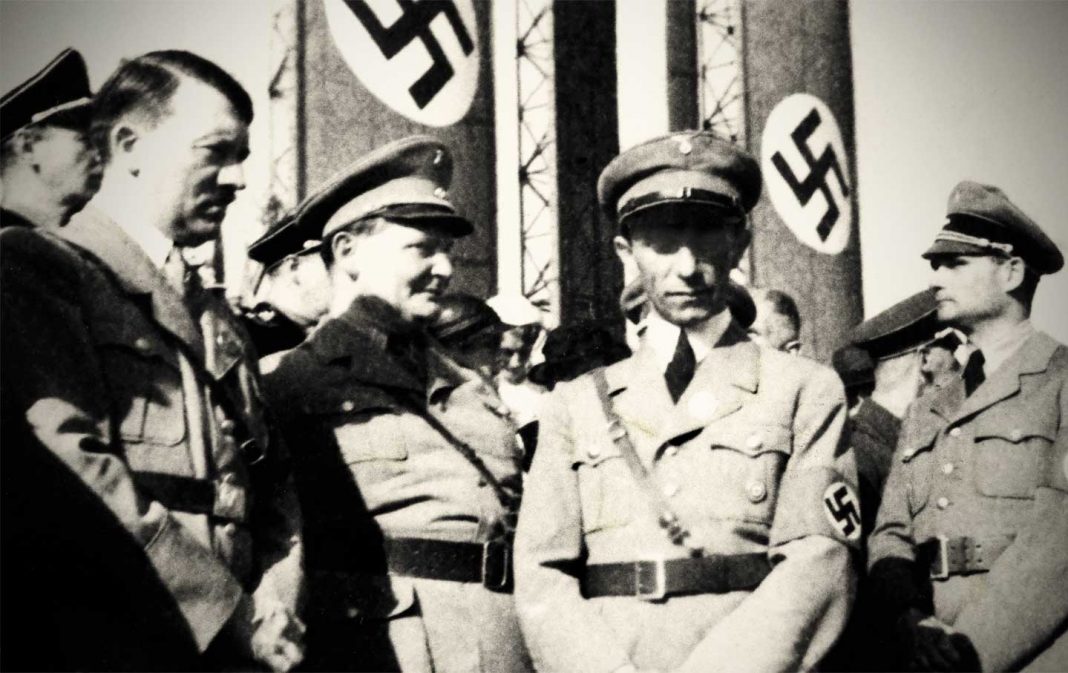 Hitler’s Inner circle consisted of his most trusted and loyal followers. These men are the ones who shaped Nazi Germany. Few were even with him during his final days at the bunker. These men were indicted with war crimes and crimes against humanity. Most of them committed suicide after the fall of Nazi Germany.

So who were these infamous men? Find out by reading about the 7 infamous men in Hitler’s inner circle.

Hitler’s Inner Circle consisted of important men of Nazi Germany. One such man was Martin Bormann. He was a powerful party leader. He joined the Nazi party in 1927. Subsequently, in 1933, he became Chief of staff for the office of Deputy führer, Rudolf Hess.

Bormann was extremely ambitious and involved himself in every decision making process. He wanted to create an extensive bureaucracy. Following Hess’s idealistic solo flight to Scotland to seek peace, Hitler appointed Bormann as the Reichsleiter. Bormann also acted as Hitler’s personal secretary and followed him everywhere. Bormann even controlled the flow of information and access to Hitler. Additionally, he managed all the briefings, requests and appointments. Such was his power that by 1943, Bormann officially oversaw all domestic matters.  Moreover, during this time, Bormann even controlled Hitler’s finances.

Martin Bormann was one of the few men with Hitler in the Führerbunke and remained with him during his final days. After Hitler’s death, Bormann became the party minister of the Nazi Party. Following this, he disappeared for quite a while, remaining M.I.A for several years. However, reports came in that he was hiding in South America but they were unfounded.

Skeletal remains were later found in West Berlin, one of these remains was identified as Martin Bormann. His alleged cause of death being cyanide poisoning. Bormann was indicted for his crimes and tried in absentia by the International Military Tribunal. He was charged and found guilty of war crimes and crimes against humanity.

Göring was the second most powerful man in Nazi Germany. He was the leader of the Nazi Party and another important man in Hitler’s inner circle. Göring is a World War I veteran, who was in the air combat force. During his stint as a pilot, he secured many victories. Additionally, he was the commander of the fighter wing of the Luftstreitkräfte.

Joining the Nazi Party in 1922, he was made the head of the Sturmabteilung (SA). He was also one of the injured during Hitler’s failed Beer Hall Putsch coup. Following the failed coup Hitler was imprisoned. Göring, a wanted man went into exile. He received amnesty in 1927 and then joined the Nazi party again. After the Nazi party won the July elections, they became the largest party in Reichstag. Subsequently, Göring became the President of the Reichstag. Göring then established the Gestapo, a Prussian police force.

Hitler was fearful that the SA was planning a coup against him. The head of the SA was Ernst Röhm and it had around 2 million members. Göring then personally singled out 85 members of the SA and assassinated them. This event, the ‘Night of the Long Knives’, ensured that the Nazi had full power. Göring was a popular leader and he was well-liked by the Nazi press and he was popular among the German people as well.

The dawn of World War II

In 1939, Hitler made a proclamation that Göring should succeed him as Führer if something were to happen to him. And during the 1940 Field Marshall ceremony, Hitler awarded Göring with the rank of Reich Marshal of the Greater German Reich, thus making him the highest-ranking soldier in all of Germany. By 1945, The Allies were closing and moving in, Hitler then moved into the Führerbunker. Göring assumed that Hitler was helpless and confined so he sent him a letter stating if he could assume the role of the führer. Hitler was convinced this was treason and placed Göring under house arrest. Hitler further rescinded his proclamation. After Hitler’s suicide, Göring surrendered to the Allies. He later killed himself before his execution.

Albert Speer was Hitler’s chief architect and the Reich Minister for armaments and war production. He joined the Nazi party in 1931. He was an excellent architect and his skills gained him prominence. Additionally, Speer was the founder of a task force that was instrumental in exploiting slave labour for the benefit of the German war effort. The Nuremberg Trials indicted him of war crimes. His lawyer presented him as an artist who had no political ideologies. On this basis, he narrowly escaped a death sentence. However, he was indicted of war crimes and crimes against humanity and sentenced to 20 years in prison.

After his release from prison, he went on to write autobiographies. Via them, he presented a carefully constructed image of him. He presented himself as a man who failed to realise the horrific side of the Nazi propaganda, he claimed that he was an apolitical technocrat. Additionally, he denied explicit responsibility and knowledge of the Holocaust. Until his death, Speer continued to deny that he had any knowledge of the Final Solution. However, a letter of 1971 indicates otherwise, in this letter Speer admits that he was present during the radical announcement made by Heinrich Himmler that all Jews should be killed.

4) Heinrich Himmler- The orchestrator of the Holocaust

Heinrich Himmler was another infamous man in Hitler’s inner circle. He was a leading member of the Nazi Party and the orchestrator of the Holocaust. He joined the Nazi Party in 1923. Hitler appointed him as the Reichsführer of the SS in 1929. He was instrumental in expanding the SS and by 1933 it had more than 50,000 members. Subsequently, he became the chief of the German police. Soon Himmler was controlling the entire police force in Germany, including the Gestapo. It was then that he established the first concentration camp at Dachau. Hitler was impressed with this and authorised Himmler to establish a centralized concentration camp system.

Furthermore, Himmler formed the Einsatzgruppen, the paramilitary death squad of Nazi Germany. They had an integral role in the mass extermination of the Jews. Additionally, it was Himmler who oversaw the Final Solution. He was behind the death of almost 6 million Jews, Romani people and other victims.

During the final years of the war, Himmler was suffering from psychosomatic illnesses. He then attempted to negotiate peace with the Western Allies. He did so without Hitler’s knowledge. Once Hitler got the wind of this he promptly stripped Himmler of his position and gave an order for his arrest. Himmler then tried to escape in disguise. But the Western Allies soon captured him. He killed himself while in custody.

Joseph Goebbels was one of Hitler’s closest associates and was deeply antisemitic. He was a great orator and often voiced his antisemitic views during his public speeches. Goebbels was the Reich Minister of propaganda and generally advocated a favourable image of the Nazi regime to the people of Germany. He joined the Nazi party in 1924. In 1926, he became the District leader of Berlin. It was at this time that he developed an interest in propaganda. He made use of propaganda models such as catchy slogans and posters. He further spread nazi propaganda by making emotional speeches. Goebbels was also the founder of the newspaper ‘Der Angriff’, the content of the newspaper was antisemitic and highly communist. Later in 1940, Goebbels became the editor of the newspaper, Das Reich.

After the Nazis seized power he became the president of the newly established ‘Chamber of Culture’. Holding this position essentially gave him control over all media such as the press, newspapers, radio and other arts.

Goebbels also strongly supported Total War and advocated it strongly. He wanted to bring the entire economy to a war footing. After the attempted assassination of Hitler, Hitler finally appointed Goebbels as the “Reich Plenipotentiary for Total War”. Thus charging him with expanding the manpower for the Wehrmacht. But it was too late and the men were not sufficiently trained for war.

Following Hitler’s death, Goebbels became Chancellor but only for a day. He killed himself and his family the following day.

Yet another notable member of Hitler’s inner circle was Joachim von Ribbentrop. He served as the Foreign Minister of Nazi Germany. He was a close confidant of Hitler. Additionally, he had offered his home for secret meetings of the Nazis. These meetings were instrumental in making Hitler the Chancellor of Germany. Ribbentrop joined the Nazi party in 1932. After the Party’s win in 1933, he became Hitler’s chief advisor of foreign affairs.

In 1936, Ribbentrop became the ambassador to the royal court of the United Kingdom. Subsequently leaving the post when he became Germany’s Foreign Minister in 1938. As a minister, he was instrumental in forming the ‘Pact of Steel’ with Fascist Italy. Another notable pact formed by him was the ‘Molotov-Ribbentrop Pact’, a non-aggression pact between Nazi Germany and the Soviet Union.

1941 onwards his importance and influence declined, as the war involved most of the world, the need for diplomacy diminished and so did the need for Ribbentrop. He further lost support from Hitler when most of the Foreign Ministry was involved in the July 20, 1944, attempted assassination of Hitler.

After the War, Ribbentrop was arrested and indicted for his crimes. Subsequently becoming the first defendant hanged at the Nuremberg trials.

Reinhard Heydrich a.k.a the butcher of Prague was the main organizer of the Holocaust. He is regarded as the darkest figures in Nazi Germany and Hitler called him ‘a man with an iron heart’. Heydrich was initially in the German Navy but was dismissed because he was found guilty of misconduct. Following this, he joined the Schutzstaffel (SS). After a chance encounter, Heinrich Himmler gave him the command of the Sicherheitsdienst, a division of the SS.

In 1934, Himmler became the chief of German Police and Heydrich subsequently became head of the Gestapo, Kripo and SD. He was instrumental in carrying out the Night of the Broken Glass (Kristallnacht), a pogrom against the Jews. Historians claim that this was the start of the holocaust.

Additionally, he formed the Einsatzgruppen, a squad that was responsible for killing around 2 million people. He was also instrumental in the infamous Nisko and Lublin plans. These plans encased the deportation of all European Jews to Madagascar Island. An implausible plan which was never implemented.

On July 31, 1941, Heydrich was given command of organising the Final Solution. Following this, he chaired the infamous Wannsee Conference. The discussions of the plans and logistics for the Final Solution took place during this conference.

In 1942, Heydrich was severely wounded during an assassination attempt by the Czechoslovak government-in-exile. Although he survived the assassination he sustained heavy injuries. Succumbing to them in the following weeks.

Enjoyed the above article? You may also like 7 famous World War II Military Operations