History of C Sections And Its Evolution

Cesarean section is a surgical childbirth procedure done by making an incision on the mother’s womb to help deliver the baby. Today, cesarean sections, commonly referred to as C sections, aren’t very uncommon. In fact, one-third of children’s delivery in the United States are C sections. However, not many of us are aware of the history of C section.

A study suggested how 35.2% of mothers believed that children born via c section were smarter. Although this can’t be generalised, Scipio Africanus, one of the greatest strategists and commanders, makes a fit. He is famous for defeating Hannibal in the Battle of Zama in 202 BC. Africanus was born via c section.

Once upon a time, a C section wasn’t as doable as it is now. It was the last resort during complications in labour and often impacted the mother and baby badly. Keep reading to know how man went from using a stone cutting tool to cut the mother’s womb open for the first time to several other scientific advancements prevalent today.

1. The birth of cesarean sections

The idea of cutting open the mother’s womb and abdomen to deliver the baby dates back to the later bronze age. However, experts say that the first C section is very likely to have happened even before that. In fact, one could say that the very first surgical procedure of human history was when man made an incision on a pregnant mother’s womb with a stone cutting tool. Legend says that several gods were born by C section, including Apollo who pulled the baby out from his wife’s womb.

2. The Romans and C sections

The Romans were the first to develop and document C sections as a surgical procedure. Moreover, a law named Lex Caesaria existed in ancient Rome. According to the law, if a woman died during childbirth, the baby must be removed after cutting open the mother’s womb. Surprisingly though, the law’s primary intention was not to save the newborn. Instead, it was done because the religious customs did not allow a pregnant woman’s burial. Chances are the religion did not allow the mother and child to be buried together as well; hence they were separated.

For several centuries after, C sections did not save the mothers. It wasn’t considered as an option until the woman was close to dying or dead. Even if she were alive, there were almost no chances of her being well after the procedure. When they tried to stitch the woman’s womb back together, she died of infection. Historical records state that it didn’t do much good for the babies as well. C-section babies often died at birth due to oxygen deprivation or were not very healthy if alive. 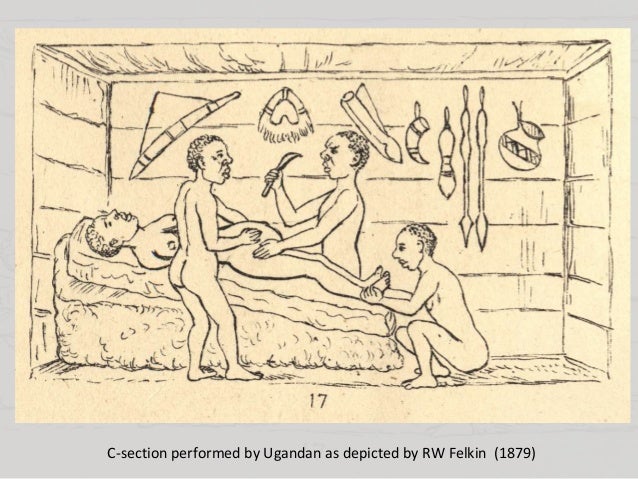 3. Myth – The first child delivered through a cesarean section was Julius Caeser

It is a common misconception that the term cesarean section derives from the name Julius Caesar, who was the first child delivered via a C section. This theory is false; however, it is difficult to pinpoint who exactly started this story. Although, according to historians, a 10th-century document named The Suda, a Byzantine-Greek historical encyclopedia, could be the culprit. The book states that after Julius’ mother died at nine months, medical practitioners cut him open from her womb. Caeser earned his named after that incident. However, today, from several records’ findings, we know that this isn’t true.

In fact, cutting open a mother’s womb was part of several cultures before, not just the Romans. Moreover, the law in Rome, Lex Caesaria, existed at the time of Numa Pompilius. This was around 715-673 BC, which was much before Caesar’s birth. The Suda was incorrect about Caeser’s mother too. His mother, Aurelia Cotta, did not die during childbirth. As we mentioned above, the procedure was usually the last resort to save a newborn’s life. As far as most historians can tell, most mothers’ lives ended while doing the surgery due to blood loss and unsanitary conditions. Hence, it is doubtful that Aurelia Cotta underwent a C section. Several records state that she was with Caeser through adulthood and was even one of his political advisories. In fact, some historians believe that she survived him after his death as well.

With the onset of the renaissance period, c sections experienced drastic changes. Medicine and science advanced and the 1500s produced written records of caesarian surgeries wherein both the mother and child survived. According to historians, the first woman to survive a c section was a pig castrator’s wife in Switzerland. The husband, Jakob Nufer, cut her stomach after labour was unsuccessful for many days. He took the baby out and sewed her up as he dealt with his pigs. Records state that the woman had up to five children, including a set of twins. However, some historians do not agree with this incident and believe it happened almost a century later. As this procedure was not well documented, we can’t say either.

Britain produced successful c sections only in the early 1800s. Amerca did so shortly after that. She was the doctor’s wife, Dr. Jesse Bennett, and his wife, Elizabeth Bennett. This occurred in 1794. However, in 1865, a mother’s chance of survival was just 15%.

Medicine improved drastically in the 19th century’s latter part due to advancements in innovations and discoveries. The revolution of anesthetics changed the C sections’ game plan. Not only did it give the mother a painless experience, but it also reduces the chances of getting a maternal shock, which caused the maximum number of deaths in the past. Earlier, doctors had to crush the baby’s skull through a craniotomy procedure while taking them out of the mother’s womb. But, the anesthesia became a much more viable option. Yet, the mothers would still die from infection post the surgery; however, that changed with the introduction of bacteriology and germ theory towards the end of the 19th century.

With the introduction of antiseptics at the start of the 20th century, it was safe for doctors to carry out caesarian sections. By 1920, they were similar to the procedures today and not viewed as the last resort. In fact, doctors performed it at the sign of trouble instead of waiting days for labour. Along with that, more and more births took place in hospitals compared to 10% in the 19th century. By 1955, 90% of mothers delivered in hospitals.

Now that you know the history of C sections, we will share some crazy yet true stories surrounding the procedure with you.

Inés Ramírez Pérez of Mexico proved that she could be just as good as any other doctor with no medical degree. Jokes aside, her self-inflicted cesarean section was successful. After twelve hours of worsening pain, Ramírez drank some hard liquor and cut open her abdomen with a kitchen knife. After an hour of operating on herself, she pulled out her baby boy. Well, we are happy for them, but Ramírez got lucky!

James Barry is not just known for performing the first successful cesarean in Africa. What stunned the rest of the world is how Barry managed to pass as a man for almost half a century. Yes, you heard that right. James Barry was, in fact, born woman. Her name was Margaret Ann Bulky originally. Since women in the late 1700s and early 1800s were not allowed to practice medicine, Bulky disguised as a man, and we got to admit, she did a pretty good job!

It is often said that no man can bear the pain of childbirth. There is no doubt that women are strong, check out 5 badass women pirates.