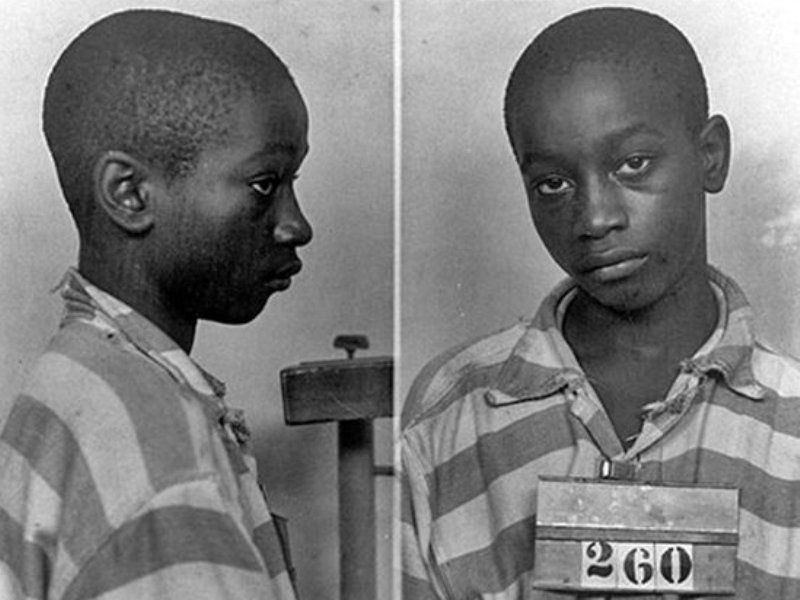 George Stinney Jr. was a 14-year-old African American child who was executed in the murder case of two white girls, Betty June Binnicker (11 years old), and Mary Emma Thames (7 years old) in 1944. Consequently, he became the youngest American and also the youngest person in the 20th century to be executed by electrocution. His trial and conviction essentially showcase the blatant racism in the justice system.

1) Who was George Stinney Jr.?

George Stinney Jr. was born and brought up in Pinewood, South Carolina, United States. He belonged to the segregated sawmill town of Alcolu, where black and white people were separated by railroad tracks. Additionally, Stinney attended Alcolu’s school for black children where he was a student of 7th grade.

On March 23, 1944, two white girls Betty June Binnicker (11 years old), and Mary Emma Thames (7 years old) were riding on their bicycles in Alcolu. They were in search of flowers. On their way, they halted near George Stinney Jr.’s house where they spotted Stinney sitting with his sister Aime. The two sisters then asked them where they would get maypops, the yellow edible fruit of passionflowers. Reportedly, that was the last time the girls were seen alive.

Subsequently, news broke that the girls had disappeared. After which hundreds of Alcolu residents, including Stinney’s father, set out to search for the missing girls. However, they were not found that day. The next day a search party discovered the mutilated dead bodies of the two girls lying in a soggy ditch.

Subsequently, Dr Asbury Cecil Bozard examined the dead bodies and concluded that the girls had met with a violent death. However, there was no clear sign of a struggle. Additionally, the girls had multiple head injuries; with a hole boring through Thames’ skull and Binnicker receiving at least seven blows to her head.  Bozard further stated that a “round instrument about the size of the head of a hammer” was used to attack the girls.

Even though there were rumours that the girls had a stopover at a prominent white family’s house, the police never investigated them nor did they search for a white killer. After receiving reports that the girls had stopped at Stinney’s house, the law enforcement officers arrested George Stinney Jr. and his older brother Johnny. Although they released Johnny, they kept 14-year-old George in custody. 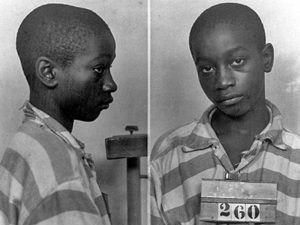 5) Police officers claimed to have received a murder confession from George Stinney Jr.

Subsequently, George Stinney Jr. was interrogated in a small room in the absence of his attorney, his parents and witnesses. After the interrogation, police officers stated that they had received a confession from Stinney saying that he had killed Binnicker and Thames. The reason being that he wanted to have sex with one of the girls and as he failed to do so, he killed them both.

H.S. Newman, one of the police officers made a handwritten statement  “I arrested a boy by the name of George Stinney Jr. He then made a confession and told me where to find a piece of iron about 15 inches long. He said he put it in a ditch about six feet from the bicycle”.

6) Amid rumours of mob lynching, Newman refused to reveal where Stinney was being detained. Additionally, the boy’s parents had no information about his whereabouts as well.

Stinney’s trial began almost a month after the girls’ death. The Clarendon County Courthouse appointed Charles Plowden as his lawyer. However, Plowden did little to nothing to defend Stinney. During a trial that lasted only two hours, Plowden failed to call any witnesses to the stand or present any evidence which would convince the jury of George Stinney Jr.’s innocence. The only significant evidence against him was his alleged confession, although a written record of his confession was not produced.

Additionally, by the time the trial began, Stinney had not seen his parents in weeks and during the trial almost 1,500 strangers surrounded him. The child was virtually alone. Moreover, no African Americans were allowed inside the courthouse.

An all-white jury deliberated the murder case for only 10 minutes before pronouncing George Stinney Jr. guilty of rape and murder, plus they didn’t recommend mercy for him. As a result, Judge P.H. Stoll of Kingstree pronounced Stinney’s death sentence on April 24, 1944.

9) Protests and campaigns to save Stinney

However, George Stinney Jr.’s execution was not without protest, and as the date of his execution progressed, various campaigns and protests started across South Carolina. In an attempt to save the young boy’s life, protestors petitioned Governor Olin Johnston; demanding mercy for Stinney. Additionally, the protestors sent hundreds of letters and telegrams to the governor’s office and they all demanded clemency. However, it was all in vain and in the end, Stinney could not be saved.

On June 16, 1944, George Stinney Jr. was set to be executed at the South Carolina State Penitentiary in Columbia. He walked into the execution chamber in loose-fitting overalls with a bible tucked under his arm. At the time of his execution, he was 5’1″ and weighed 95 lbs.

Stinney was then strapped to an adult size electric chair and covered with a mask that was too big for him. Officials then turned on the switch. The first jolt of electricity caused the mask to slip from Stinney’s face, to reveal his teary-eyed expression. Subsequently, after two more jolts of electricity, Stinney was declared dead.

14-year-old George Stinney Jr. became the youngest American and also the youngest human in the 20th century to be executed by electrocution. 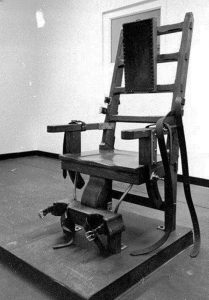 11) Justice is delivered after 70 years

In 2014, George Stinney Jr. was finally exonerated. His siblings stated that his confession was coerced and that he had a solid alibi; stating that he was with his sister Aime watching the family’s cow. They also stated that a man named Wilford Hunter, who claimed to be Stinney’s cellmate said that Stinney maintained his innocence till the end.

After his exoneration, Stinney’s sister, Katherine Robinson said, “It was like a cloud just moved away”. Further saying that “when we got the news, we were sitting with friends… I threw my hands up and said, ‘Thank you, Jesus!’ Someone had to be listening. It’s what we wanted for all these years.”

Enjoyed the above article? You may also enjoy The Mysterious Death of Elisa Lam