8 Forgotten weapons you need to know about! 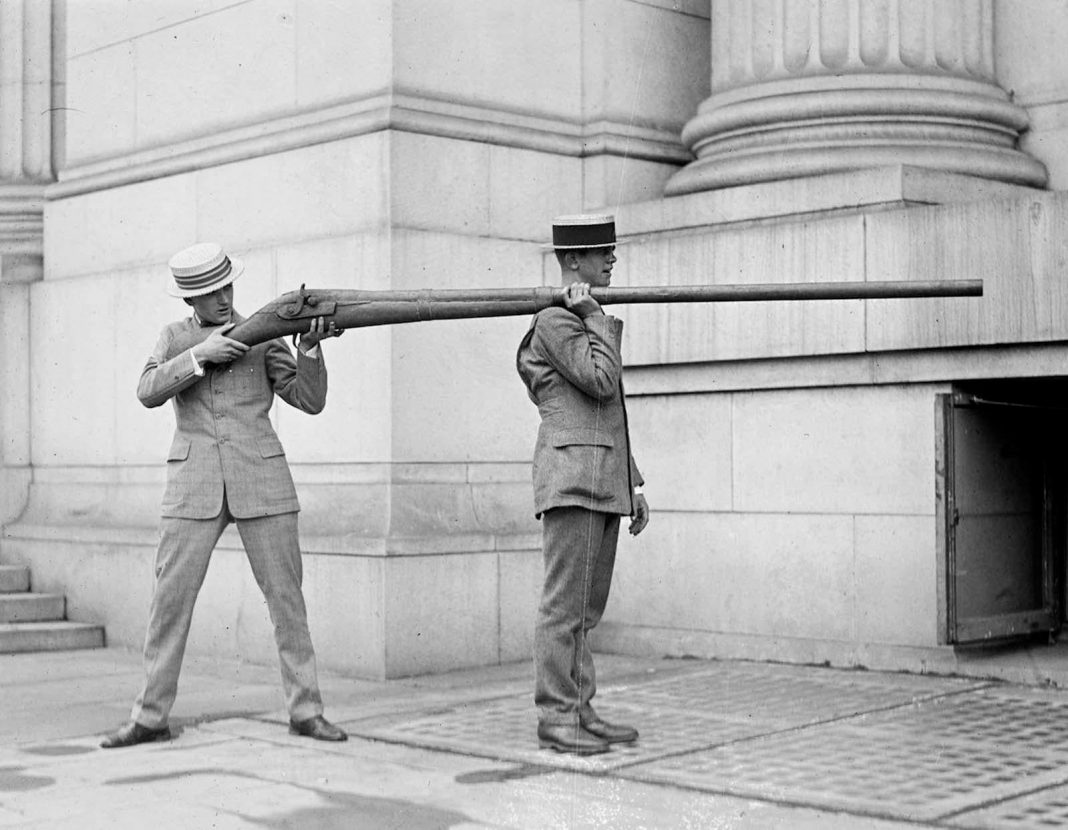 Weapons are essentially devices that can be used with the intent to inflict harm or damage. Additionally, weapons can be used for self-defence, law enforcement, hunting, crime and warfare. We have compiled a list of forgotten weapons you need to know about, these include the puckle gun and the punt gun.

Let’s take a look at 8 Forgotten weapons you need to know about!

Invented by James Puckle, the puckle gun or the defence gun is one of the earliest weapons to be referred to as the ‘machine gun’. The puckle gun is essentially a tripod-mounted, single-barreled flintlock revolver. The unique aspect of the gun is that it had two versions. It was designed to fire round bullets at Christians and square bullets at Muslim Turks. The square bullets were more detrimental than the round ones. The patent even stated that it would “convince the Turks of the benefits of Christian civilization”.

In 1717 a prototype was shown to Great Britain’s Board of Ordnance who were not sold by it, subsequently, it was rejected for government use. One reason being that it was inferior in fire rate and the flintlock mechanism was too undependable. However, Puckle patented the gun and then set up a company in 1721 to market it. Furthermore, the gun was quite ahead of its time and could not overcome the handicap of 18th-century flintlock technology. As a result, the puckle gun attracted only a few investors and ultimately wasn’t a commercial success.

A punt gun is a type of weapon which was designed to be fired from a punt(a small skiff boat). It is essentially a huge shotgun that was used to hunt large numbers of waterfowl as efficiently as possible. According to records of the 19th and early 20th century, these guns killed more than 90 birds at once. Additionally, the guns packed so much power that when fired, the boat would actually be blown back several feet.

However, punt guns were quite detrimental to the duck population and their numbers began to drastically decline.  As a result, by the mid-19th century, the United States passed a series of federal laws that banned the punt gun, along with punt boats. Today, they are more of a collector’s item, with less than 100 in use around the world. However, they are still used in the United Kingdom, though only for ceremonial purposes. Additionally, there are restrictions in its usage, most of which insist upon smaller barrel sizes and lesser ammunition.

Karl-Gerät, literally translated as ‘Karl-device’ was a self-propelled siege howitzer. It was designed and built by the Rheinmetall corporation during World War II. It subsequently became the largest self-propelled gun ever built. This intimidating gun was called many nicknames such as Thor, Odin and Loki.  This enormous weapon was used in combat as well. In fact, it saw significant action during the Warsaw Uprising and participated in the Battle of Bulge and Battle of Remagen. Ultimately, seven Karl-Gerät howitzers were manufactured. However, due to their immense size, their capabilities were limited. Furthermore, each gun had to be accompanied by a crane, a two-piece heavy transport set of railcars, and modified tanks to carry shells. After WWII, these weapons were seized and scrapped.

The bouncing bomb or the HighBall was designed by Barnes Wallis. It was cylindrical and measured 60 inches long and 50 inches in diameter. As suggested by the name, it was a 9,000-pound motorized bomb designed to bounce to a target across the water in a calculated manner. When it reached above its target, it would sink below the surface and explode. This forgotten weapon was used in WWII during Royal Air Force’s Operation Chastise. Here they dropped bombs that would bounce into German dams and explode underwater.

Schwerer Gustav, also known as Great Gustav was a railway gun. It is also one of the largest guns ever created. Plus it holds the title of the heaviest mobile artillery ever built. Schwerer Gustav was built before the occupation of France and was built to penetrate the fortified walls of the French Maginot Line. This impressive weapon was 107 feet long, 23 feet wide and 38 feet tall. It weighed over 1,350 tonnes and was operated by a crew of 250 soldiers. Additionally, another 2,500 were employed to lay down the tracks for its movements. Furthermore, two flank battalions were given the task of protecting it from air attacks.

However, France surrendered quickly and it obviated the need for the weapon. In the end, the mighty weapon saw little action. It was used once during the siege of Sevastopol and once during the Warsaw Uprising. The weapon was ultimately destroyed on April 14, 1945, in order to prevent its capture.

The Paris gun is essentially a type of German long-range siege gun. Many of these siege guns were used to bombard Paris during World War I. This impressive gun could hurl a 120kg shell with 7kg of explosive to a range of 131 km and an altitude of 40 km. It was also called Kaiser Wilhelm Geschütz and was often confused with Big Bertha and Langer Max, two completely different weapons. However, as military weapons, these were not a great success as the payload was small and the barrel required frequent replacement. Additionally, the gun’s accuracy was good enough for only city-sized targets. Ultimately, the German objective was to build a psychological tool to attack the morale of the Parisians and not destroy the city itself.

During the 18th and 19th century, grave-robbing was a major problem in Great Britain and the United States. During those times medical students and practitioners could only legally dissect the bodies of executed criminals or people who donated their body to science(not a popular choice then). As a result, illegal trade in procuring corpses sprang up. Hence the cemetery gun was essentially protection against these grave robbers or ‘resurrection men’.

The gun is set up on a mechanism that lets it spin freely. The cemetery keepers essentially mounted the flintlock weapon at the foot of the grave, and it had one or three tripwires strung in an arc around its position. Hence if a grave robber stumbled over the tripwire in the dark, it would trigger the weapon- thus hurting the thief. These guns were soon outlawed and were replaced by ‘coffin torpedos’; landmines that exploded if a grave robber opened a grave.

Duckfoot pistols were named after their barrels which resembled a duck’s feet. The gun could have between three to six barrels and these were aimed in different directions. The principle behind the gun was easy; it was used when a single person was confronting a group of persons. It was especially useful for naval officers, prison wardens or bank guards who could be attacked by many people at once.

Enjoyed the above article? You may also enjoy Weapons and Artilleries Used In WW1 – 8 Facts

Previous articleDarryl Stingley- Career| Hit| Legacy
Next articleQueen Elizabeth often walked among the public, during one such walk near her Balmoral estate, she met some American tourists who did not recognise her. They subsequently asked her whether she had ever met the Queen. To which she replied “no”, then pointed to her protection officer and said, “he has”. The tourists did not connect the dots.