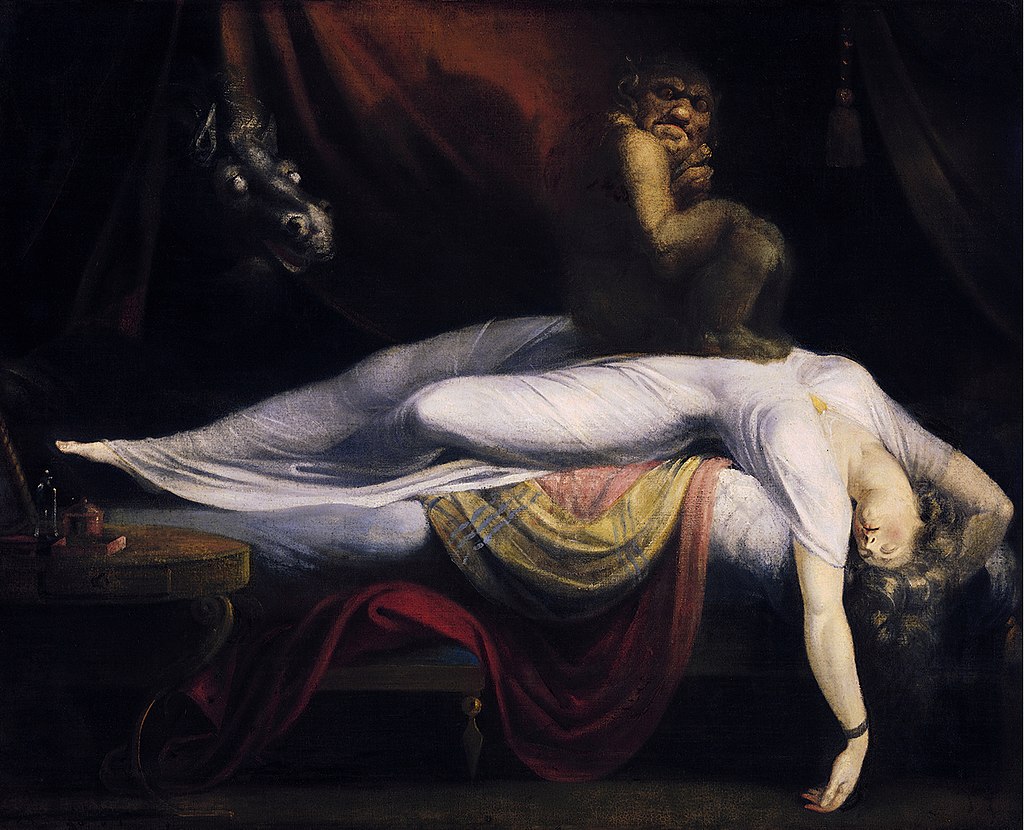 Art history is filled with paintings that visit dark and scary themes such as death and horror. These famous scary paintings were often centred around religious themes, mythology and the artist’s morbid imagination. We have compiled a list of such paintings which will surely give you nightmares!

Take a look at the 11 famous scary paintings that will give you nightmares!

This famous scary painting is a distorted version of the art piece Portrait of Pope Innocent X by Spanish painter Diego Velázquez. A controversial artist of the 20th century, Bacon spent more than 20 years making different versions of Velázquez’s Portrait. Moreover, he saw the original piece only once in person which was after producing various interpretations of it. The disturbing art piece depicts the pope screaming and the harsh purple brush strokes show the dark theme of the painting.

As the name suggests, this scary painting is essentially severed heads painted in a grisly and dark manner. Géricault was an influential French painter whose best-known painting is the ‘Raft of Medusa’, which incidentally caused a great scandal. Additionally, he kept dismembered body parts in his studio, which included a severed head.

According to traditional Greek myth, the Titan Cronus (in the title Romanized to Saturn) devours each of his children because he feared they would overthrow him one day. Goya’s painting graphically depicts this act of murder.  This painting is one in a series of 14 ‘black paintings’ Goya painted directly onto the walls of his house which were never intended to be viewed by the public. However, after his death, the painting was transferred onto a canvas and is on display at the Museo del Prado, Madrid.

The Nightmare is a 1781 oil painting by Henry Fuseli which horrifies and fascinates patrons and critics alike. The painting depicts a demonic ape-like incubus crouching on a sleeping woman chest, while a horse with flared nostrils peeps from the curtain. Since its first exhibition at the Royal Academy of London, various people have interpreted it differently. Additionally, it has also been the subject of many psychoanalytic theories regarding dreams. The Nightmare is essentially a conglomerate of horror, sexuality, and morbidity which even attracted the renowned neurologist Sigmund Freud who allegedly kept its reproduction on the wall of his Vienna apartment.

The Face of War is a painting by Spanish surrealist painter Salvador Dalí and it depicts the morbidity of war. The scary painting portrays an emancipated head of a man-much like a corpse- with identical faces in its eye sockets and mouth. The heads wear a miserable and bleak expression while serpents attack them. It was created by the painter during his brief stay in California and is believed to have been inspired by the Spanish Civil War.

6) ‘Dante And Virgil’ William-Adolphe Bouguereau, 1850- a scary painting depicting a scene from The Divine Comedy

The painting essentially depicts a scene from The Divine Comedy, where Dante and Virgil watch a gristly fight between two damned souls. The story goes that when Dante and his guide Virgil venture through hell, they are stopped at the Eighth Circle. This circle belongs to those who cheat and commit fraud on humanity. Here they witness the eternal combat between two damned souls. The painting depicts the fight’s climax where one of the fighters has the upper hand and bites the neck of his opponent. The graphic nature and meaning of the painting truly deem it as a scary painting.

The painting portrays the biblical incident ‘murder of the innocents’ where King Herod the Great, King of Judea ordered the execution of all boys below the age of 2. This infanticide is graphically depicted in the painting and is not for the fainthearted. Its main theme is centred around the struggle between the mothers, the soldiers and the infants. Rubens made two paintings under the same theme. He painted the one below after his return from Antwerp in 1608. This scary painting is famous for portraying a range of emotions: desperation, violence, grief, motherly love and mercilessness.

Judith Beheading Holofernes is Carravaggio’s stark interpretation of an event from the deuterocanonical Book of Judith. According to the parable the widow Judith saves her people by decapitating the enemy general. She does this by charming him, getting him drunk and subsequently beheading him in his tent. Caravaggio’s painting portrays the grisly murder and perfectly captures Judith’s emotions; one of heroic firmness mixed with disgust.

9) ‘Flaying of Marsyas’ Titian, c.1570-76- a scary painting that depicts a horrifying incident

One of Titian’s last works Flaying of Marsyas depicts the flaying or killing of Marsyas, a satyr. Marsyas was guilty of rashly challenging the god Apollo to a musical contest. And as he subsequently lost to the god, he was skinned alive. This artwork was inspired by Ovid’s detailed explanation of the event and hence the scene embodies exactly what took place. The piece also portrays the cruelty of the mythical gods.

Another scary and bizarre painting by Caravaggio depicts the exact moment the mythical being was executed by Perseus. Caravaggio created two versions of the painting, one is privately owned while the other is on display at the Uffizi Museum in Florence. The painting is unique because the artist used his own self-portrait in place of Medusa’s head. In this way portraying his own immunity to her terrifying gaze. Additionally, it captures the final moments of her life where she is still conscious with blood dripping from her decapitated head.

11) ‘The Judgment of Cambyses’ Gerard David, 1498- a scary painting that depicts the flaying of a corrupt judge

The Judgement of Cambyses is a scary painting that shows the graphic flaying of the corrupt Persian judge Sisamnes. The artwork is inspired by an incident that took place in Greek Historian Herodotus’ histories. The story goes that the Persian Emperor Cambyses II ordered the judge Sisamnes to be skinned alive for delivering an unjust verdict after accepting a bribe. Additionally, he ordered that the judge’s skin should be used as padding for a chair from which his successor-his son-would hear future cases. Moreover, the detail on the upper right-hand corner of the painting shows the son delivering justice in the macabre chair.