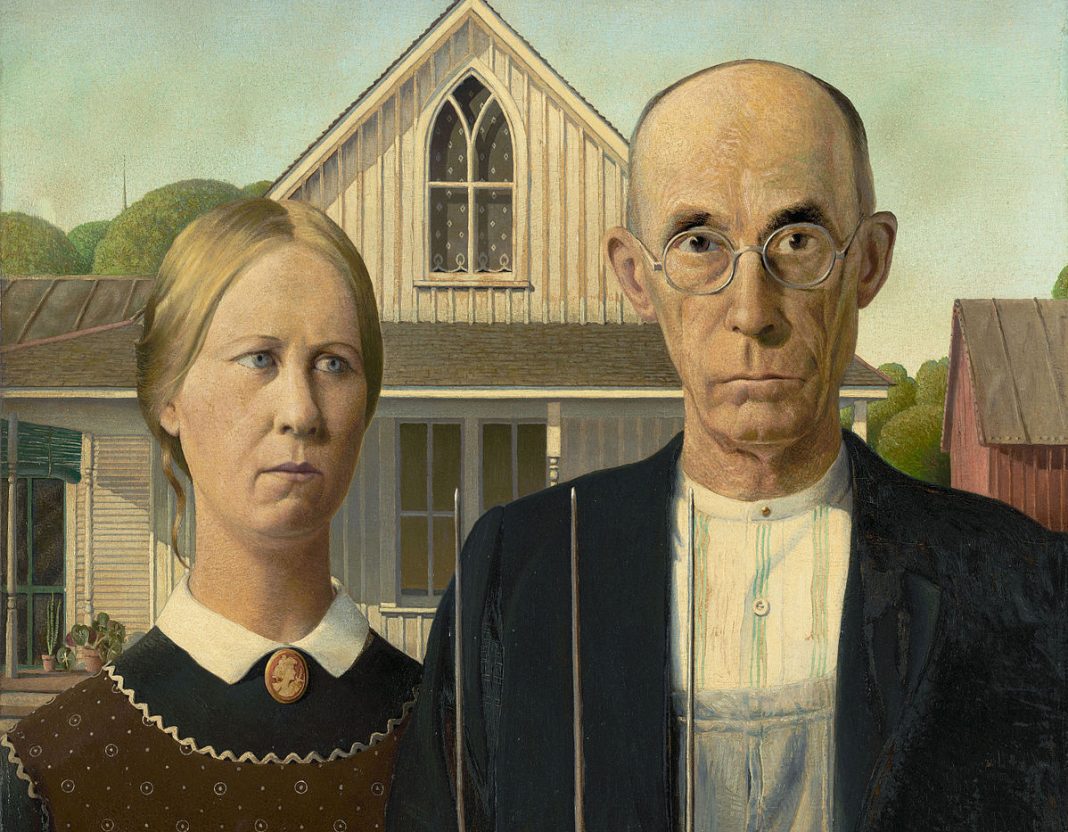 Let us take a look at the most famous portrait paintings in art history.

Without a doubt, one of the most famous portrait paintings in art history is the Mona Lisa. Painted by Leonardo Da Vinci between 1503–19, today it is displayed at the Louvre Museum, Paris. The painting is renowned for the subject’s enigmatic expression and ‘smile’. According to an early biographer, the painting is a picture of Lisa Gherardini, the real-life wife of a Florence merchant. Initially, the painting didn’t have much acclaim but its 1911 theft propelled it into fame almost overnight. After its return, the museum subsequently encased in a bulletproof case. Today the Mona Lisa has been vividly described as “the best known, the most visited, the most written about, the most sung about and the most parodied work of art in the world”.

This iconic portrait painting was exhibited publicly for the first time at the Art Institute of Chicago, winning a $300 prize and instant fame for the artist. It depicts a hard-bitten farming couple and showcases “real Americans”. Grant Wood used his sister and dentist as the subjects for the painting and dressed them up in farming attire. They are posing in front of a white gothic cottage located in the small town of Eldon in southern Iowa. At the time he was an unknown artist, but his iconic painting reached great heights of success. Its reproductions were subsequently displayed in almost every household in Iowa, plus the painting was heavily parodied in American pop culture. Today it is known as America’s Mona Lisa and is one of the most recognised paintings of the 20th century.

One of the famous artists of the Dutch Golden Age, Johannes Vermeer’s most recognised and acclaimed work is Girl With A Pearl Earring. It essentially depicts a woman dressed in exotic attire wearing a large pearl earring. What sets the painting apart from the others is that the sitter is a tronie, a Dutch term for a character or type of person. While a lady might have posed for the painting, it was not meant to portray any specific individual. Over the centuries it went by many names until it settled at its current title, one named after the prominent earring. Today the painting is on display at the Mauritshuis in Hague.

This famous portrait painting is one of the most representative works of Gustav Klimt’s Golden Phase. It’s essentially a portrait of Adele Bloch-Bauer, wife of Ferdinand Bloch-Bauer, a wealthy Jewish banker and sugar manufacturer. Additionally, Adele is the only sitter Klimt has painted twice. Also known as The Woman In Gold, in 1941 it was infamously stolen by the Nazis; who displayed it at the österreichische Galerie belvedere. Years later Adele’s niece Maria Altmann made a claim against the gallery for the return of the painting. After a lengthy seven-year legal battle, the gallery returned it to her. Altmann sold it that very same year for a whopping $135 million, which at the time was the highest price ever paid for a painting.

Jan Van Eyck was one of the most significant representatives of early Northern Renaissance art. The painting essentially depicts Italian merchant Giovanni di Nicolao Arnolfini and his wife. Also called The Arnolfini Wedding, the painting is known to be the most original and complex paintings in Western art. Its beauty and complex iconography certainly set it apart from the paintings from that era. Another notable aspect of the painting was its illusionism. Its exact symbolism has been the subject of various scholarly debates. Additionally, over the years many have come up with various theories as to the meaning behind each one of its components.

Las Dos Fridas translated as The Two Fridas is a double self-portrait by the Mexican artist Frida Kahlo. Kahlo created it after her tumultuous divorce from artist Diego Rivera. It essentially depicts two versions of the artist seated beside each other; one is wearing a white dress while the other is wearing a traditional Tehuana dress. The work has been often analysed and scholars say that the one in white is the European Frida while the other one is the Mexican Frida. The European Frida is missing a part of her heart. The Mexican Frida however possesses her heart and also holds a small portrait of Rivera which shows that he completes her heart. The painting as a whole symbolises the duality of a woman.

The Night Watch is a famous group portrait painting by Rembrandt van Rijn, one of the greatest visual artists in art history. The painting essentially depicts The Shooting Company of Frans Banning Cocq and Willem van Ruytenburch, most commonly known as The Night Watch. The painting is famous for its massive size and the use of dramatic illumination which shows a violent contrast of light of dark. Another unique aspect of the painting is that the scene has the appearance that an actual historical event is taking place thus giving the perception of motion. A fun fact about the painting is that the scene was originally depicted in daylight. However, over the years the painting has accumulated many layers of dirt and varnish which gives an impression that the scene is taking place at night.

Guiseppe Arcimboldo’s paintings consist of a rich combination of flora, fauna and various other objects. It’s even more evident in his famous portrait of Holy Roman Emperor Rudolf II. The painting essentially depicts a combination of various fruits, flowers and vegetables which come together to form the emperor’s portrait. Additionally, it’s also an intentional reference to the Roman God of seasons Vertumnus, plus the choice of the components is a reference to the emperor’s power and wealth.

One of the widely analysed works in Western art, Las Meninas is a famous group portrait painting by Diego Velázquez. The painting depicts life in court under King Philip IV of Spain. Las Meninas translates to Ladies in Waiting and its unique aspect is that it is almost akin to a snapshot as it essentially captures a moment. The painting shows Infanta Margaret Theresa, the king’s daughter surrounded by her entourage. Above the princess is a mirror depicting her parents, the king and the queen who appear to be in the position of the viewer. With Velázquez himself behind the easel, it gives an impression that he is painting the portrait of the royal couple.

Also called Arrangement in Grey and Black No. 1, it was created by the artist in 1871 when he was living in London. The painting’s subject matter is the artist’s own mother; she is wearing mourning clothes and dons a grim expression on her face. Due to the enigmatic nature of the painting, it is often called the Victorian Mona Lisa. Although the painting did not receive a positive reception in the United Kingdom, it became famous in America where it was embraced as an embodiment of morality and motherhood.