20 Key effects of World War I

World War I caused a lot of devastation and destruction. World War I originated in 1918 and lasted for over four years. During the war, the world went through major changes which had a lasting impact. The war was responsible for the overthrow of great empires, old regimes, the formation of new territories and the dissolving of the old. Subsequently, the political, economical and social effects of World War I was felt all across the globe.

Let’s take a look at the 20 key effects of World War I.

1) The collapse of four empires

One of the prominent effects of World War I was the downfall of four empires: Germany, Austria-Hungary, Russia and Turkey.

2) After World War I, the Austria-Hungary empire broke down into several independent states. These nations are Poland, Czechoslovakia, Yugoslavia, Hungary, and Austria. 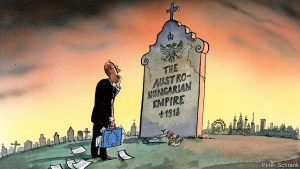 One of the major political effects of World War I was the establishment of the Weimar Republic in Germany. After the war, Kaiser Wilhelm II lost all his military support and was forcefully abdicated from the throne. Germany also experienced a civil conflict known as the German Revolution. This marked the fall of the constitutional monarchy in Germany and gave rise to a parliamentary republic. The parliamentary republic was known as the Weimar Republic.

4) Another political effect of World War I was the fall of the Ottoman Empire and the creation of the Republic of Turkey.

5) The war also caused colonial revolts in the Middle East and Southeast Asia, the war marked the end of colonialism. After the war people became more nationalistic.

6) The war was beneficial for the Bolsheviks to rise to power in Russia in 1917.

7) As a consequence of the war, a fascist government triumphed in Italy.

8) World War I had a devastating economic effect on European powers. Although it left the European countries in deep debt, the United States emerged as a leading superpower. 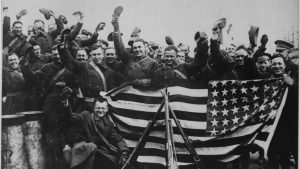 9) Before the war the U.S. was a debtor nation, but it was World War I which took it out of recession and put it into a 44-month economic boom. Thus post the war the U.S. became the leading creditor and industrial power in the world.

10) Countries started treating foreigners with suspicion and imposed trade protectionism and restricted capital flow. These practices set the stage for the Great Depression.

11) The war also caused inflation in the European nations. Germany for one experienced hyperinflation. By the end of 1918, the Deutsch mark had fallen more than 50% against American dollars.

12) The German government was printing money to pay for the war and increased the Deutschmarks in circulation from 13 billion to 60 billion. The war also increased Germany’s sovereign debt from 5 billion marks to 100 billion marks.

13) Under the Treaty of Versailles, Germany faced harsh reparations for the war and had to pay up 132 billion gold marks as financial reparations of World War I.

14) The spread of the Spanish flu

The 1918 Spanish flu affected almost a 3rd of the world’s population at the time. The large mobilisation of troops from different parts of the world caused the flu to spread faster. The influenza pandemic is another one of the deadly effects of World War I. Moreover, the epidemic caused more deaths than the war itself.

15) In the United Kingdom, the Women’s suffragette movement was a success and women over the age of 30 were allowed to vote. The main reason was that during the war women were doing the traditional ‘men’s jobs’ hence proving they were capable of voting.

New technology and development in chemical warfare were other key effects of World War I. Although, the participating countries used primitive communication methods like carrier pigeons, the technology during the war was ever-evolving. The war made use of fighter aircraft, submarines and tanks. Additionally, the weapons used during the war also evolved. The nations made use of modern artillery, flame throwers and poison gas. This became modern warfare.

17) The social effects of World War I

World War I had a terrible social effect on the world. The soldiers who fought in the war were called the ‘Lost Generation’. Additionally, the participating countries of World War I felt a collective trauma. At the beginning of the 20th century, the European people looked forward to a future of prosperity in Europe. However, World War I changed that and it was a war that few wanted or expected.

18) The League of Nations

World War I caused the deaths of 9 million military personnel and 10 million civilians and left at least 7 million people permanently disabled. The devastation and destruction caused by the war heralded the birth of an organisation called the League of Nations. The League of Nations’ sole purpose is the maintenance of World Peace. It was formed on January 10 1920, following the Paris Peace Conference.

19) Mental health and World War I

World War I caused a lot of mental stress on the soldiers who went to war. Many of them developed Post Traumatic Stress Disorder (PTSD) and the term Shellshocked was used to describe them. Shellshock caused them to panic, become helpless and develop an inability to reason, sleep or talk.

The U.S. entered World War I only briefly but that decision made quite an impact on the outcome of the war. Read  Why did the U.S. enter World War I? – Reasons | Key facts | Brief Overview

Previous articleLionel Royce was an actor in Nazi Germany who lost his job for being a Jew. He went to the Alps, grew a beard and bathed in hydrogen to dye all his hair. Nazis praised him as living proof of superior Aryan blood when he returned to the stage as a successful self-taught actor.
Next articleThe House of Plantagenet- Key facts and Brief Overview