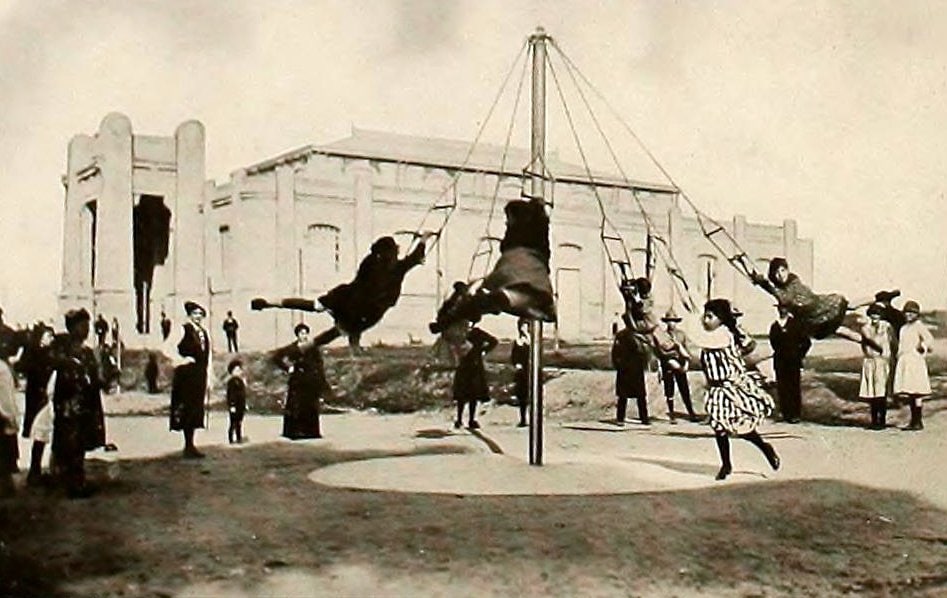 Playgrounds have certainly evolved from back in the day. Compared to today’s ‘safe’ playgrounds, the ones in history were pretty ‘dangerous’. According to reports, 147 children died from playing on playgrounds between 1990-2000 and over 75% of children suffered from non-fatal injuries. However, people justified that these ‘dangerous playgrounds’ were instrumental in making children overcome their fear and anxiety.

Let us look at the Top 15 Dangerous Playgrounds- history in pictures.

1) The first on our list of dangerous playgrounds was the one on Harriet Island, St. Paul, Minnesota. As seen in the 1905 picture, the young girls had to swing really high and climb up the tall ropes.

3) Who doesn’t love slides!? But these particular old slides were made of metal and hence during summers they would get really hot. Temperatures on the slides even shot up to 150 degrees! I bet the hot metal caused some serious burns.

4) Playgrounds have some really fun equipment. But check out the playground equipment in history, instead of being fun they look like they’ll cause some serious harm.

5) Jungle gyms are fun, but not with so many people on it. This playground in the Bronx shows exactly what a jungle gym should NOT look like.

6) Described as a ‘giant stride for school playgrounds’ this playground equipment certainly looks dangerous. Any incorrect coordination could have caused some serious injuries to the children.

7) The below picture of the Hiawatha Playground shows how children climbed up really high and descended via two wooden poles known as ‘sliding poles’ or ‘incline poles’.

8) This playground in Columbus Avenue, Boston shows a close-up of the dangerous ‘sliding poles’.

9) The below picture depicts two children swinging high on single swings, with or without parental supervision this activity certainly seems unsafe.

10) The below playground in New York shows children swinging round in circles while holding on to ropes.

11) Below picture depicts children playing on a roundabout. One might think these are safe, but they weren’t! According to reports, these were especially dangerous to little children as the speed of the equipment was in the hands of the older children.

12) Below pictured is another dangerous playground. Here children ran, held onto the rope and swung fast.

13) Below are other hazardous types of vintage equipment popular in playing areas for kids.

Enjoyed the above article? You may also enjoy Job Hunting in the 1930s- in pictures