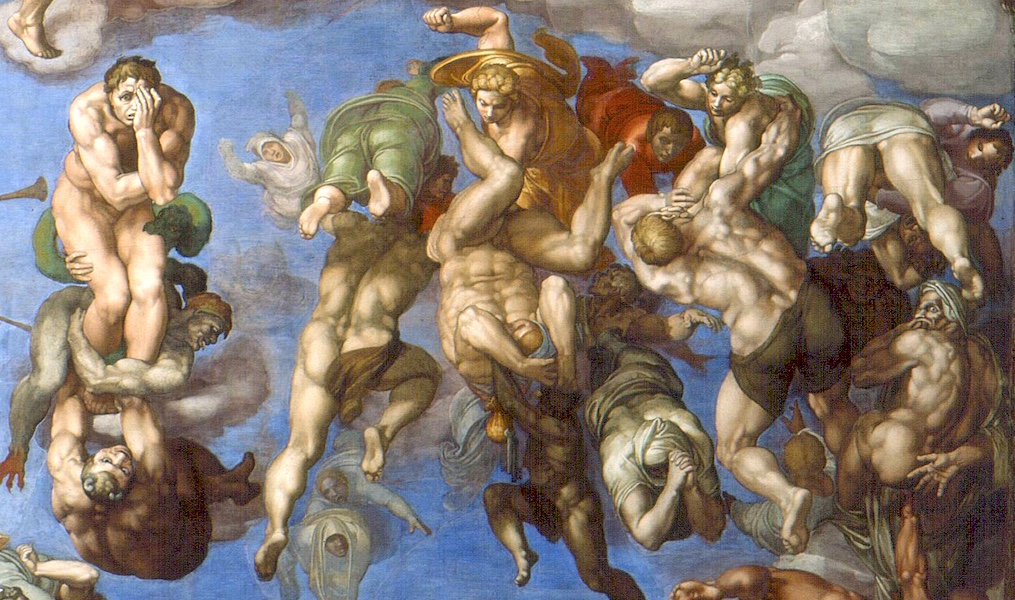 Someone once said, “Art should comfort the disturbed and disturb the comfortable” and the following famous controversial art pieces justify this. The artists featured in this list repeatedly broke the boundaries of art and were heavily criticised. However, today most of these artworks are recognised as timeless masterpieces.

Let’s take a look at the 10 famous controversial art pieces of all time.

The Last Judgement is a controversial art fresco painted by Italian Renaissance painter Michelangelo. It covers the altar wall of the Sistine Chapel in the Apostolic Palace, Vatican City. It portrays the Second Coming of Christ and the eternal judgement of God on all humankind. Michelangelo worked on it from 1536 to 1541, and once completed it was met with numerous criticisms, especially from the counter-reformation Catholic Church. One of the primary reasons for criticism was that all the figures in the fresco were painted nude, and this concern continued even after the death of the artist. In fact, Italian painter Daniele da Volterra was hired to cover up the nudity. He did so by adding leaves and loincloths to the figures.

The Fountain is essentially a porcelain urinal signed ‘R. Mutt’. In 1917, Marcel Duchamp anonymously submitted this art piece to the Society of Independent Artists, an institution that accepted any artwork as long as the fees were paid. Although society accepted the art piece it was not displayed as it was indecent. However, the art journal ‘The Blind Man’ defended the art piece and published it as photographed by Alfred Stieglitz. This was the last time the original was seen after which it was lost. Since then at least 16 replicas have been made of the piece. Today, the ‘Fountain’ remains one of the famous controversial art pieces of the 20th century.

The Dinner Party is an installation art piece by artist Judy Chicago. And it is regarded as the first epic feminist artwork. It is essentially a banquet table that features 39 mythical and historical famous women. Each place setting includes a hand-painted china plate akin to a stylized vulva. Due to its anatomical imagery, the art piece has been heavily criticised; with people labelling it ‘vulgar’ and ‘demeaning to women’. Another criticism was the lack of other ethnicities at the table. Despite the criticisms, the piece is one of the eminent feminist arts and is displayed at the Brooklyn Museum.

Often critiqued as the ‘object of blasphemy’, Piss Christ by Andres Serrano is a very controversial art piece. The piece is essentially a photograph of a small plastic crucifix submerged inside a glass jar of the artist’s urine. Although it didn’t receive any criticism during its initial exhibitions, things changed when it was exhibited in 1989. The piece consequently put the media into a frenzy and received various criticisms. Some calling it blasphemous and some calling it obscene. Things came to head in April 2011 when the piece was up for display at the Collection Lambert art museum, where vandals managed to give it irreparable damage.

Renée Cox’s controversial art piece is an imitation of Leonardo Da Vinci’s painting of the Last Supper. It consists of 5 panels depicting 11 black men, a white Judas and a naked black woman as Christ (which is the artist’s self-portrait). Her iconoclastic depiction of Christ garnered a lot of criticism; especially from the Catholic League. Additionally, New York City’s Mayor Rudy Giuliani labelled the artwork as ‘obscene’. he also asked for the formation of a decency commission that would review such art and prevent them from being displayed.

An artwork that has always been associated with controversy is ‘The Holy Virgin Mary’ by Chris Ofili. The art depicts a black woman as Virgin Mary who is surrounded by anatomical imagery. However, its biggest object of criticism is the elephant dung which forms one bared breast. The painting was first displayed in 1999 at the Brooklyn Museum’s show of Young British Artists titled ‘Sensation’. Since then it has received a maelstrom of criticism with then-New York City’s Mayor Giuliani advocating its removal and threatening to cut off all subsidies to the museum. However, the city leaders refused to budge and the work remained on the view. Since then it has even been vandalised a few times and today, the painting is displayed at the Museum of Modern Art in New York City.

Tilted Arc was a controversial public installation by Richard Serra. It was installed at the Foley Federal Plaza in Manhattan from 1981 to 1989. The arc was essentially a 120-foot-long, 12-foot-high solid, unfinished plate of rust-covered corten steel. The artist designed it in such a way that it made people stop and take in their surroundings. However, after its installation people considered it oppressive and ugly. Subsequently, 15 per cent of the population of the neighbourhood signed a petition to have it removed. And the public outrage just grew over time. As a result, a trial was held in 1985 to remove the Tilted Arc. A ruling was decreed in its favour and after 4 years, in 1989 the sculpture was removed.

This controversial art piece was commissioned for a chapel in the church of Santa Maria Della Scala in Rome. Caravaggio was renowned for his paintings which realistically depicted human emotions. As seen in the painting, the artist depicted Mary realistically with only a thin halo to portray the event. Traditionally, the event would have featured a choir of angels to give a sense of divinity, however, the painting is a complete contrast from that style. The church ultimately rejected the piece either for its stark realism or for the fact that he used a famous prostitute to pose as Mary.

Labelled as a ‘shocking’ piece of art, The Gross Clinic has received its fair share of controversy. The painting depicts Dr Samuel D. Gross overseeing a surgical operation and lecturing to a class of medical students. It was submitted to the 1876 Centennial Exposition but was rejected due to its graphic nature. Additionally, art critics criticised it for its gruesome content and melodrama(the hysterical woman covering her eyes). However, today the painting is recognised as a homage to science and is one of the great masterpieces of its time.

When the artist installed the art piece at the 1999 Turner Prize Exhibition, it received intense negative feedback. The art piece is essentially an unmade bed which the artist used when she was suffering from depression after a bad breakup. Objects such as crumpled tissues, cigarettes, empty vodka bottles and condoms surround the piece. However, due to its raw nature, it caused great public outrage; with various critic labelling her work as crude, primitive, uninteresting, ill-informed and objectionable.

Enjoyed the above article? You may also enjoy 12 Clever War Propaganda Posters

Previous article12 Evil Gods you should steer clear of!
Next articleThe controversial life of Charles Saatchi