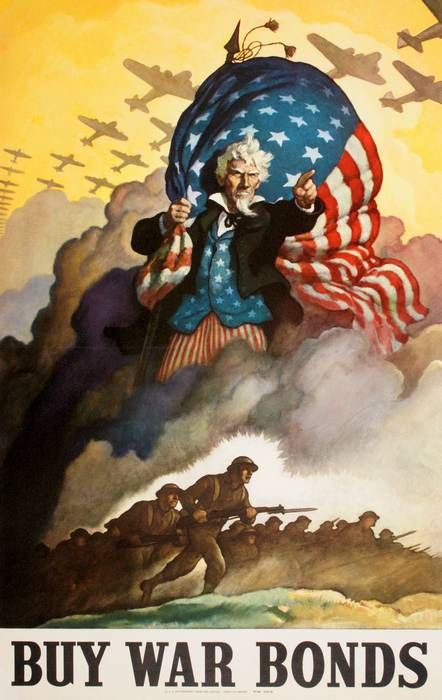 Just like how the media works today, war propaganda posters of the past were a powerful mode of communication and persuasion. They were made to influence the attitude of society towards a specific cause. Even though some of them were made to manipulate the human mind, there is no denying that illustrators and propagandists did a great job at it. Although we are not supporting any of these movements, there is no doubt that the below list consists of the most clever war propaganda posters in history.

1. William Orpen was appointed to paint a war distressed France

William Orpen went to the Slade School in London along with renowned painters, Augustus John and Wyndham Lewis. While studying, he produced some of his school’s best works and was famous for his portraits. One of Orpen’s friends allowed him to paint the pictures of several senior military officials like Churchill and Lord Derby. The government’s War propaganda recruited him to the western front. Here, he painted images of a war distressed France in 1917. He produced his most famous piece, “Dead Germans in a Trench” there.

2. How could anyone look away when war propaganda posters say “I Want You”?

One of the most iconic war propaganda posters of all time worldwide is the “I Want You” poster. It first appeared on Leslie Weekly’s cover on July 6, 1916. This was the time when America entered World War I. The poster was released with a title saying, ‘What Are You Doing for Preparedness?’ It featured Uncle Sam pointing at the readers and compelling them to take action.

3. British illustrators created a sense of pride to encourage people to enlist themselves

Savile Lumley, a British illustrator, made this poster. During World War I, it was used to push men in families to enlist themselves in the defence force. The illustration aimed to instil a sense of pride in the viewers and persuade sons and husbands to serve the country in the time of war.

4. The master of all war propaganda posters was Hans Schweitzer

In the 1930s, all Nazi war propaganda posters ran in full swing under the leadership of Adolf Hitler. They made great efforts to persuade the Germans into joining the arms and spreading lies about the Nazis. One of the most famous artists behind the success of Nazi propaganda was Hans Schweitzer. Also called “Mjolnir”, Hans created this poster, showing the typical pro-Nazi theme. It displays the German troop’s strength. It also features a Sturmabteilung man standing beside a soldier and the text says, “The guarantee of German military strength!”

5. Mjolnir very cleverly made it seem that Hitler was a saviour. Ironical, isn’t it?

Another poster created by Mjolnir reads, “Our Last Hope: Hitler.” This one came into use during the 1932 presidential elections of Germany. This was when the country suffered from the Great Depression. Nazi propagandists aimed at targeting the unemployed Germans and barely got three meals a day. Through this poster, Hitler was portrayed as a saviour and that the viewers could choose his path for a better quality of life.

6. Hans blamed the Jews for all the suffering in Germany in his poster

Another poster created by Hans targeted the wrongdoings of the Jews. The propagandists blamed them for the country’s war and all other problems. Several posters read, “He is guilty for the war.” This was used as Hitler’s key message and started a campaign of terror against the Jews and ethnic cleansing. Mjolnir drove the entire campaign for the Nazis, from almost start to end. Today, we know how much the media can mould public opinion. It is safe to say that Hans developed the Germans’ thinking through his brilliant designs. There is no doubt that these propaganda posters were in pro of one of the biggest genocides in history. However, while speaking about war propaganda posters, they are worth mentioning as they were both extremely powerful and effective at the time.

7. This poster instils a sense of revolution even today

This image took inspiration from the popular click by Alberto Korda. Jim Fitzpatrick created it and it surfaced around during the war protests in Vietnam. It was also in 1960 as part of the Paris student riots. Almost every viewer who sees this poster sees it is as revolutionary and inspiring.

8. Hans created one of the dirtiest, yet powerful war propaganda posters using children

Several war propaganda posters in Nazi Germany persuaded people to invest in war bonds. It was incredibly successful; look below for an example. In this poster, three children are seen under the shadow of a Nazi symbol and the text reads, ‘don’t let that shadow touch them, buy war bonds’. It implies that your family may be harmed if you don’t support the country financially. The illustrators cleverly played with children, which is every family’s biggest weakness.

Created during WWII in Britain, this war propaganda poster displays several types of citizens coming together at the time of need. They disregarded different races and castes of society and conveyed an idea of unity in helping one’s country.

10. One of the war propaganda posters of WW II discouraged sharing information

This poster, made during WW II, warned people about speaking about the war. It dissuaded citizens from sharing information. This poster created during WWII, aimed at discouraging people from revealing the US Navy’s important information to spies. The poster shows a floating man in the water and reads a message, “Someone Talked”.

Several war propaganda posters aimed at encouraging women to join the armed forces. Such as the one below, which speaks of women entering the defence ‘for themselves and their country.’ You can see strong and stoic women looking straight ahead, at the country’s future, or that of their families.

This Nazi propaganda looked down upon the United States citizens as domineering and portrayed their ‘negative’ characteristics. They referred to them as racist and money-grubbing and even encouraged the Germans to share the same view about the Americans.

Now that you know of some brilliant war propaganda posters, check out the most famous LGTQ war heroes!

Previous article5 Famous Native American Leaders In History
Next article6 Bizarre Events In History that will blow your mind!