11 Bizarre Facts About Carl Tanzler- The man who loved a corpse. 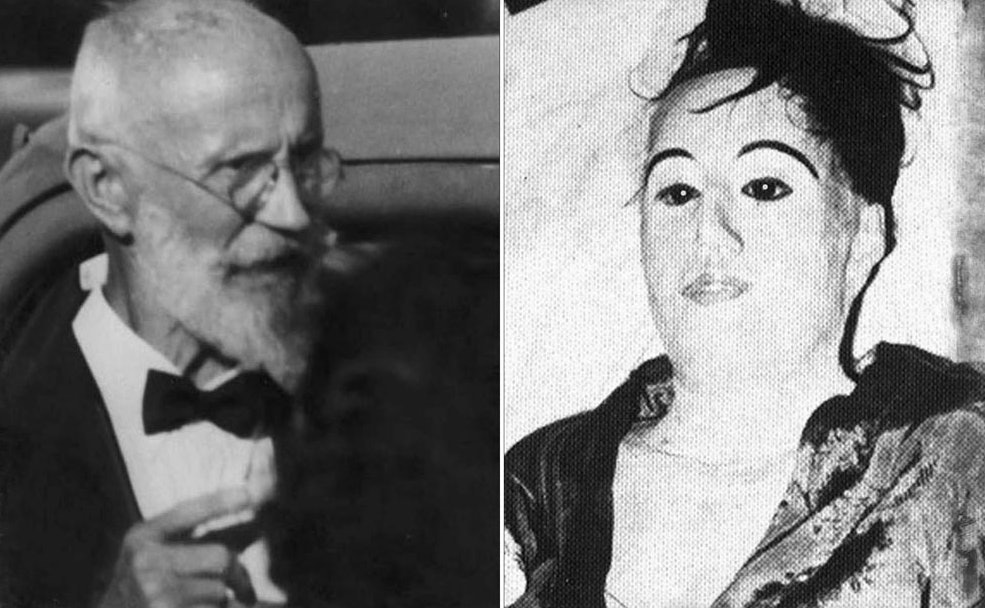 Carl Tanzler is a man famous for sleeping with the corpse of Elena De Hoyos. Yes, you read that right!

Carl was a German-born radiographer and a self-professed medical practitioner. He became “obsessed” with one of his patients and this obsession led him to do some bizarre things. Let’s find out more about this man by reading 11 Bizarre Facts about Carl Tanzler- The man who loved a corpse. 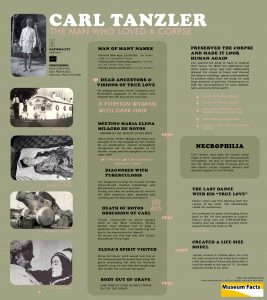 1) Carl Tanzler was a man of many names.

The first bizarre fact about Carl Tanzler (other than the fact that he fell in love with the corpse of his patient Elena De Hoyos) is that he went by many names. On his German Marriage Certificate, his name reads as Georg Karl Tänzle. On his United States citizenship papers, it reads as Carl Tanzler von Cosel and on his Florida death certificate, it is Carl Tanzler. Additionally, a few of his hospital records are signed as Carl Tanzler.

2) Plagued by visions of his “true love”.

During his childhood and travels in Genoa, Italy, Tanzler claims his dead ancestor visited him. His alleged ancestor Anna Constantia von Brockdorff appeared in his visions and showed him the face of his true love, a foreign woman with dark hair.

On April 22 1930, while working at the Marine Hospital in Key West, Carl Tanzler finally met his “true love”. A local Cuban- American woman by the name of Maria Elena “Helen” Milagro de Hoyos was brought into the hospital by her mother for an examination. Tanzler immediately recognized her as the woman of his dreams. She had dark hair, was beautiful and was a foreigner. Additionally, Hoyos was known as the beauty of Key West. Hoyos was the daughter of a local cigar maker and at the time was legally married to Luis Mesa.

4) Carl professed his love with gifts and jewellery.

Carl was smitten since he set eyes on Hoyos. Nobody knew the sinister extent of his obsession. After an examination, Hoyos was diagnosed with the deadly disease Tuberculosis and was on the verge of dying. Carl immediately stepped in to help her recover, he had self-professed medical knowledge and attempted to treat her at home with various medicines along with x-ray and electrical equipment.

During this time, he professed his love for her with numerous gifts, jewellery and clothing but his love was unrequited.

Tanzler was determined to nurse Elena De Hoyos back to health but alas she succumbed to her illness on October 25, 1931. After the permission of her family, Tanzler constructed an above-ground tomb at Key West cemetery in her memory. Elena’s mother even allowed Carl to keep a memento of her hair. Another bizarre fact was that Carl made only one key to the mausoleum and it was solely for himself.

Little did the family know that Carl would use that key and visit Elena’s mausoleum every night.

Carl Tanzler claimed that Elena De Hoyos’ spirit would visit him at the cemetery and he would then sit by her grave serenading her with his favourite Spanish song. Moreover, he said that she would urge him to take her out from her grave.

7) The taking of the body of Elena De Hoyos.

One evening in April 1933, Carl finally took Elena’s corpse out of the grave. He then transported the body back to his home using a toy wagon.

8) Carl Tanzler preserved the decomposed corpse and made her seem “human” again.

As expected with time the body of Elena De Hoyos was decomposing. Carl kept the body in a makeshift laboratory in an old aeroplane and did everything in his power to preserve it. First, he put together the corpse’s bones with music wires, then he attached glass eyes into the sockets. As the skin of the body decomposed, he replaced it with a cloth soaked in Plaster of Paris and wax. Carl wanted the body to have its original form hence he filled the abdominal and chest cavity using rags. He then made a wig for her using the same hair that Elena’s mother had given him. Carl additionally dressed the corpse in finery and dressed the body in stockings, gloves and jewellery. To prevent odour from the body, he used large amounts of perfume. Furthermore, to stall the decomposition he used disinfectants and preserving agents.

9) Carl Tanzler slept with the corpse of Elena De Hoyos.

The most bizarre and disturbing fact on our list is that Carl Tanzler slept with the corpse every night in their “marital bed“ and practised necrophilia. He was so obsessed that he did not even mind the smell of decay. Furthermore, he and Elena’s corpse enjoyed dinners and danced together at the fireside.

There were lots of rumours that Carl had a new love interest in his life who wasn’t human and was in fact the dead body of Elena De Hoyos. To confirm these rumours Elena’s sister Florinda went to confront the doctor. She peeped into his living room window and to her horror saw him dancing with the corpse of her sister. She immediately called the authorities.

After the authorities discovered the body, it was examined and put up on display and more than 6,800 people came to view the body. Eventually, Elena’s corpse was returned to her family and they buried her in Key West cemetery in an unmarked grave.

Carl Tanzler was deemed unfit to stand trial and soon was released. During the trial, he confessed his plans of bringing Elena back to life. He had planned to launch Elena’s body into the stratosphere, hoping that the radiation present there would restore her back to life.

11) His obsession continued until his death.

Tanzler moved to Florida after the trial and his obsession did not stop there. He used a mould of her head and created a life-size model of Elena and lived with it until his death at the age of 75 on July 3, 1952. It has been reported that he died with the model in his arms. Additionally, many say that he died with the real body of Elena and that Tanzler had the bodies switched.

Previous article10 Crazy Rulers In History and their antics
Next articleAbigail Folger- The unsung victim of the Tate Murders.