9 Of Egypt’s Most Famous Historical Landmarks 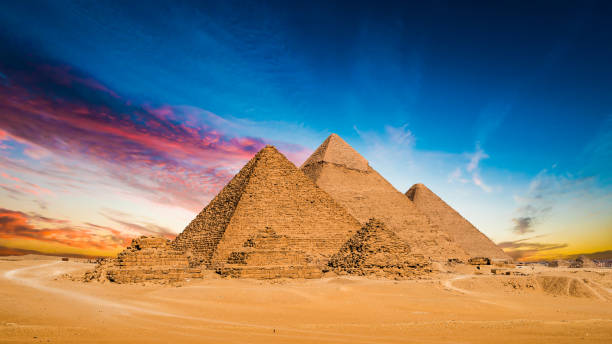 Egypt, home to the ancient Pharaohs, is a magnificent destination made of tombs and temples that leave visitors in awe. It consists of some of the world’s more treasured historical pieces, many of which are yet to be discovered. Join us on a journey to explore some of the most famous landmarks in Egypt.

Read about 9 of Egypt’s Most Famous Historical Landmarks.

One of the most famous landmarks in Egypt is the Pyramids of Giza. They are the last surviving members of the ancient world’s Seven Wonders. They are one of the most world-renowned historical landmarks. The Giza’s pyramids have the tombs of several strong Pharaohs and a mysterious Sphinx guards them.

With many conspiracy theories built around these, archaeologists don’t know how they stayed for centuries. Although the kings are no more, their memorials are still grand as ever. Having stood the test of time, the Pyramids of Giza should not be missed.

2. Luxor’s Karnak Temple and the Valley of the Kings

Other famous landmarks in Egypt are the Karnak Temple and the Valley of the Kings. The town of Luxor, alongside the Nile in Upper Egypt, has a lot to offer to tourists; including the Memorial Temple of Hatshepsut. According to historians, this is ancient Thebes. It was the base of the pharaohs of the New Kingdom.

Its two banks are contrasting; the East bank is famous for its souk and the West famous for its temples and tombs. In fact, it is the largest open-air museum in the world. Luxor continues to fascinate archaeologists and historians because of its mystical tombs and colossal temples.

Cairo’s narrow streets are full of madrassas(Islamic centres for education), mosques and monuments. Made between the Fatimid to the Mameluke eras, they are a must-visit.

Surrounding the markets, which is home to exotic perfumes, spices and textiles, are the Islamic empires. Preserved over centuries, they show magnificent styles of architecture. You could visit Al-Azhar Mosque and Sultan Hassan Mosque to view a wealth of history. Check out some cool facts about ancient Egyptians.

Although Egypt has hundreds of temples, Abu Simbel stands out. Ramses II’s great temple has beautiful statues guarding it. The interior is grand, with wall paintings. Abu Simbel is also very popular because its relocation happened in the 1960s! Fearing that the rising Nile would submerge it, the whole temple was shifted to another location. This UNESCO operation was massive and took four years to complete.

The Egyptian Museum at Cairo is one of the famous landmarks in Egypt that takes you on a tour of the Pharaonic world. It is also one of the world’s best museum collections. The mansion offers some dazzling pieces like the golden glory of King Tutankhamen and some royal mummies that will fascinate you. Every corner you look, you will find something that surprises you.

The old Abydos town would be overlooked if it wasn’t for its incredible temple. The Temple of Osiris is one of Egypt’s most fascinating displays. The art here consists of hieroglyphics and detailed paintings. One could spend hours admiring the sights and beauty.

Who said all things mystical had to be on land? Some are found deep inside as well. The Red Sea puts you on a journey to a different world. With shipwrecks around the Gulf of Gubal and Gulf of Aqaba, this underwater visit will take your breath away. Out of all the wrecks, the most famous one is the Thistlegorm. It was a WW II cargo ship of the English. The carrier was on a journey to resupply British troops when the Germans bombed it in 1941.

Today, the site is considered one of the five best wreck dives globally because of what one can see underneath, from ships to cars to motorbikes.

St. Catherine’s is one of the oldest monasteries in the world. This mighty landmark stands below Mount Sinai. Legend says that Moses received the Ten Commandments here. This desert monastery has a great collection of religious iconography, manuscripts and art. It has a burning bush as well.

Most likely, you must have heard of Giza’s Pyramids, but not many people are aware that Egypt is home to several other pyramids as well.

The last in our list of famous landmarks in Egypt is the Saqqara, a necropolis of the Old Kingdom. It showcases the skills of ancient Egyptians. By visiting the Step Pyramid, Bent Pyramid, and Red Pyramid, you will know how they improved their architectural knowledge to create such landmarks. These pyramids are home to various court administrators’ tombs.

Enjoyed reading about the famous landmarks in Egypt? You may also enjoy Famous medieval buildings and their history