Who was Agnés Sorel? She was the Chief Mistress of King VII of France. Here are 5 incredible facts about her life.

1) Agnés Sorel was twenty years old when she was introduced to the French court.

Agnés Sorel was twenty years old when she was introduced to the French court. She entranced King Charles VIII of France and quickly became his favourite mistress, giving her both a strong position of influence over the King and earning her a multitude of enemies within the French court. Charles gave her wealth, castles, and lands- treating her as if she were a Queen.

2) She had her gowns tailored!

She had her gowns tailored to expose her favorite breast (yes, fully exposed). More specifically, her left breast. This fashion risk generated lots of scandal at court. It even got to a point where the archbishop of Reims counseled the King against “front openings through which one sees the teats, nipples, and breasts of women”.

Agnés Sorel is sometimes called “Dame de Beauté” from her estate at Beanté-sur-Marne, which was given to her by the French King. She was also given the Château de Loches as her private residence, which was the same location that King Charles had been persuaded by Joan of Arc to be crowned King of France.

While pregnant with her fourth child, she traveled to Chinon to join Charles on his campaign and suddenly became ill. She died at age 28 of what was thought to be dysentery. Further investigation into her remains revealed that the cause of death was mercury poisoning. 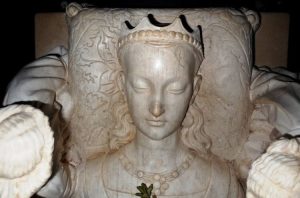 Inspired by her Story? Here is a story about how these Ten women right activists who changed the world.

Previous article5 badass women pirates who showed the men how to handle the high seas (Open list) (0 submissions)
Next article17 Guggenheim Museum Facts that will amaze you!