Winston Churchill held the office of the Prime Minister of the United Kingdom from 1940 to 1945 and again from 1951 to 1955. We commemorate him for his legendary speeches and he is a celebrated figure in politics. Churchill is best remembered for his role in World War II where he successfully led Britain to victory. Even though he is celebrated as a British Icon, did you know the man was partly American and had an intense dislike towards Gandhi? We have compiled a list of such interesting and fun facts about Winston Churchill.

1) He had a speech impediment.

The first interesting fact about Winston Churchill is that he had a speech impediment. He suffered from a lisp and pronounced “s” as “sh” and even went to see a doctor in hopes of a cure. However, he did not let this problem hinder him and persevered to overcome it by regularly reciting phrases like “The Spanish Ships I cannot see for they are not in sight”.

What is so inspiring about the man is that despite the speech impediment, he went on to become one of the greatest orators in history.

2) He was an ardent painter.

Although Churchill started painting at the age of 40, it didn’t take him long to master the skill. He has produced over 500 paintings. Depression and anxiety overwhelmed him after the failure of his Dardanelles Campaign. His sister-in-law then encouraged him to paint. He took it up and said it rescued him. His friend and fellow artist Paul Maze also encouraged him to paint and they would become lifelong painting companions.

Additionally, he considered himself as an amateur painter, hence he submitted his paintings to exhibitions using pseudonyms such as “David Winter” and “Charles Morin”. He only revealed his identity when two of his artworks were selected and accepted in an exhibition at London’s Royal Academy of Art. In 1948, he received the title of Honorary Academician Extraordinary by the Royal Academy.

In his essay “Painting as a pastime”. Churchill writes that once he gets to heaven, he will spend most of his first million years painting and get to the bottom of the subject.

Another interesting and fun fact about Winston Churchill is that he disliked Gandhi a lot. He is no stranger to controversies and his views on Indians are quite clear. Senior Cabinet member Leo Amery recounted how Churchill once called Indians a beastly race with a beastly religion.

Gandhi’s 1942 quit India movement thoroughly displeased Churchill. He insisted that Gandhi was acting on behalf of Axis powers. In another instance when Gandhi held a 3 week fast in prison, Churchill had suspicions about it as well. He was convinced he was using energy supplements and not fasting. He even wrote to the Viceroy to confirm his suspicions if Gandhi was taking glucose with his water. The viceroy responded by saying that he was not.

In 1951, Churchill was once again a key figure of controversy when he released a portion of his war memoirs called “Hinge of Fate”. In this, he claimed that Gandhi used glucose water as a supplement in the early days of his fast. Consequently, there was a huge outcry in India and Gandhi’s secretary even wrote angry letters to Churchill. Additionally, the Indian Press was also furious by his allegations and released articles criticising him.

Another controversy surrounding the former UK Prime Minister is that he worsened the Bengal Famine. In 1943, India was still under British Raj and the northeastern region of Bengal was facing a devastating famine at that time. The deadly Famine took the lives of around 3 million people. Churchill allegedly ignored the Famine and didn’t provide wheat to the Famine stricken region. When people raised an issue, he simply viewed it as a distraction. Additionally, his excuse was that he was occupied with battling Germany and simply couldn’t be bothered by it.

Although Churchill eventually intervened, it was his lack of prioritization of the issue, which had made matters worse. 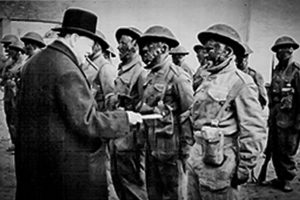 An interesting fact about Winston Churchill is that he represented two oil companies, Royal Dutch Shell and Burmah Anglo-Persian Oil Company for their application to the government for a merger. For this, he took an amount of £5,000 from them. By modern British political standards, this payment of 1923 would have been condemned and criticized.

Additionally, Churchill accepted all sorts of “offerings” from time to time. At that time, such payments were not looked into with scrutiny and the appropriate rules and laws were not in place.

6) Winston Churchill suffered from mental illness but did not let it hold him back.

Depression often plagued Churchill. Referring to prolonged fits of depression as the “black dog”. Additionally, he allegedly suffered from bipolar disorder. He showed signs like being highly energetic one moment and having very low energy the next and was even suicidal and had trouble concentrating.

However, he did not let his mental illness affect him and led a purposeful and successful life. 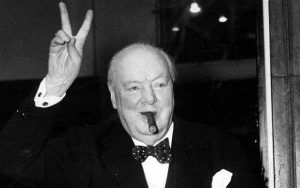 7) He was a heavy smoker since his youth.

Another interesting and fun fact about Winston Churchill is that he was a heavy smoker. His habit started when he was in school when he started smoking cigarettes with his schoolmates. This displeased his mother. She even resorted to bribery to make him stop, promising him a pony and a pistol if he gave up smoking altogether. Being the clever and tactical man, he negotiated with his mother and instead of giving up smoking for life, he gave it up for six months. Surprisingly, although he smoked cigarettes throughout his teenage years, he grew to dislike them as an adult.

His taste for cigars developed when he was serving in Cuba.

He went on to smoke as many as 10 a day! He smoked them during meals, work and meetings. His love for cigars was such that he created a special storage compartment for them. This compartment could hold around 4000 cigars.

Additionally, Winston Churchill even created a special oxygen mask that allowed him to smoke during the flights he made. 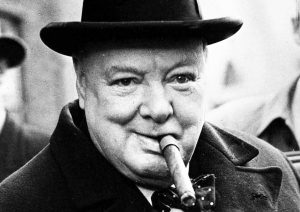 8) A fun fact about Winston Churchill is that he once scaled a wall to escape from the enemy.

Winston Churchill once served as a correspondent of war and a military officer. Such a dual role was then permitted in India, Sudan and South Africa. When he arrived in South Africa in 1899, his train was ambushed by Boers ( Dutch settlers who were against the British ). Churchill was captured along with his colleagues. But he didn’t allow them to keep him a prisoner for long. Later that night he scaled the walls of the encampment and escaped with no destination in mind. Luckily, he came across the house of an old British miner who helped him hide in a mineshaft. The miner then sent him on a wool-filled train to Mozambique. On arrival, he booked a ship back to South Africa. This daring escapade further fuelled his fame.

The last interesting fact about Winston Churchill is that he was partly American by birth. His mother Jennie was the daughter of a wealthy American businessman and married Randolph Churchill. His parents were active both politically and socially and as a result, weren’t really present during his childhood.

Previous articleThe Met- 11 Reasons why it is one of the best museums in the world
Next articleJohn F. Kennedy claimed he did not know about the Great depression and only learnt about it in textbooks while attending Harvard. Kennedy had a privileged upbringing and went to elite schools and was brought up with servants. So he was never affected by the Great Depression.