The Viking Diet- What did the Vikings eat? 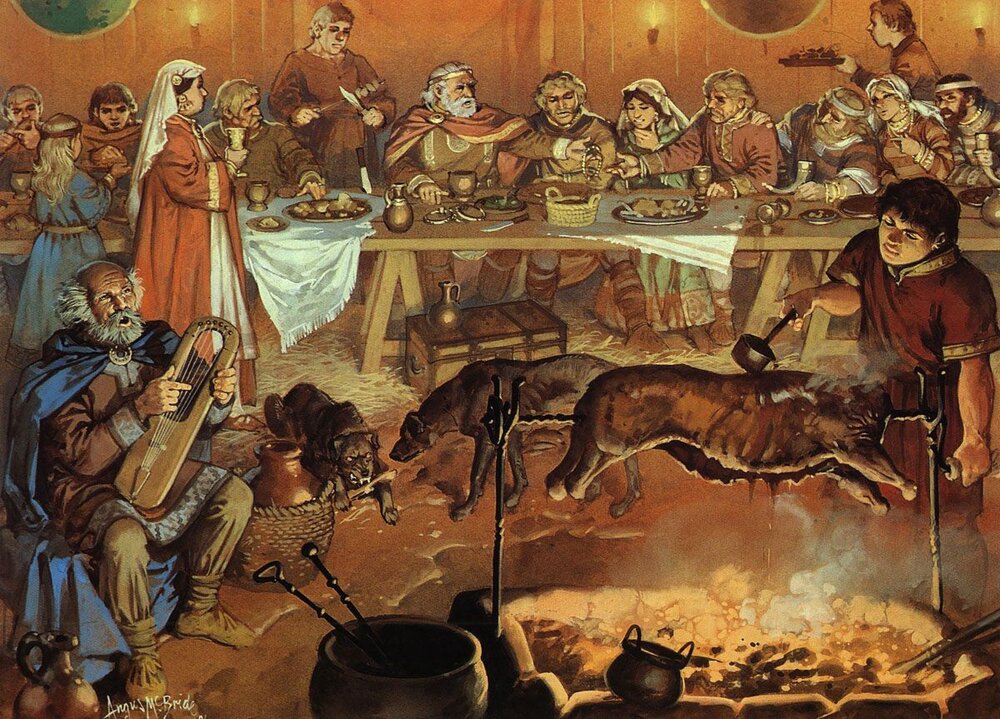 The Vikings were Norse people from Southern Scandinavia who thrived from the 8th century to the 11th century. They were seafaring people who raided, pirated and traded throughout Europe. The era during which they thrived was called the ‘Viking age’. Additionally, the Vikings were strong and mighty people and to battle the seas and conquer lands they must have had a fulfilling diet. The Viking diet was rich in protein and was composed of fresh fruits and vegetables. They made the best use of the available resources to provide them with the nutrition they required.

Let’s read about The Viking Diet- What did the Vikings eat?

1) Unlike today’s ‘3 meals a day’ standard, the Vikings ate only two meals a day. 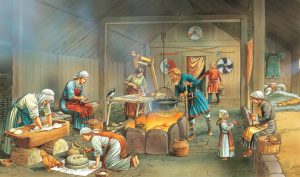 2) The 2 meals a day were known as ‘dagmal’ and ‘nattmal’ which translates to day meal and night meal.

3) Both the day meal and the night meal had a lot in common, as due to the frigid temperatures there wasn’t much variety in the food. 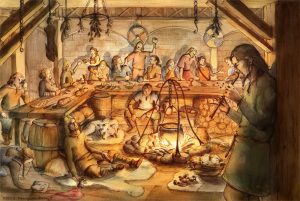 The Viking diet consisted of a lot of fresh food. For nattmal, they typically had stewed fish or fish or meat with vegetables. This was washed down with mead(an alcoholic beverage made using honey) and un-hopped ale. 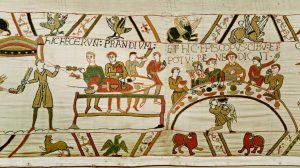 Dagmal was essentially their breakfast. This consisted of leftover stew from their nattmal eaten with homemade rye bread or fruit. The children would typically have porridge, fruits such as cloudberries or bread with buttermilk.

7) The Vikings held feasts to celebrate festivals such as Jól or Mabon and on occasions such as childbirth and weddings. During these feasts, families of higher status would lay out a variety of dishes.

8) The Viking diet during feasts

The Vikings went all out during these feasts. The feast typically consisted of rich stews, roasted and boiled meats, served along with buttered root vegetables and sweet fruits. Additionally, some rare yet popular dishes like brunost(brown cheese) would be served. And the food was washed down with alcohol. 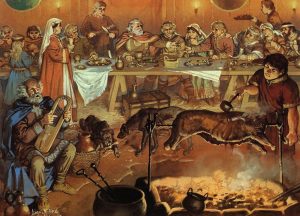 9) How did the Vikings prepare their food?

Norway’s climate is quite rough and it wasn’t possible to grow crops for almost a 3rd of the year. The Vikings came up with an optimum solution and resorted to pickling their foods. Hence most of their fruits and vegetables were pickled. Additionally, the Vikings salted and dried their meat in order to preserve it. Moreover, while cooking their food, the Vikings used walnut oil and the food was prepared and cooked on a griddle or in a cauldron.

10) Meat used in the Viking diet

The Viking diet consisted of a variety of meat. And luckily for them, meat was abundant in their region. They typically ate the meat of cows, reindeer, bears, pigs and oxen. The northern Viking settlements such as Greenland ate caribou, seal and even polar bear!

11)  According to the excavated bones found in Viking age Iceland, an important part of the Viking diet was the great auk (a large flightless bird which is extinct now).

12) Along with meat, the Vikings consumed a variety of vegetables, which included cabbage, white carrot, onions, leeks, peas and beans. They even consumed wild vegetables such as nettles, docks and cresses. 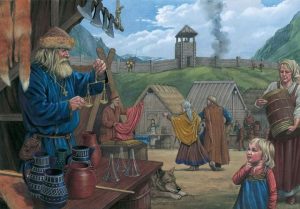 13) The Viking diet consisted of a lot of seafood

As most Vikings stayed near the coastal regions, fish was an integral part of their diet. They ate both freshwater fishes, such as salmon, trout and eels, and saltwater ones, like herring, shellfish and cod. The fish were preserved by using methods such as salting, smoking, pickling and even fermenting them in whey.

14) For the Vikings the gull’s eggs were a delicacy and these were collected from the top of cliffs. Additionally, they ate eggs from animals such as ducks, geese and chickens.

15) The Vikings typically went hunting and gathering for meat at least once a week. And each part of the animal was utilised, either for food or tools. Moreover, the animals would be slaughtered in November so that they could be preserved during the winters.

16) Due to the harsh climate of Norway, growing a variety of crops was not possible. Hence the Vikings grew crops such as barley, oats and rye. These crops were an integral part of the Viking diet. They were used to make foods such as bread, beer, porridge and stew.

17) The Vikings were resourceful bakers

The Vikings’ staple bread was flatbread but they made other types of bread as well. They made bread using rising agents such as wild yeasts, buttermilk and sour milk. They even made sourdough bread which was made by leaving flour and water starters to ferment.

Additionally, wealthier Vikings consumed fluffier bread while the average Viking consumed bread which had the dense texture of a cake and was made out of available grains.

18) Use of dairy in the Viking diet

In the Viking diet, dairy was an essential source of nutrition. The Vikings typically preserved milk in the form of cheese, whey, butter and skyr. Skyr was a yoghurt product and was considered a staple.

19) Fruits and nuts were also important foods in the Viking diet. The Vikings consumed fruits such as wild berries, lingonberries and strawberries. They typically ate nuts such as hazelnuts which grew wild.

20) For the Vikings, the only available sweetener was wild honey.

The Vikings typically boiled their meat and one of the common dishes in the Viking diet was ‘skause’, a boiled meat stew. The stew was kept on a low simmer and new ingredients were added in daily. As a result, the stew concentrated and became flavourful over time. At night the fat from the ingredients would rise and form a protective layer over the stew and when cooking heat was applied to it the next day, it would melt. Skause was eaten with bread, beans and even tree bark. 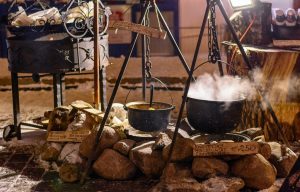 22) To bring flavour to their diet, the Vikings made use of herbs and spices such as dill, parsley, wild horseradish, mustard, coriander and cumin

23) The Vikings ate their meals in a wooden bowl and used a sharp knife and spoon as cutlery. The spoon was made from animal bone, wood or horn. Additionally, the Vikings drank their beverages from a horn, which was often decorated with metal tips.

Previous article110 Important historical facts that you must know!
Next articleOld Hollywood Glamour- in pictures