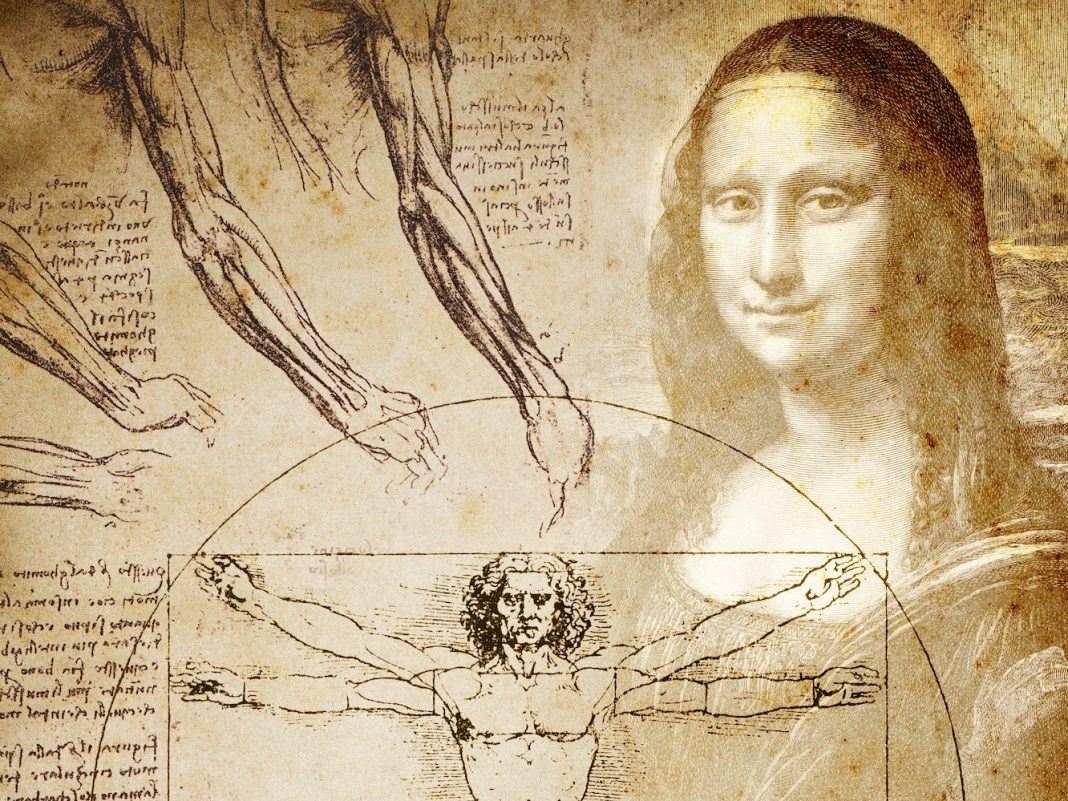 Leonardo da Vinci is one of the greatest artists of the High Renaissance period. One of his most famous paintings is the Mona Lisa, which hangs at the Louvre Museum today. In addition to being an artist, Leonardo was a master inventor as well. We have compiled a list of Leonardo da Vinci’s inventions that heavily impacted history. Read the below text to find out what did Leonardo da Vinci invent.

Let us take a look at the Top 10 Inventions Of Leonardo Da Vinci.

The answer to the question ‘what did Leonardo da Vinci invent?’ has a lot of answers. Leonardo invented various things. The first on our list is the machine gun. In an attempt to increase the firepower of a traditional cannon, Leonardo da Vinci devised a multi-barreled cannon that could be rotated to fire a line of muskets whilst another was being loaded. Additionally, its fan-shaped design allowed the machine to widen its field of fire and attack the advancing troop as effectively as possible. Ultimately, Leonardo’s concept was used commercially as a machine gun in the 19th century. 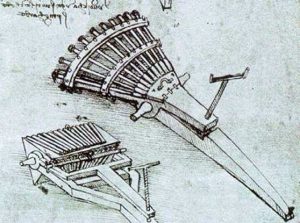 Also known as Leonardo’s robot, the mechanical knight was one of his unique inventions. The knight was essentially a humanoid automaton designed and possibly constructed by Leonardo around 1495. And it was described as being clad in German-Italian medieval armour. The astonishing fact about the robot was that it could stand, sit, raise its visor and independently manoeuvre its arms. Additionally, it had an anatomically correct jaw. The robot system was operated by wheels and gears which were connected with the help of a pulley through a cable system. Ultimately the design was patented by Mark Rosheim in the year 2002 after he successfully constructed a version of this humanoid automaton using Leonardo’s sketches. 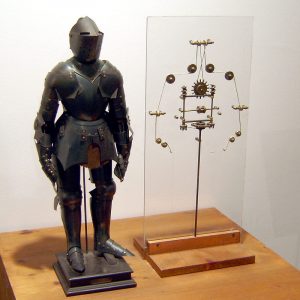 Another invention attributed to Leonardo da Vinci is the parachute. He had sketched and designed it in the 15th century. However, his design was quite different from the modern parachute. Leonardo’s parachute design consists of a sealed linen piece of cloth held open by a wooden pyramid structure, about seven metres long. According to him, it allowed man to “throw himself down from any great height without sustaining any injury”.

Leonardo’s idea was far ahead of his time and he did not have the right technology to test his invention. However, 500 years later, in the year 2000, Leonardo was proved right when Adrian Nicholas tried his parachute design and safely floated down. After his ride, he even stated that it was smoother than modern parachutes. 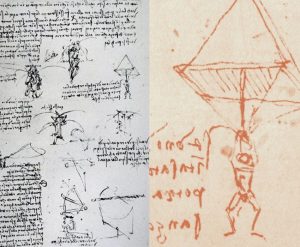 4) The ornithopter a.k.a the flying machine

Inspired by the birds, Leonardo da Vinci designed the ornithopter which was essentially an aircraft that flies by flapping its wings. Leonardo had grasped that the average human was too heavy to fly with just wings attached to them. Hence he sketched out the design of the ornithopter; a device in which the pilot lies down on a plank and pedals two large wings using manually operated levers and a system of pulleys. Once in the air, the wings would flap, much like a bird’s. 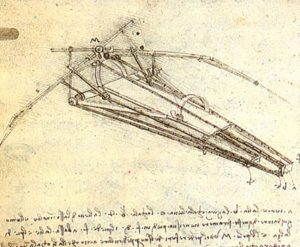 5) What did Leonardo da Vinci invent? – The Aerial screw

Leonardo da Vinci drew and designed several aerial machines, including the aerial screw. It consisted of a spinning linen aerial screw designed to compress air to induce flight. The design essentially outlines the idea of a contemporary helicopter. Additionally, Leonardo’s notes also suggest that he constructed small flying models of the aerial screw, however, due to limited technology he could never build a full-size working version. 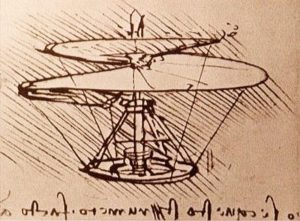 The musical instrument viola organista is also another one of Leonardo da Vinci’s invention. Leonardo presumably wanted to create a universal instrument that combined the sound qualities of a harpsichord, viola da gamba and an organ. Hence he came up with the concept of viola organista. The organ functions by pulling the instrument strings with the help of a keyboard and string mechanism towards a moving wheel which is wrapped with horsehair. This makes the strings vibrate and produce a sweet sound. Although Leonardo conceptualised the design, he never brought it into existence. However, it garnered a lot of interest after his death and many musicians invented various versions of the instrument. 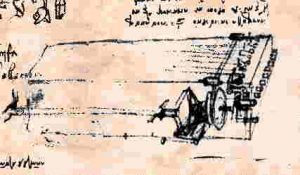 While staying in Venice, in the 1500s, Leonardo designed the scuba gear as part of an elaborate plan to attack the Ottoman ships that were attacking Venice at the time. Leonardo’s scuba gear consisted of a leather diving suit that was equipped with a bag-like mask that went over the diver’s head. The mask consisted of breathing holes, glass goggles and an inflatable wineskin to enable sinking and floating. Additionally, the diving suit also incorporated a pouch for the diver to urinate in. Leonardo considered the technology too dangerous to describe fully. Stating that “evil men would use it for assassinations and wrongfully sink ships”. 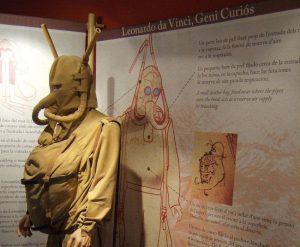 The armoured vehicle is another one of Leonardo da Vinci’s invention. While working under the patronage of the Duke of Milan, Leonardo came up with a concept that many would describe as the prototype for modern tanks. The armoured vehicle was equipped with an array of light cannons and was to be operated by four men. Additionally, its covering was inspired by a turtle’s shell and was made of wood and reinforced with metal plates.

However, the impressive machine had an error: the gears of the design were in a reversed order. This essentially made the vehicle unworkable. However, according to some sources, this was a deliberate mistake as Leonardo did not want his design falling into wrong hands and used irresponsibly. 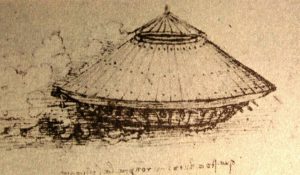 Leonardo da Vinci’s inventions were indeed ahead of their time and one such invention was the self-propelled cart. The cart was capable of moving without a push and many consider it to be the world’s first robot. The cart was powered by two symmetric coiled springs and it also featured steering and brake capabilities. The moment the brake was released, the car was propelled ahead. Additionally, the steering was pre-programmed to go either straight or at pre-set angles.

The cart’s design and its exact workings were so complex that it baffled scholars until the late 20th century. In 2006, an Italian institute brought the concept into existence and to everyone’s surprise, the cart actually worked! Furthermore, many experts note that it looked similar to the Mars Land Rover. 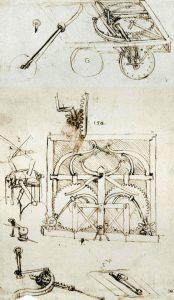 Ultimately our lists only answer a fraction of the question ‘what did Leonardo da Vinci invent?’. As the man invented a plethora of things during his lifetime. The last invention on our list is Leonardo’s anemometer. An anemometer is essentially a device that measures wind speed and direction. According to historians, it was Leonardo’s fascination with flight that inspired him to innovate the anemometer. Although he did not actually invent the device, he made several variations to the existing design by Leon Battista. Leonardo’s innovation essentially made it easier to measure wind force. 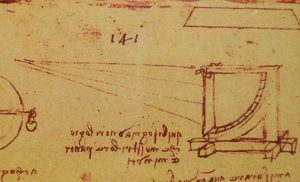