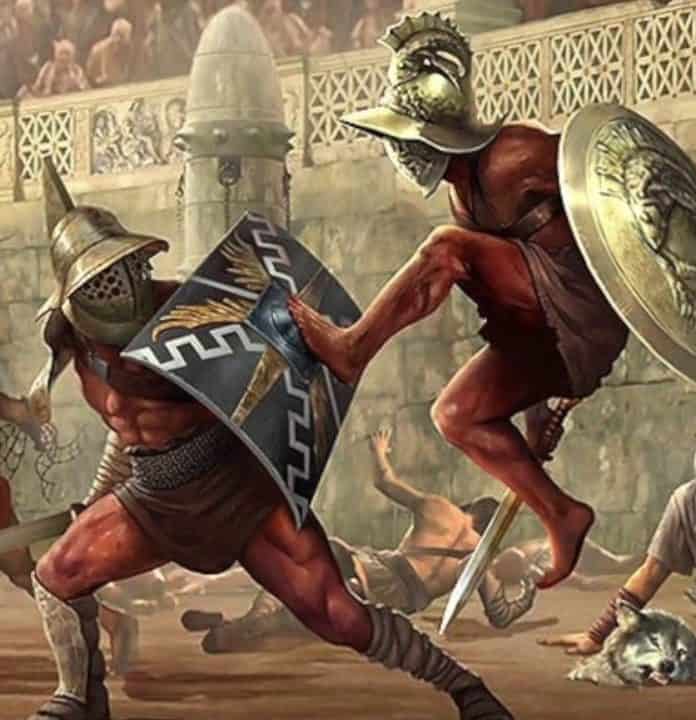 Although the ancient Romans weren’t fans of philosophy or inventions like the Greeks and Egyptians, they sure did do one thing best, which was to put up a great fight! Today’s grand but empty Colosseum gives away such powerful images; we can not start to imagine how the arena must have looked with armed ancient Roman gladiators. Despite all the risk, being a gladiator was a sense of pride. They drew thousands of spectators, including great Roman emperors like Nero. Like we honour today’s sports stars, it is essential to glorify the ancient Roman gladiators for their contributions.

Here are 19 facts about four of the greatest ancient Roman gladiators.

1. One of the most famous ancient Roman gladiators,  Spartacus left the army as he disliked taking orders

A Thracian, an Indo European tribe from Bulgaria, Spartacus was born around 111 BC. Most historians believe he led a nomadic life and Spartacus was initially a member of the Roman army. However, he wasn’t too big a fan of following orders, so he left the military for his good.

2. He was sent to gladiator school as a punishment

But, the officials captured him and appointed him as a slave as his punishment for desertion. A man named Lentulus Batiatus bought Spartacus and enrolled him in the gladiator school that he owned. Famous for its harsh regime, they fought barefoot and bare-chested.

3. Not too long after, Spartacus and 70 other slaves escaped the school, stealing kitchen utensils as weapons

Soon, with 70 other slaves, Spartacus planned and executed a perfect escape mission from the school. They fought their way to freedom with kitchen utensils.

4. However, the ancient Roman gladiator’s motives are doubted

Although Spartacus is one of the greatest warriors, there are plenty of discrepancies regarding his intentions. Some say he and the other slaves just wanted to escape, while other historians believe that he wished to march on Rome.

5. The Romans quickly realised he wasn’t an ordinary slave after his army defeated them in nine wars

Spartacus and his army began the “Third Servile War.” The Romans, although underestimated it first, quickly understood that these weren’t ordinary slaves. They defeated nine Roman armies, causing chaos in the empire. Since Rome fought two wars simultaneously with the best soldiers, Spartacus had an advantage during the fight as those who fought against him were average.

6. Sparcatus also came up with a role reversing strategy which led to several Romans killing each other

7. Sparcatus’ wife predicted that he would have an unfortunate end

After the escape, Spartacus’ wife, a prophetess, woke up one morning and saw a snake comfortably coiled around her husband’s neck. According to her, this represented “a tremendous and fearsome power that would bring him to an unfortunate end.”

8. Sadly the body of Spartacus was never found

Marcus Atilius Regulus was the general and consul during the First Punic War‘s ninth year. In 267 BC, he conquered the Sallentini and captured Brundisium while on his first term as a consul. He joined gladiator school despite being a free man in order to repay a large amount of debt.

2. His first fight was against a champion, but Regulus won

For the first time, he fought against Hilarus, who won thirteen wars. Despite that, all seemed to go his way and Regulus won. Marcus, one of the Punic naval expedition’s commanders, destroyed Cape Ecnomus’ Carthaginian fleet. Post this, he and his army invaded the Carthaginian territory. They were so successful that the officials called L. Manlius Vulso, the other consul, back to Rome. Regulus then finished the war.

3. Despite his army wanting peace, Regulus wanted a fight

The Carthaginians hoped for peace after the defeat at Adys near Carthage. However, Regulus proposed harsh terms and forced them to continue fighting. Regulus suffered a loss at Bagradas and met with jail term under Xanthippus, the Spartan mercenary general.

4. Tales suggest that the ancient Roman gladiator was tortured to death

After this, the sources of information about Regulus are not very reliable. Some say that he was in captivity till 250 BC. After the Carthaginians’ defeat at Panorumus, he was sent to Rome to negotiate an exchange of prisoners for peace. However, he urged the Roman senate to decline both offers. Regulus returned to Carthage, where the officials tortured him to death. Due to this, many Romans regard him for his heroic endurance. However, this may be a made-up tale to excuse the Carthaginian prisoners from the inhumane treatment meted by the Romans.

Undoubtedly, one of the most famous ancient Roman gladiators, Spiculus, lived in the first century AD Rome. He was initially a Thracian soldier and later captured by Rome’s soldiers, who sold him to slavery. He escaped gladiator school with 70 other slaves. Best known for his skill and speed with a sword, both the audience and Roman Emperor Nero equally admired him. Spiculus fought with courage and won several battles against many skilled adversaries. Nero adored him because of his heroism, awarded Spiculus with palaces and riches.

2. Nero killed himself since Spiculus didn’t

He looked up to him so much that when Nero’s overthrow happened in 68 AD, he requested one thing – he wished to die at Spiculus’, his favourite gladiator’s hands. However, Nero took his own life as the officials could not get hold of Spiculus in time.

1. Flamma was expected to die in a forced battle, but he didn’t

One of the biggest names among ancient Roman gladiators is Flamma. He was a Syrian soldier, thrown against a powerful opponent to meet a quick death. However, he did not meet his end soon and won several fights against the most powerful adversaries in the Colosseum’s grand arena. 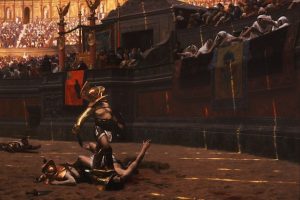 Flamma’s birth name wasn’t “Flamma.” Instead, it was Marcus Calpurnius. Flamma was his battle name meaning “flame.” However, he did every bit of justice to this name with his impeccable track record. A hero in the First Punic War, he led 300 volunteers on a suicide mission to free themselves from an army where the Carthaginians trapped them.

3. He used one small sword and created an impeccable fight history

Surprisingly, he used just one small sword and a shield along with armour, only on one half of his body. The opponents feared Flamma for almost 13 years and thousands gathered to watch him fight with just these.

4. Out of 34 battles that he fought, Flamma lost just four – making him an epic, ancient Roman gladiator

Although he died early, at the age of thirty, he fought 34 battles in total. Winning 21, 9 were a draw and losing just four.

5. He declined the great gladiator award, the Rudis, all four times

He was awarded the gladiator Rudis, a wooden sword given to gladiators who achieved their retirement or freedom, on four different occasions. However, each time, he declined the prestigious award as he wished to fight as long as he could as a Roman gladiator.

Here is a story about Lucretia – Epitome of morality and a virtuous, ideal Roman wife. Her rape by Sextus Tarquinius led to the downfall of the Roman Monarchy. Read more!